By Elizabeth Garone 27th April 2016
His job and others like it says a lot about why art matters more than ever to the binary world of technology.
A

As a kid, Ryan Germick liked to draw – a lot.

But unlike most other kids: “I never stopped,” the 35-year-old said.

And it’s paid off — turning into a career that’s at the forefront of where artists intersect with the code-filled, left-brain world of tech giants. The two sides are coming together at a rapid pace – and the need for more creative types in tech is only expected to grow. 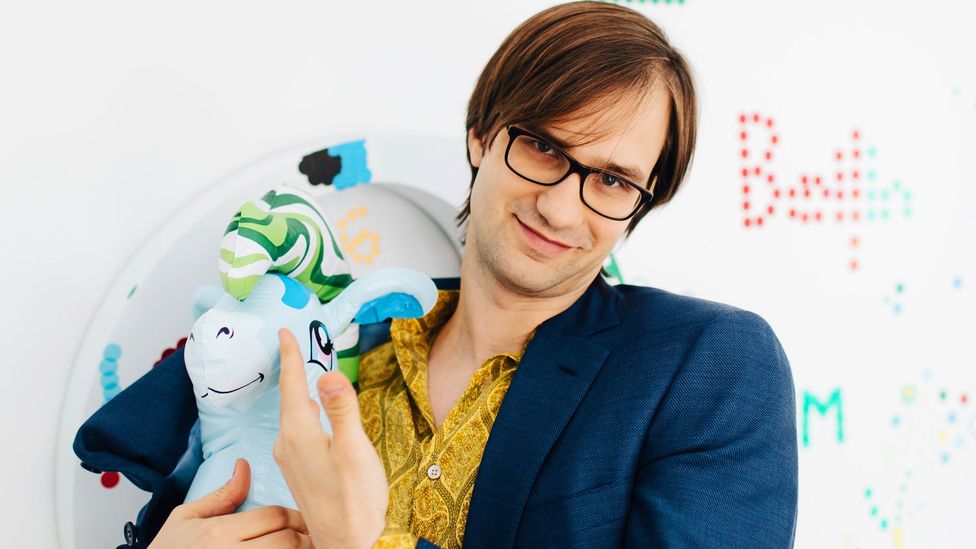 Germick’s audience has grown as well, from just his parents and four siblings to the millions of people who visit the Google homepage. Germick is the Google Doodle guy. As the chief doodler, he leads a team of about a dozen, serving as the creative and technical force behind the changing Google logos, better known as “doodles,” that inhabit Google’s otherwise static search homepage.

For Germick, it was a winding route from sketching into the world of technology. “I had no clear path to Google,” he said. “It never crossed my mind that I would work on Doodles.”

Harnessing the power of the internet

Google was the first – and only – place he applied. The year was 2006. He was hired as a web graphic specialist, said Germick.

“I was exactly the opposite of a specialist. I was a generalist and I would do a lot of icons,” he said. But it was the start of a change in the way images as simple as logos could impact how people used, felt, and talked about the internet.

Germick’s best known icon is the Google Maps’ Pegman, the little yellow figure that still pops up today when you use Google’s Street View setting on its maps. He even put on an orangey-red unitard with yellow appendages to star as Pegman in a cheesy YouTube video made for Street View’s launch. It was Google’s first viral video, watched nearly 13 million times. Nearly nine years later, Germick still winces a little when he talks about it.

The outcome is digital, but the process starts simple. (Credit: Google)

Germick eventually landed a position on the Doodle team and worked under the tutelage of Dennis Hwang, considered the father of Google’s doodles. It was the internet that really honed Germick’s ambitions as an artist. “If you make a painting, only one person can own it. It inherently becomes something for the wealthy,’ he said. “It got me thinking. I want to communicate with everybody. It really made me think first about printmaking, then digital work, because it could easily be distributed. And then suddenly the internet was available.”

And that’s where the crux of the opportunity between creativity and technology comes in. “Design thinking goes way beyond the visuals. It is as much problem-solving and creativity from a functional and usability perspective as it is aesthetic,” said Melissa Simson, director of ad product for Kargo, a New York-based mobile advertising company. And the demand for those skills is constantly growing. 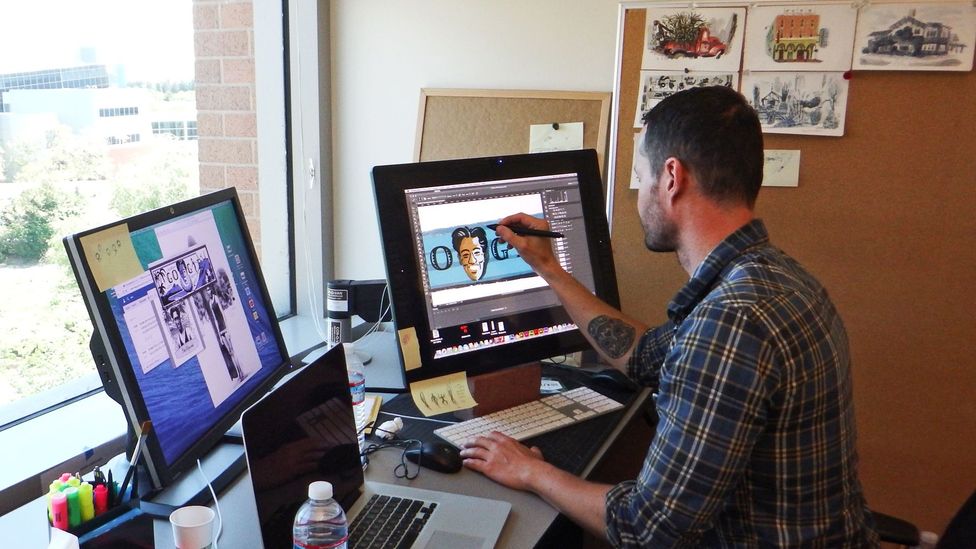 Matt Cruickshank, a member of the doodle team, at work. (Credit: Elizabeth Garone)

“The next generation of tech will place a higher regard on design capabilities at the centre of innovation,” she said.

Being a successful Google doodler requires a number of cross-functional skills, said Germick. Among them: a strong work ethic, a willingness to learn, a sense of humour, an appreciation of the creative process, and at least one expressive talent. The job really is about a melding of art and technology.

“Since our medium allows for both visual expressions and technological interactions… the stronger your skills are in either discipline, the more effectively you can communicate with the end output,” he said. “Understanding a bit about the other makes for better collaborations.”

Now, Germick oversees a staff of a dozen or so designers and engineers at Google headquarters in Mountain View, California, and the team works with hundreds of other Doodle staffers in Google offices around the globe. Google doodles have gained notoriety for their ability to slow down worker productivity (people spent a total of 4.8 million hours playing the PAC-MAN 30th anniversary doodle in the two days it was up back in 2010, according to time management firm, RescueTime) and to teach people a thing or two about an unknown hero or heroine (the Italian mathematician Marie Gaytana Agnesi, anyone?) as well as their ability to anger some people (when they chose civil rights’ activist Cesar Chavez’s 86th birthday rather than Easter in 2013).

Doodles are not just good for visitors to the site, according to Tampa, Florida-based branding expert Karen Post. They are a “brilliant” move for the company, she said. The first Google doodle ran in the late summer of 1998 when founders Larry Page and Sergey Brin wanted a fun way to let people know that they were out of the office while they headed to the Burning Man Festival. They posted the simple festival stick figure behind the second “o” on the Google logo.

A brand asset for tech

“What started as being a purposeful notification has morphed into a signature brand asset,” said Post. “Allowing the logo to change the way it does keeps the brand in the news.” 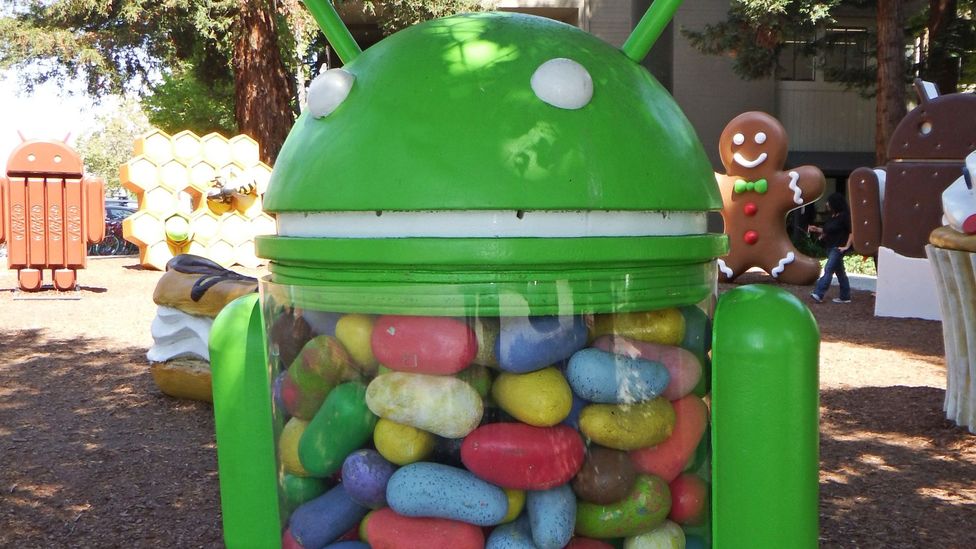 Doodlers are at the intersection of creativity and technology. (Credit: Elizabeth Garone)

The doodle and Google accomplish this without feeling gimmicky, said Asher Feldman, a New York-based digital strategist with digital consultancy Centric Design and former social media analyst. “Especially today, when every person or company is looking to inject themselves into the ‘conversation’ one way or another, the Google Doodle kind of endures as an effective way to accomplish exactly that without appearing to pander,” he said. “I think a lot of companies get stuck desperately trying to get in on the newest or latest hashtag or trend on social media.”

It’s really exciting to see ones that push the technology.

Germick says he doesn’t have a favourite doodle, but that “it’s really exciting to see ones that push the technology”. For example, giving users the opportunity to play a virtual guitar in honour of guitarist Les Paul’s 96th birthday or create their own tunes with a Robert Moog-inspired synthesizer and then share them with friends. Plus, he enjoys watching the power of the web take the interactive doodles further. “You get to feel like Robert Moog must have felt: ‘I made this tool and people can be really creative with it’,” he said.

Some doodles do make a statement – like the one Germick helped create for the 2014 winter Olympics in Sochi, where controversy surrounded the Games due to host country Russia’s anti-homosexual laws. “It’s also about doing doodles that just feel like they’re the right thing to do,” he said.

The Sochi doodle featured rainbow colours over images of winter athletes and an Olympic Charter quote about how there should be no discrimination against athletes. “We were able to celebrate sports and everyone coming together for the Olympics but also [that we] stand behind LGBTQ athletes,” said Germick. 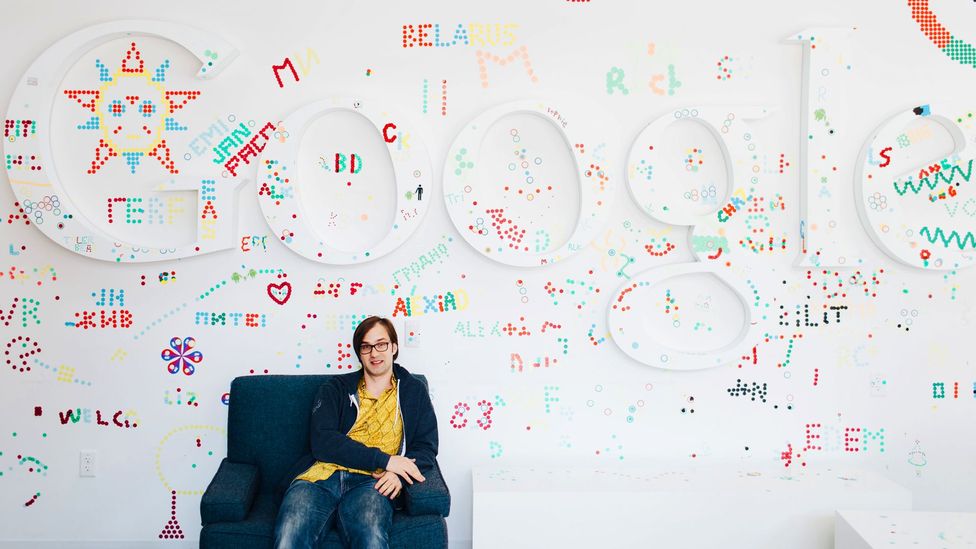 Ryan Germick had been drawing since he was a child. (Credit: Google)

In order to be hired for a creative job in tech, you have to be thinking about this bigger picture, said Simson, of Kargo. “Show your ability to solve problems creatively and know the industry or the technology from a consumer point of view and have an opinion on it,” she said. “Don’t forgo the details. Tech is a very detail-oriented field, and we look for clean design above all. So when you present us with your portfolio, make sure there is intent behind every design decision.”

At the the Rhode Island School of Design, where a number of Google’s Doodle staff gained degrees, Kevin Jankowski, director of the school’s career centre, is constantly reminding students to think beyond the direct application of their art and design skills and to “realise their role in the development of the company's systems, structure, management and business strategies,” he said.

Companies are often unaware that design students have these skills, and it is up to the students to show them, Jankowski said.