The global construction boom has created huge demand for sand – even in cities surrounded by the coarse commodity.

Sand. We take it for granted. From deserts to beaches to children’s playgrounds, it seems ubiquitous. Yet the abundant resource is feeding a global land grab that’s even bred a sand-smuggling underworld.

I was shocked that people would fight for sand.

While researching beach erosion in Negril, Jamaica about six years ago, scientist Pascal Peduzzi’s conversation with residents in a fishing village left him astounded. Despite the high-tech geospatial modelling and remote sensing tools he was using to survey the damage, he’d never have surmised one reason for erosion on the country’s western coastline. Locals told him about the local mafias — armed men who came to the beach in the middle of night, hauled away bags of sand and sold them for the construction of beachfront developments.

“I was shocked that people would fight for sand,” said Peduzzi, director of science at the United Nations Environment Programme’s Division of Early Warning and Assessment. “I have been working for more than 20 years in the environment sector, but sand came to me as a surprise.” 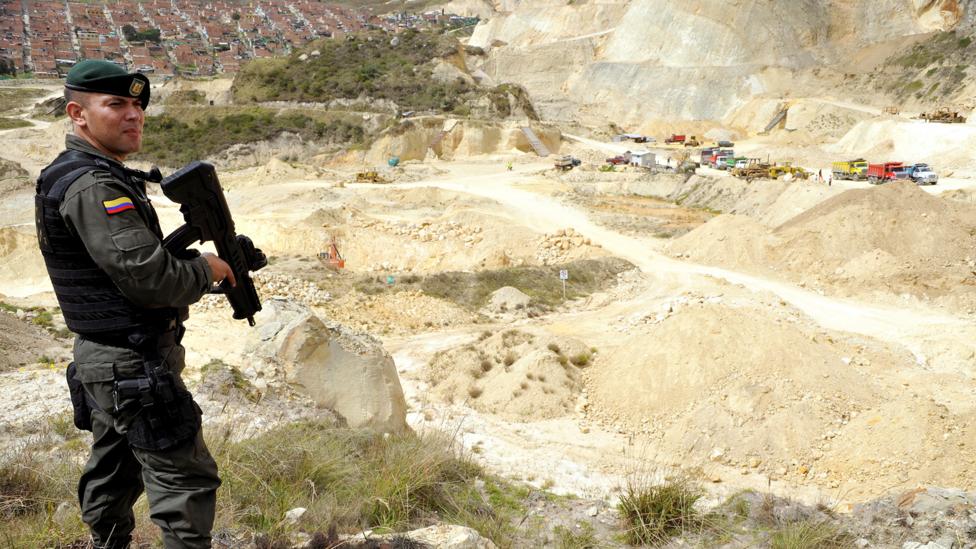 Demand for sand has led to the emergence of illegal mining of the material – here, a police officer stands guard in a quarry near Bogota, Colombia (Credit: Getty Images)

As a building material, sand has withstood the test of time. In 3500BC, ancient Egyptians and Mesopotamians were using sand, mostly formed when wind and water grind rocks into silica-rich grains, to make glass. Today, builders the world over use the natural resource, found in quarries, rivers, lakes and oceans, for many of their materials including paint and cement.

It’s used in everything from swimming-pool filters, metal castings and oil wells to smartphone screens and toothpaste.

With a global building boom and the arrival of hydraulic fracturing technology for oil and gas in the United States, the demand for sand has been skyrocketing. In 2014, 196 million tons of sand and its bigger counterpart gravel were mined around the world, according to the US Geological Survey. After water, it’s the most abundantly used natural resource, Peduzzi said. It’s used in everything from swimming-pool filters, metal castings and oil wells to smartphone screens and toothpaste.

The overall sand and gravel market was valued at $8.3bn in the US last year and £1.7bn ($2.5bn) in the UK in 2013, according to the USGS and the UK’s Mineral Products Association. Global demand for sand is expected to rise 5.5% a year through 2018, according to a December 2014 report from the Freedonia Group. Investors willing to weather the volatility, sift through the fragmented market and take on potential environmental risks could stand to profit from the growing appetite for this global commodity.

Demand for sand is spread unevenly across the globe.

Building booms in China and India have increased the need for sand in those markets. Globally, China accounts for a fifth of the world’s sand imports, according to the Trade Statistics Branch of the United Nations.

Because of the frenzied development of new dams, roads, buildings and factories the country has used more sand in the last four years than the US has in the last century, according to Peduzzi. China has even been piling huge amounts of sand onto reefs to create new islands and expand its foothold in the South China Sea. 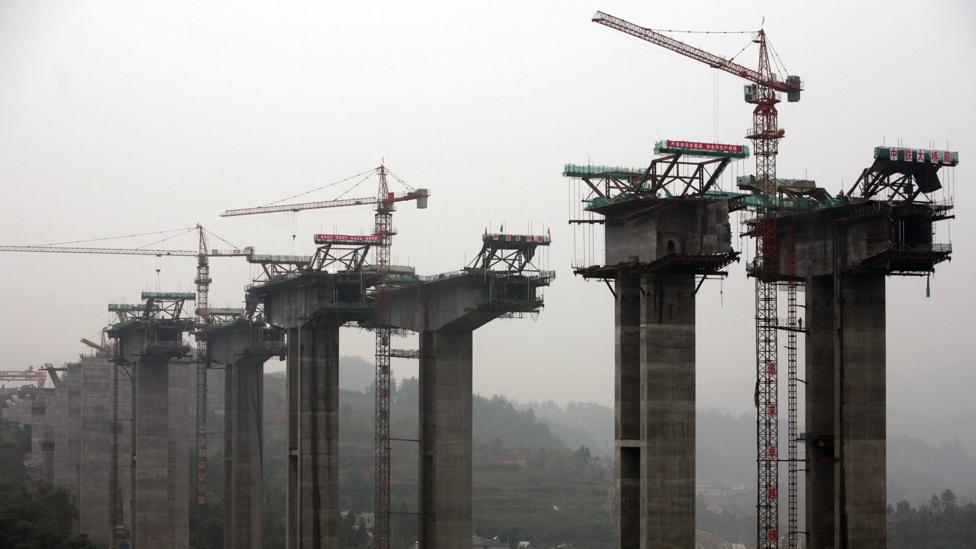 China’s construction boom means it needs a huge amount of sand – it currently accounts for a fifth of the world’s imports (Credit: Getty Images)

Even the United Arab Emirates imported $456m worth of sand, stone and gravel in 2014, according to the UN. Despite being in the heart of the desert, imported sand built Dubai, according to Pascal. Wind-formed desert sand is too smooth for construction.

Meanwhile, in the UK, the need for sand has dropped off as new construction cools and recyclables get a political push. Demand for rock, gravel and sand is 25% below 2007 levels, according to the UK Mineral Products Association.

And in the US, the rise of hydraulic fracturing or “fracking” has created a huge appetite for sand. In 2013, the production of sand for fracking wells was 19 times higher than a decade earlier, according to the USGS. The process involves injecting water, sand and chemicals down a horizontally drilled well thousands of feet below the earth’s surface into a rock formation to extract oil or natural gas. 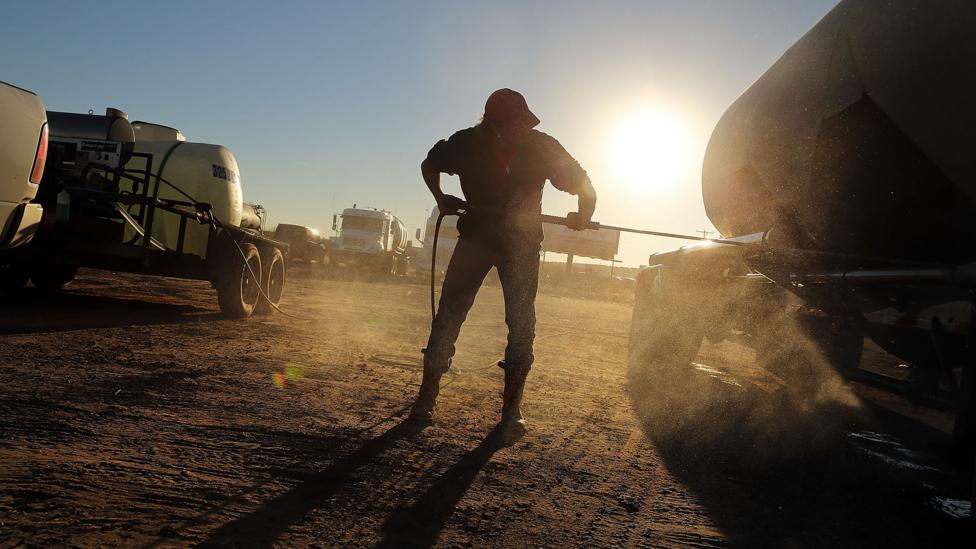 The massive growth in fracking in the US has created a large appetite for sand, which is used in the process (Credit: Getty Images)

But even as oil prices tail off, demand for sand is growing, largely due to the increased amount of sand going into wells in an attempt to extract more oil, according to Marc Bianchi, a managing director at Cowen and Company. As fracturing technology becomes better at extracting more oil per well, the amount of sand used per well has also doubled, from 2,000 tons a well in the second quarter of 2013 to 4,400 tons in the fourth quarter of 2015, he said.

It takes deep pockets and pioneering spirit to buy up a sand mine or offshore facility directly. Many countries regulate sand extraction, handing out a limited number of licenses to prevent overmining. And the technology to extract, process and transport sand will likely be far too expensive for individual investors.

Even investing in existing sand companies requires untangling complex layers across the value chain, from smaller mom-and-pop operations that may own a single mine, to large multinational players like Belgium-based Sibelco Group, a 144-year-old company that operates in 41 countries, or Germany’s Heidelberg Cement, which makes and sells cement in 40 countries and owns and operates sand facilities globally. 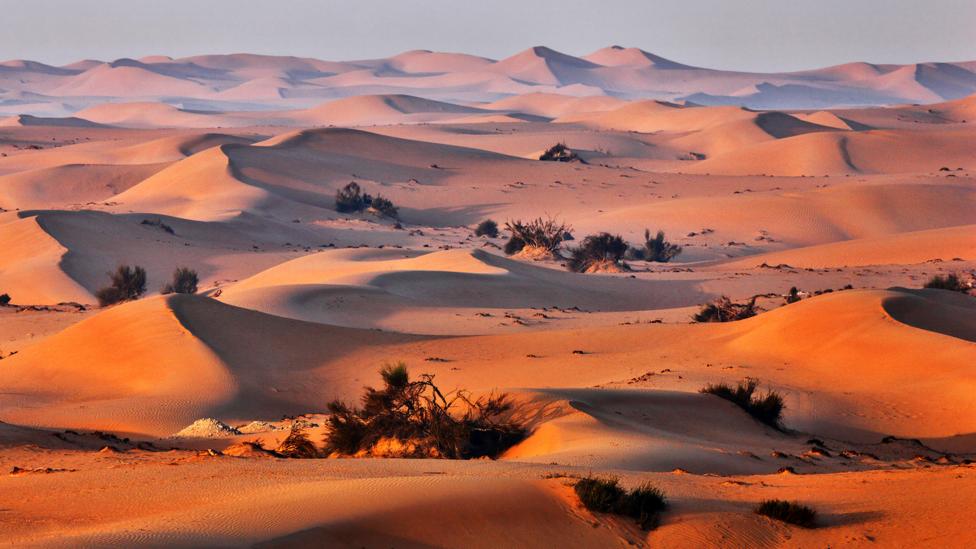 Desert sand is too smooth to be used in construction (Credit: Alamy)

For the most part, the highly fragmented market is regionally focused. On the European side, the European Association of Industrial Silica Producers maintains a comprehensive list of major players on the continent.

In the US, 230 companies have 335 sand operations across 35 states, according to the USGS. Within the past few years, four US sand companies have started selling shares on the New York Stock Exchange and Randhawa has “buy” ratings on all them. Two of the companies — Emerge Energy Services and Hi Crush Partners — focus exclusively on the frac sand market, while Fairmount Minerals and U.S. Silica also have industrial sand operations. Because of their recent listings, Randhawa said that it’s tough to track returns, but with unpredictable oil prices, investors willing to take the risk should be prepared for volatility. 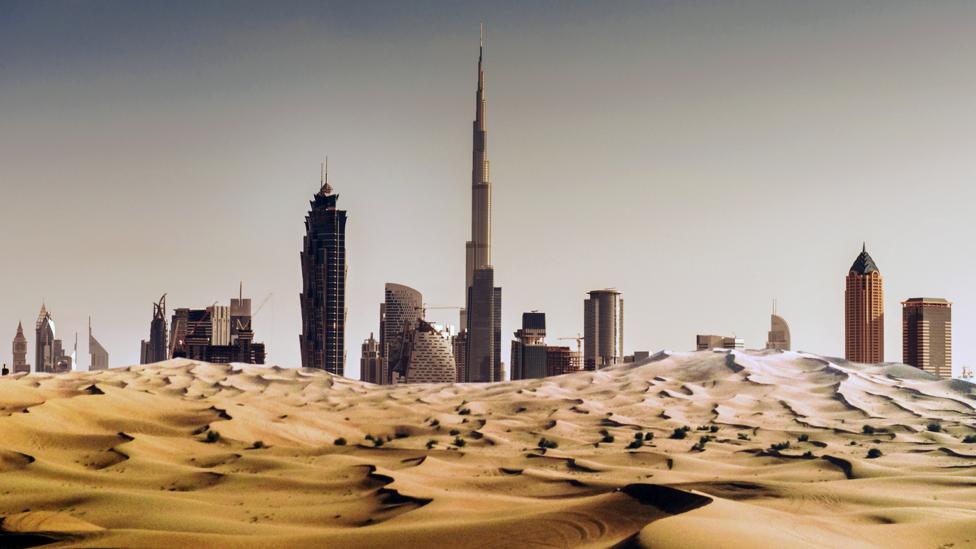 Both Randhawa and Bianchi believe that U.S. Silica, which has been around since 1900, is best prepared to survive the roller coaster. They said the company’s long-standing customers provide the company a stable source of revenue even if demand for frac sand levels off. Plus, the company has been churning out new sand-related products such as adding antimicrobial coating to swimming pool-filter sand.

Finally, there are legal and environmental concerns to think about around the world. Beaches have eroded on average 40m from 1968 to 2008, according to Peduzzi. In some areas, such as South Carolina and California in the US, erosion from overmining and global warming has measured hundreds of metres. In other parts of the world, islands have disappeared altogether.

“We do still have a huge amount of sand,” said Peduzzi. But “because we use it so much, sand is becoming rare. That’s not to say we should stop using sand, but we should be a bit more cautious.”

This story was produced under the BBC's guidelines for financial journalism. A full version of those guidelines can be found at bbc.co.uk/guidelines.