Loading
Health
Can you work yourself to death?
Share using EmailShare on TwitterShare on FacebookShare on Linkedin 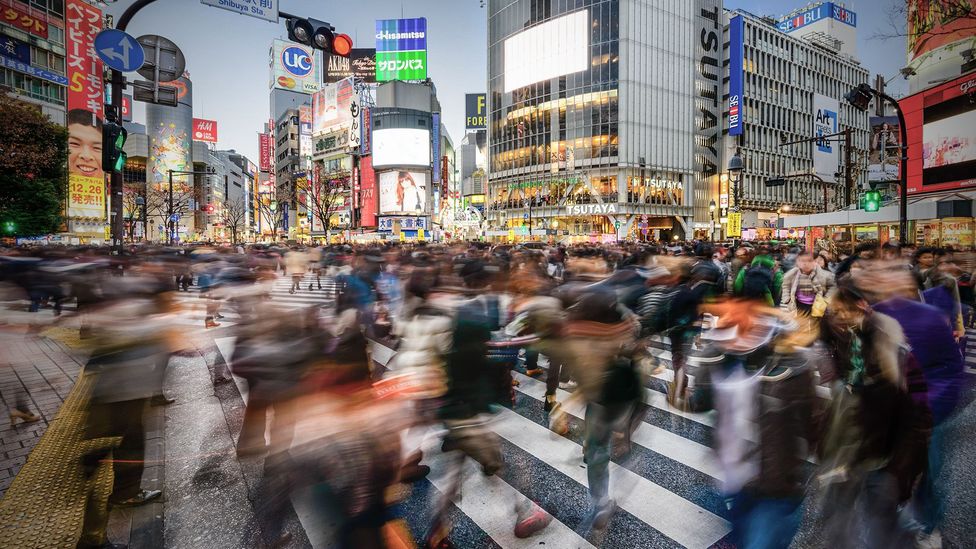 By Zaria Gorvett 13th September 2016
‘Death from overwork’ is so common in Japan there’s even a word for it. But is it physically possible?
T

The Japanese have a knack for inventing words – and there are some that every self-respecting office worker should have in their vocabulary. There’s arigata-meiwaku: when someone does you a favour that you didn’t ask them to – which actually caused you massive inconvenience – but you’re socially obliged to thank them anyway. Or how about majime: an earnest, dependable colleague who can get things done without causing any drama.

But there’s one uniquely Japanese term you don’t want to relate to: karoshi, which translates as “death by overwork”.

Reports of the nation’s corporate breadwinners, known as “salarymen”, dropping dead from overwork have been making headlines for decades. 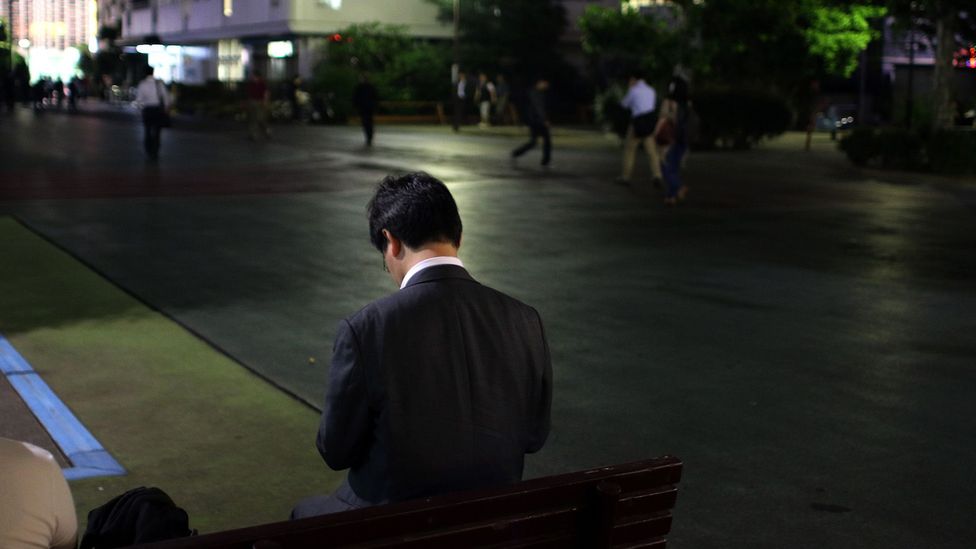 Death from overwork is a recognised problem in Japan – some put the number of deaths as high as 10,000 (Credit: Getty Images)

But is it just urban legend?

Well, no. The social phenomenon was first recognised in 1987, when the health ministry began logging cases after the sudden deaths of a string of high-flying executives.

After the defeat of the Second World War, the Japanese worked the longest hours in the world by far – they were workaholics of the highest order - Cary Cooper

So widespread is the issue, that in Japan, if a death is judged karoshi, the victim’s family receives compensation from the government of around $20,000 per year and company payouts of up to $1.6 million.

Initially, the government was documenting a couple of hundred cases every year. But by 2015, claims had risen to a record high of 2,310, according to a report by the Japanese Labour Ministry. This may be the tip of the iceberg. According to the National Defence Council for Victims of Karoshi, the true figure may be as high as 10,000 – roughly the same number of people killed each year by traffic. 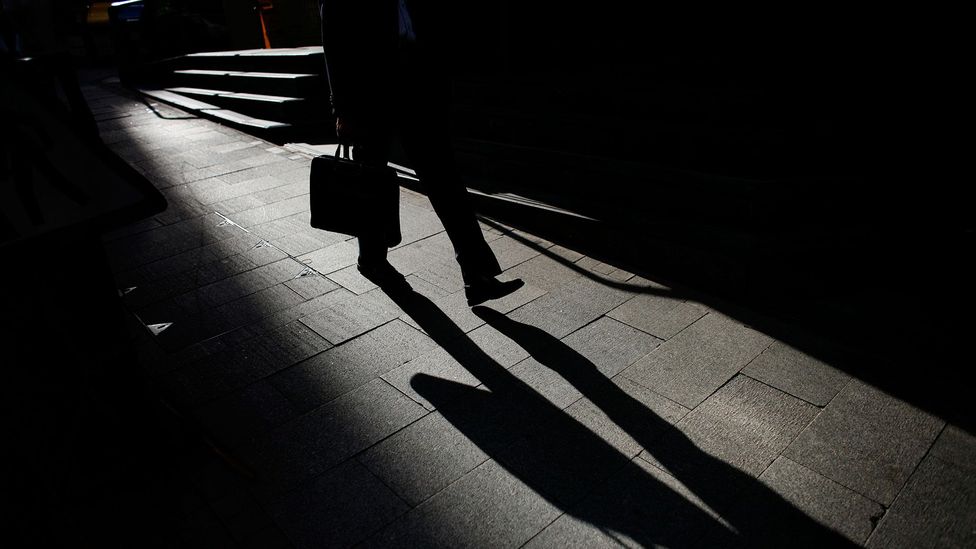 But can you really die from overwork? Or is it just a case of old age and undiagnosed medical conditions? In an increasingly well-connected world, where technology keeps us in the loop 24-7, work hours are creeping up. Could karoshi be going on unrecognised elsewhere?

A typical case of karoshi goes something like this. Kenji Hamada was an employee at a Tokyo-based security company, with a devoted young wife and formidable work ethic. His typical week involved 15-hour days and a gruelling four-hour commute. Then one day he was found slumped over his desk; his colleagues assumed he was asleep. When he hadn’t moved several hours later, they realised he was dead. He had died of a heart attack at the age of 42.

Though Hamada died in 2009, karoshi claimed its first victim 40 years earlier – when a healthy 29-year old suffered a stroke after pulling punishing shifts in the shipping department of the nation’s largest newspaper.

At the bubble economy’s peak, nearly seven million people were grinding out a 60-hour work week

“After the defeat of the Second World War, the Japanese worked the longest hours in the world by far – they were workaholics of the highest order,” says Cary Cooper, a stress expert at Lancaster University.

Decades later, in the mid-1980s, it took a dark turn. Abnormalities in the country’s economic system fuelled a rapid and unsustainable escalation in the prices of shares and real estate. The resulting economic growth spurt, known as the “bubble economy”, pushed Japan’s salarymen to their limits. 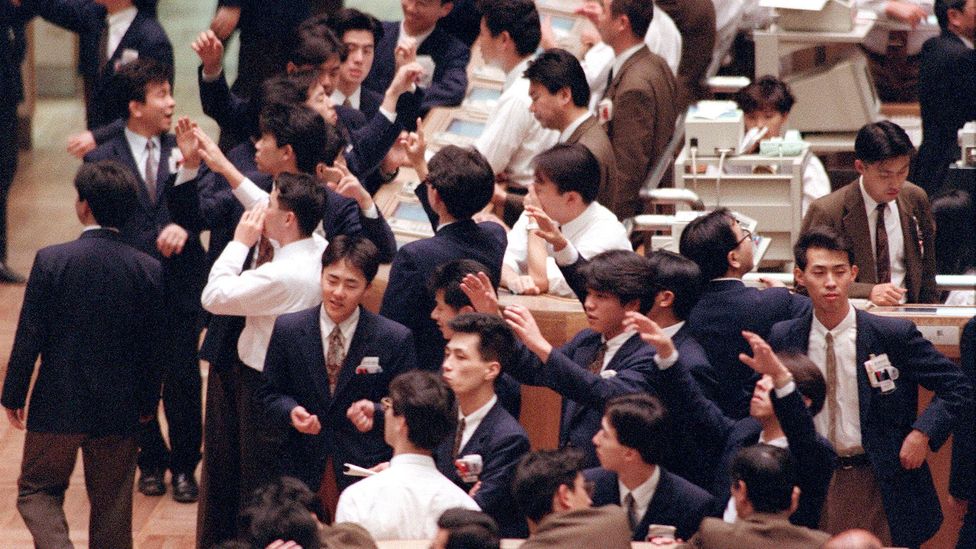 Dealers work on the floor of the Tokyo Stock Exchange in March 1992 (Credit: Getty Images)

At the bubble economy’s peak, nearly seven million people (around 5% of the country’s population at the time) were grinding out a 60-hour work week. Meanwhile, the US, UK and Germany were mostly still cruising along on a more forgiving nine-to-five work schedule.

In 1989, 45.8% of section chiefs and 66.1% of department chiefs in major companies thought they themselves would die from overwork

According to a survey conducted in 1989, 45.8% of section chiefs and 66.1% of department chiefs in major companies thought they themselves would die from overwork.

By the late 1980s, enough white-collar workers were dying from overwork each year that the government began to pay attention. Karoshi became a matter of urgent public concern and the Ministry of Labour started publishing statistics.

When the economy’s bubble collapsed in the early 1990s, the culture of overwork only got worse. During the following years, known as the “lost decade”, karoshi reached epidemic proportions; deaths of those in management and professional roles spiked and it has never recovered.

The deaths of middle-aged men with underlying health conditions, such as heart disease or diabetes, would be one thing. The deaths of young, otherwise healthy people in their prime – doctors, university professors and engineers – are altogether more alarming. 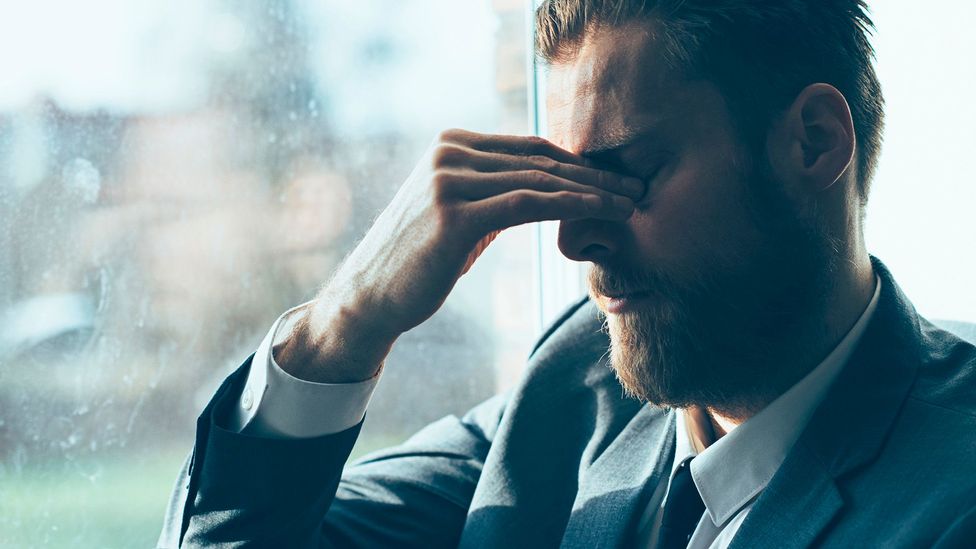 Stress can lead to harmful habits such as smoking and drinking – which in turn can lead you to an early grave (Credit: iStock)

Can overwork be lethal?

Among the thousands of varied cases, two potential culprits stand out: stress and a lack of sleep. Can these things kill you? And how long do you have to spend in the office before you keel over?

Among the thousands of varied cases, two potential culprits stand out: stress and a lack of sleep

Going to work the day after pulling an all-nighter can certainly make you feel terrible. But, the evidence that a lack of sleep can kill you is surprisingly scarce.

While there’s plenty of evidence that a lack of sleep can kill you indirectly – through an increased risk of heart disease, disorders of the immune system, diabetes and some forms of cancer – no human death has ever been attributed to intentionally staying awake. It’s not going to be good for you in the long-term, but it seems unlikely you’ll spontaneously drop dead after an all-nighter in the office.

The Guinness World Record for the longest period awake belongs to Randy Gardner, who stayed awake for 264 hours (11 days) in 1964

The Guinness World Record for the longest period awake belongs to Randy Gardner, who stayed awake for 264 hours (11 days) in 1964. On his final day, he attended a press conference where he spoke without slurring his words – then slept for 14 hours and 40 minutes. He’s still alive and lives in San Diego. 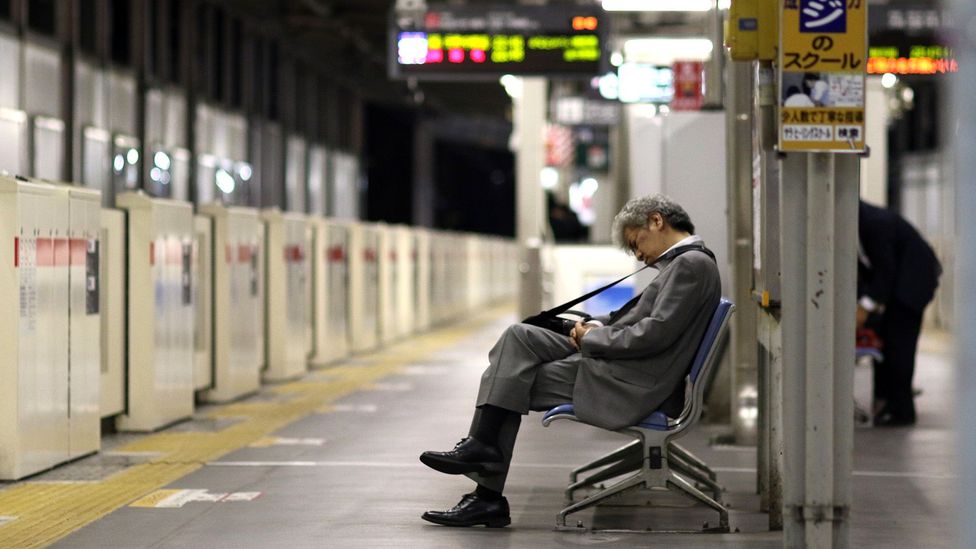 A lack of sleep can cause serious illness (Credit: Getty Images)

And contrary to what you might expect, there’s currently no evidence that stress – on its own at least – can cause a heart attack or even heart disease either. Though it might lead you to bad habits (smoking, drinking, or a poor diet) which will.

But what if you include deaths from insidious illnesses such as cancer? It’s commonly thought that stress is lethal, but last year a team of Oxford University scientists decided to take a closer look. The so-called Million Women Study tracked the health of around 700,000 women for nearly a decade. In that time, 48,314 died.

When they analysed the data, the researchers found that women who rated themselves as more stressed and less happy, healthy and in control were more likely to die. But they were also less healthy to begin with – they were stressed because they were sick. When they factored this in, along with risky behaviours such as smoking, the link vanished. Stress and unhappiness had no correlation with the risk of death.

It looks like even a really, really stressful day, month, or year in the office isn’t going to send an otherwise healthy person to an early grave.

Intriguingly, karoshi might not be caused by stress or a lack of sleep, but time spent in the office

Intriguingly, karoshi might not be caused by stress or a lack of sleep, but time spent in the office. By analysing the habits and health records of more than 600,000 people, last year researchers found that those who worked a 55-hour week were a third more likely to suffer a stroke than those working fewer than 40 hours. It’s not known why, but the authors speculated it might simply be the result long periods sat at a desk.

The thing is, the Japanese don’t work the longest hours anymore. As of 2015, the average Japanese worker clocked less time than those in the United States – let alone the global leader of overwork, Mexico, where they toiled for a staggering 2246 hours.

As you would expect, reports of karoshi outside Japan are racking up. China loses around 600,000 people to guolaosi – as it is known locally – every year, around 1,600 every day.

“India, South Korea, Taiwan, China – the next generation of emerging economies is doing the same thing, they are following the post-war Japanese movements towards long hours,” says Richard Wokutch from Virginia Tech, Virginia, a management Professor who has authored a book on occupational safety in Japan.

“Haven’t we had cases in the city of London? There’s just no word for it,” says Cooper. He’s right. In August 2013, Bank of America Merrill Lynch intern Moritz Erhardt was found dead in his shower after working for 72 hours straight. The 21-year-old was found to have died from epilepsy, which could have been triggered by working so hard, an inquest was told. Following his death, the bank restricted the intern workday to 17 hours.

In many countries part of the problem is not so much the culture of working hard, but being seen to be doing so

So could a culture of presentee-ism be to blame? According to Cooper, yes. In many countries part of the problem is not so much the culture of working hard, but being seen to be doing so. “Nowadays it’s more about showing facetime at work – arriving early and staying late – but it’s counterproductive,” he says. 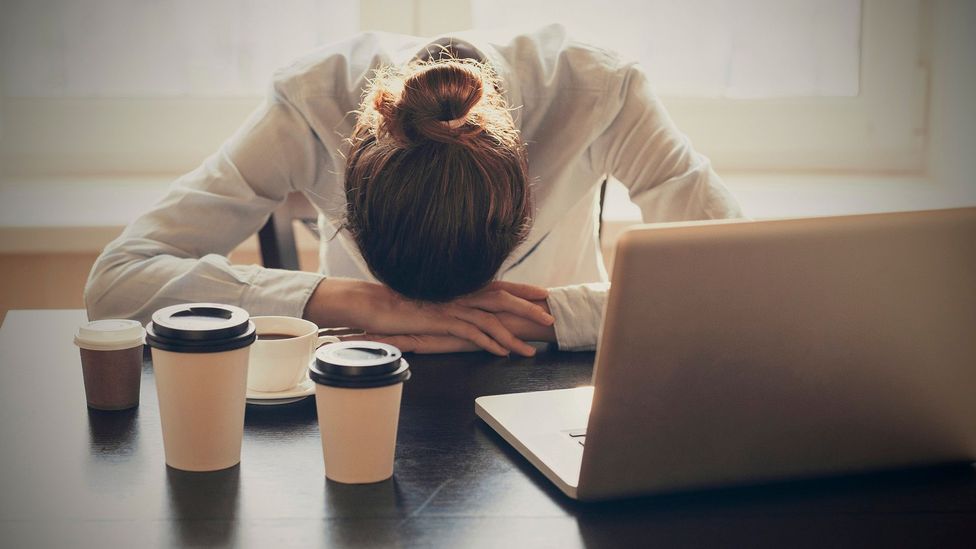 A lack of sleep can contribute to deadly illnesses – but no-one has died just from intentionally staying awake (Credit: iStock)

In Japan, many younger workers feel uncomfortable leaving before their bosses do. “When I was working over there, people would take out a newspaper at the end of the normal working day. They didn’t leave but – though they could have been reading the business section – they also weren’t exactly hard at work,” says Wokutch.

So the next time you find yourself at work, updating your status on social media or reading about absurdly specific Japanese words on the internet, remember: staying later might be a risky way to make up for it.

Owning Your Time
1Is full-time work bad for our brains?
worklife
2How your bad boss is slowly killing you
worklife
3China’s high-pressure start-up world
Around the BBC