With apps taking over our lives, there’s a movement afoot as people yearn for simpler, technology-free times.

Every January, Angela Ceberano sets goals for the 12 months ahead. And on Sunday nights, she plans and organises the coming week.

Sometimes, I just want to get rid of all the technology and just sit down in a quiet space with a pen and paper

But instead of spreadsheets and fancy smartphone apps, the Melbourne, Australia-based founder of public relations firm Flourish PR, uses notepads, an old-fashioned diary, coloured pens and a stack of magazines. With these, she brainstorms, makes lists and creates a vision board. 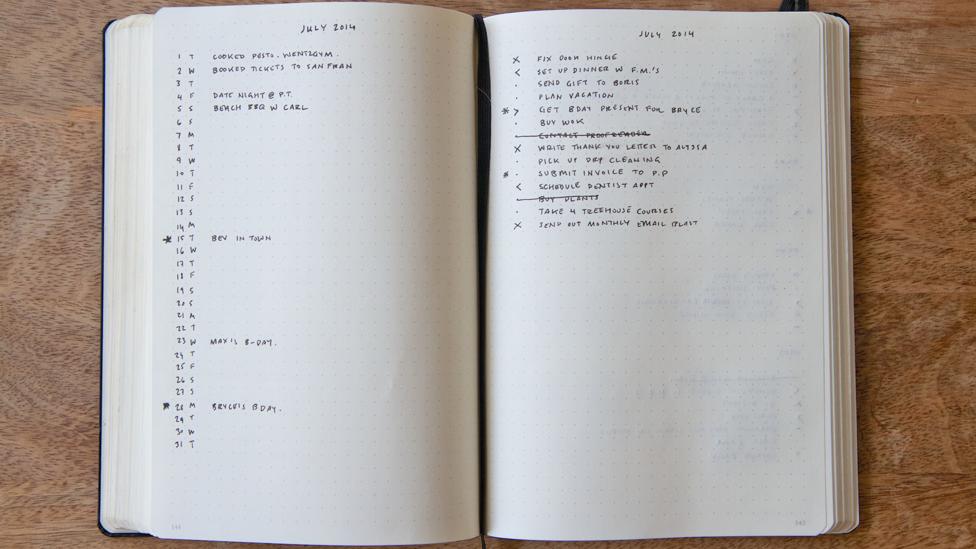 Sales of stationery have boomed in no small part due to the popularity of 'bullet journaling' (Credit: bulletjournal.com)

Ceberano is anything but a technophobe. A digital native with a strong social-media presence, she splits her time between traditional and new media, and between Australia and San Francisco, where some of her start-up clients are based. For certain tasks, she just prefers the simplicity, flexibility and tactility of the page.

“Sometimes, I just want to get rid of all the technology and sit down in a quiet space with a pen and paper,” she says. “There are so many apps out there and I feel like no one app gives me everything that I need. I've tried and really given them a go, doing those to-do lists of having your priorities or brain storming using lots of different apps … [but] when I get a pen and paper, or when I'm using my old-fashioned diary and pen, it just feels more flexible to me. I can always pull it out. I can focus.” 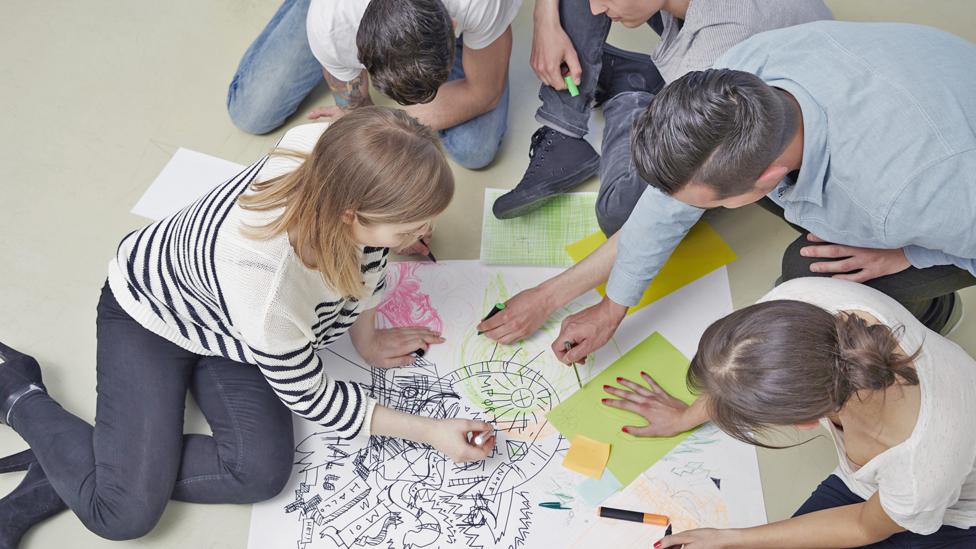 She's not alone. A quick scan of social media illustrates a quiet return to the humble charms of stationery and lettering. Many people are using cursive writing and colouring in to help organise their lives or work on certain goals — whether it's fitness, finances, or fast-tracking their careers. And, despite the proliferation of apps, other back-to-basics ideas have gained popularity online.

The science behind it

Science suggests these traditional types might be on to something. While technology can certainly provide an edge for certain tasks, digital overload is a real and growing concern. A 2010 study by the University of California at San Diego suggests we consume nearly three times as much information as we did the 1960s. And a report by Ofcom in the UK  says that 60% of us consider ourselves addicted to our devices, with a third of us spending longer online each day than we intend. So are we doing too much, and are our screens too distracting? Possibly. For instance, many studies indicate that multitasking is bad for us and makes our brains more scattered.

Other findings show that pen and paper have an edge over the keyboard. Research by Princeton University and the University of California at Los Angeles, published in 2014, showed that the pen is indeed mightier than the keyboard. In three studies, researchers found that students who took notes on laptops performed worse on conceptual questions than students who took notes longhand. Those who took written notes had a better understanding of the material and remembered more of it because they had to mentally process information rather than type it verbatim. And, another study, published in the Journal of Applied Cognitive Psychology, showed that people who doodle can better recall dull information.

Certainly, the concept of goal setting without technology isn't new. It’s the way anyone did anything pre-Internet. 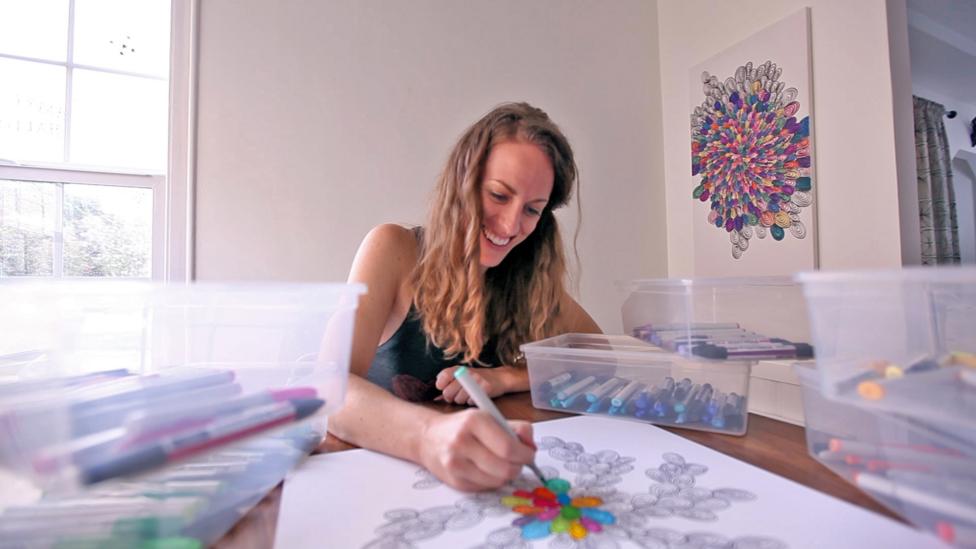 Amy Jones started selling goal-tracking art after a visual aid helped her pay off $26,000 in debt. Each swirl on her canvas represented $100 paid off (Credit: Map Your Progress)

The difference now is that there’s a return to traditional techniques by the digitally savvy. Many are successful vloggers, work in tech, or are experts in new media. And this latest trend has helped boost sales of stationery like Moleskine and Leuchtturm1917 notepads, the companies say. For its part, Moleskine has seen double-digit growth annually over the past four years, according to Mark Cieslinski, president of Moleskine America. Leuchtturm1917 marketing manager Richard Bernier says it was about June 2016 when sales went viral, due in no small part to the popularity of bullet journaling, a popular form of list-keeping, among the online community.

So, with the proliferation of technology specifically designed to aid productivity and efficiency, what's the enduring appeal of simpler tools?  For starters, a notepad will never run out of batteries or have a screen freeze half way through a task. You can't accidentally delete something. It won't ring, or ping or pester you with constant social-media and email updates. And you can sketch, draw a diagram or stick-figure illustration — sometimes a picture is worth a thousand words — which isn’t as easily done on a smartphone.

For Amy Jones, creator of Map Your Progress, which involves goal-tracking through art, creating a visualisation helped her pay off $26,000 in debt. Inspired by the visual aids used by her mother, who worked in sales, Jones drew up a huge canvas of swirls, each representing $100, and hung it on the wall. Each time she paid that amount off, Jones, who lives in San Diego in the US, coloured one in with a brightly toned hue. The result? She paid off her debt in half the expected time and created an impressive artwork.

“I was surprised by how effective it was, at how satisfying it was to colour those things in,” Jones says. “I could take each one of these swirls and see the progress blooming in colour on my wall, then that motivated me to make different decisions. And so I was more aggressive about paying off the debt than I would have been otherwise.” 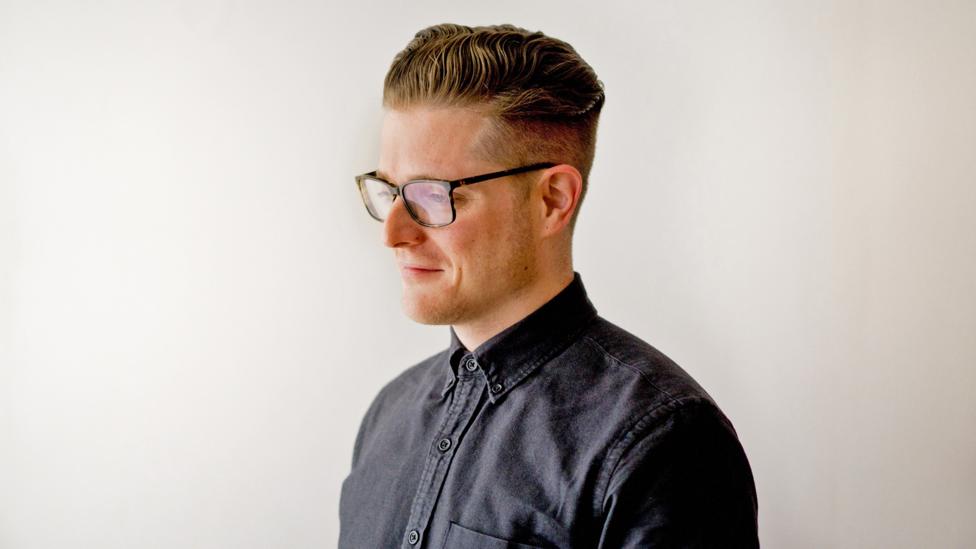 After posting about her success on Facebook, the idea took off. She started selling her designs, known as Progress Maps, online in 2015 with customers in countries as far flung as Australia using them to stay focussed on goals such as clearing debt, losing weight or training for a marathon.

“There's almost a little bit of ceremony to it as well. People get really excited. They look forward to colouring in that swirl. It becomes something more than just swiping your finger on an app, or filling in a cell on a spreadsheet. It's more of an experience.”

Similarly, New York-based digital product designer Ryder Carroll created the Bullet Journal, a method of note taking and list making, out of a personal need. “What you see now is the culmination of a lifetime of me trying to solve my own organisational problems, all of which stem from being diagnosed with ADD when I was very young,” he says. “A big misconception is that we can't pay attention. But in my experience, we can pay attention, except you’re paying the attention to too many things at the same time. So I had to figure out a way to, in short bursts, capture information and also figure out how to be able to listen.”

‘Getting your hands dirty’

Writing it down also sparks innovation. Being innovative and creative is about “getting your hands dirty” a feeling that is lacking when you use technology or gadgets, says Arvind Malhotra, a professor at the University of North Carolina Kenan-Flagler Business School. 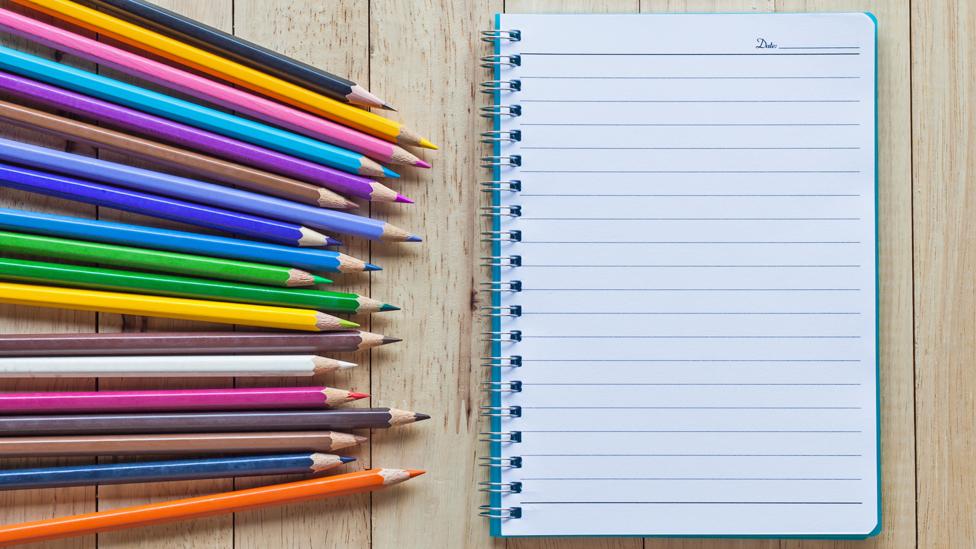 A return to traditional techniques by the digitally savvy has helped boost sales of stationery (Credit: Getty Images)

“Research has also shown that tactile sensory perceptions tend to stimulate parts of brain that are associated with creativity. So, touch, feel and the sensation you get when you build something physical has also got a lot to do with creativity,” he says.

In almost all the high-technology companies, those that make digital hardware and software, whiteboards are still a dominant method for creative stimulation and collaborating

“My own research on fast prototyping reveals that even in the digital age, innovation is sparked when you complement the digital with physical,” Malhotra says. It's the reason many technology firms love whiteboards, he says. 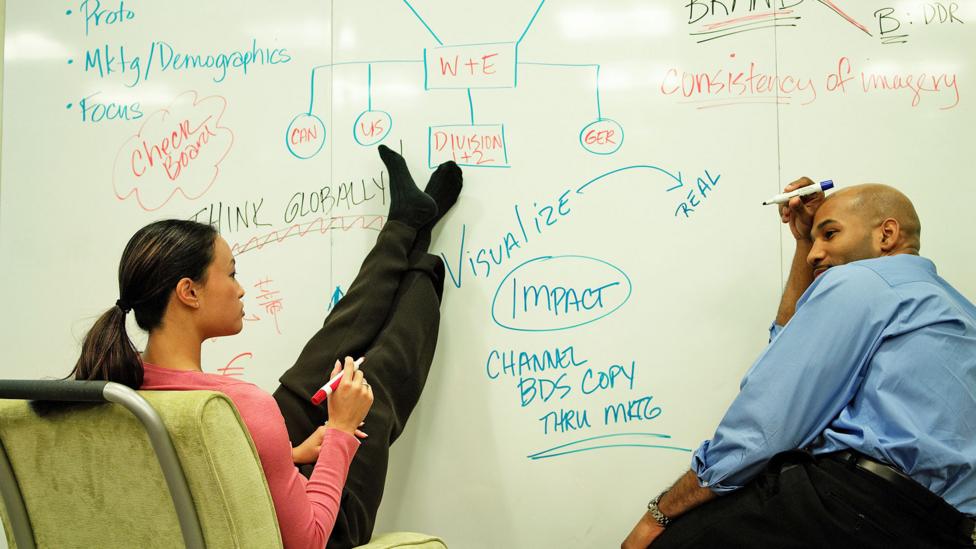 In almost all high-technology companies, whiteboards are still a dominant method for creative stimulation and collaborating (Credit: Getty Images)

“Nearly 80% of the physical workspaces I have observed, that are considerably creative in their output, use whiteboards,” he says. “What is really interesting is that in almost all the high-technology companies, those that make digital hardware and software, whiteboards are still a dominant method for creative stimulation and collaborating.”

For Ceberano, being able to switch off her phone, step away from the computer, sit down and focus is key, along with the flexibility to create her own systems. 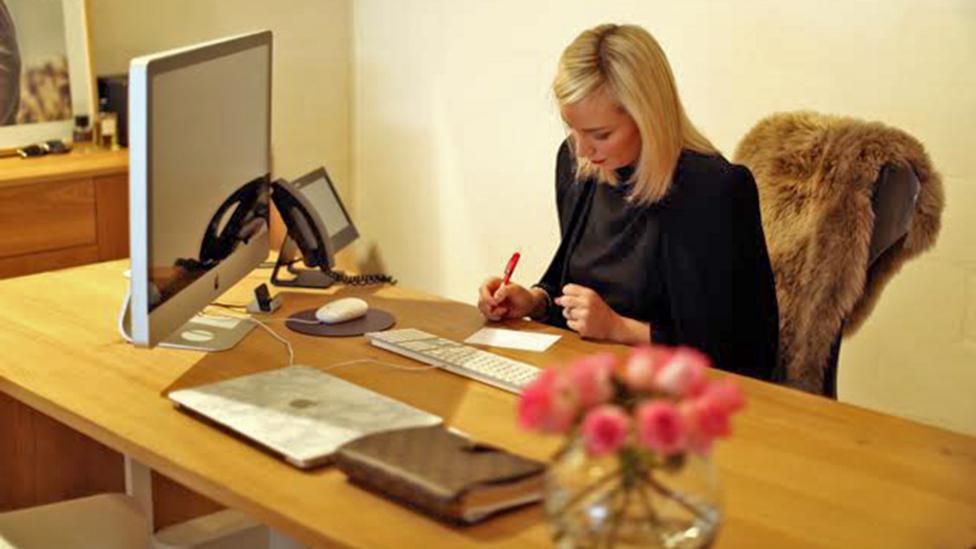 “You can get caught up in this stream of technology and actually it's always on someone else's terms,” she says. “With those apps, the reason I don't use them is because they are someone else's format. It's not they way my mind thinks,” Ceberano says. “So when I'm there with a pen and paper, I'm putting it down in a way that is very organised in my head, but probably wouldn't work for somebody else. … I think people are just trying to take back ownership over the time that they've got and also the way that we're controlling the information that we're taking in.”