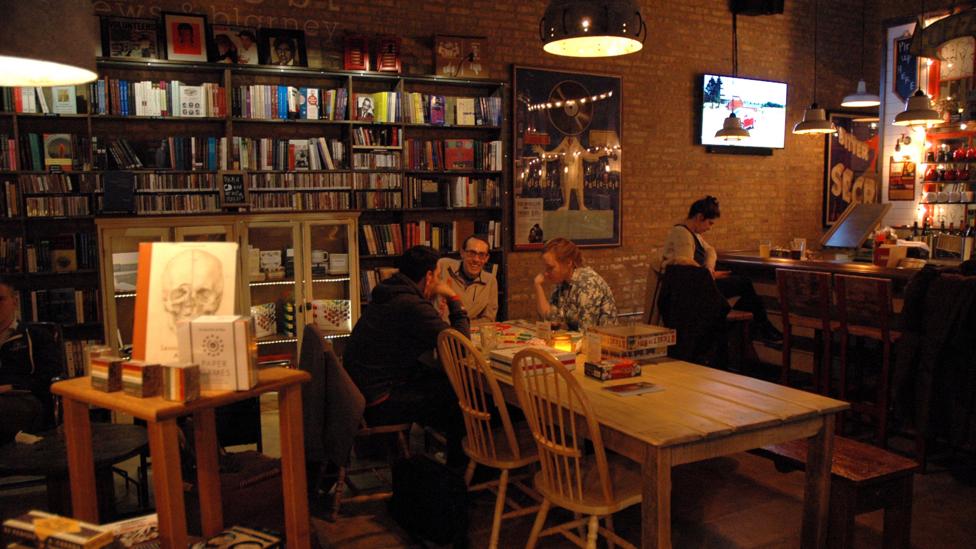 By Elle Metz 27th February 2017
As the gig economy grows, many cafes have become filled with people silently working on laptops. Some owners are trying to buck this trend.
I

It’s Friday night in a new café in Chicago’s Lincoln Park neighbourhood. Packed with quirky signs and an eclectic mix of tables, plush chairs and couches, it resembles countless other coffee shops in US cities. In one corner, there is a display of greeting cards for sale. In another, an American flag hangs from the ceiling.

There’s just one difference: not a phone, tablet or laptop is in sight. Instead, people stand and chat, sipping wine and beer while children sit and play board games. The café, called Kibbitznest, is a wi-fi-free zone. It’s the latest in a string of cafés shunning internet usage in an effort to encourage face-to-face conversation. 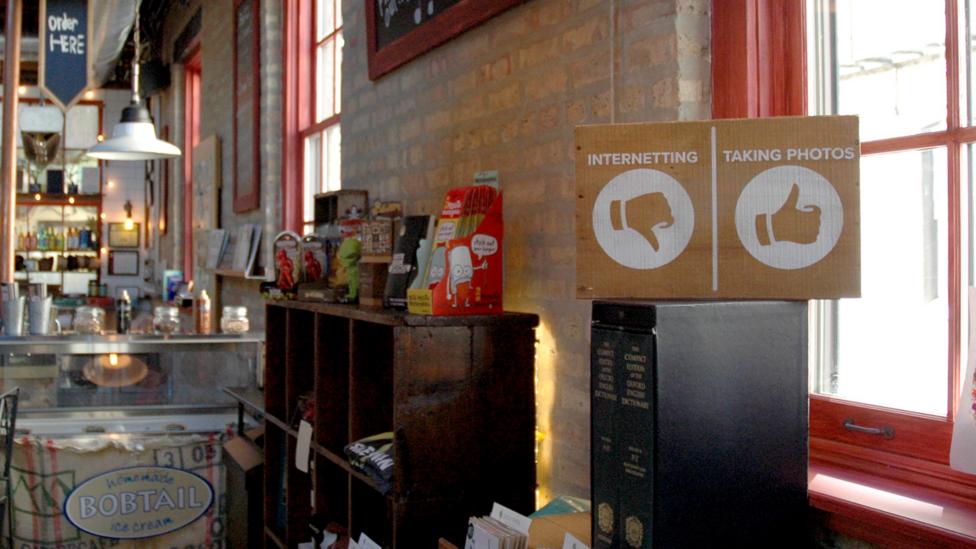 No fi zone – a ban on internet and electronics are part of a backlash against cafes crowded with laptops (Credit: Elle Metz)

It’s a rare sight these days, when many cafés are crammed with people silently working on their laptops. Most major chains like Starbucks and Caffè Nero offer wi-fi, as do most other independent operators. This has made coffee shops an attractive go-to for freelancers or flexible workers who don’t have a home office, or choose not to work from home.

But while the plentiful snacks and fast internet can make for an ideal work environment, rows of workers glued to their laptops can sometimes make cafés feel more like open-plan offices than centres of community.

As a reaction to this trend, Annie Kostiner opened Kibbitznest with her husband Lewis “to raise awareness about the imbalance between the use of electronic technology and face-to-face communication.”

Kostiner says customers are relieved to encounter a space that gives them a break from incessant screen use. They tell her, “‘I am so happy you opened this place.’”

A group of friends plays a board game on a Friday night at Kibbitznest (Credit: Elle Metz)

Similar wi-fi-free cafés have popped up all over the US, in London, Vancouver and beyond. Call it the reaction — or backlash — to the excessive screen time and lack of social interaction now inherent in our daily lives. According to a 2016 Nielsen report, adults in the US spend more than 10 hours consuming media every day.

People are sick of looking at their phones

“People are sick of looking at their phones,” says Joshua Mullenax, a customer who originally came into Kibbitznest wanting to work on his computer. When he learned it was an internet-free zone, he stayed, saying that he loved the idea, even if he found it a bit impractical.

Cafés like Kibbitznest harken back to the original purpose of coffee shops — to act as places for lively debate and intellectual discussion and, above all else, social interaction. Cafés were initially a “third place” after home and work, where people could talk and spend time with friends.

In 1989, Ray Oldenburg coined the phrase “third place” in his book The Great Good Place. In it, he explores the importance of cafés (not to mention pubs, piazzas, beer gardens and teahouses) as gathering places essential to our individual mental health and that of society as a whole. 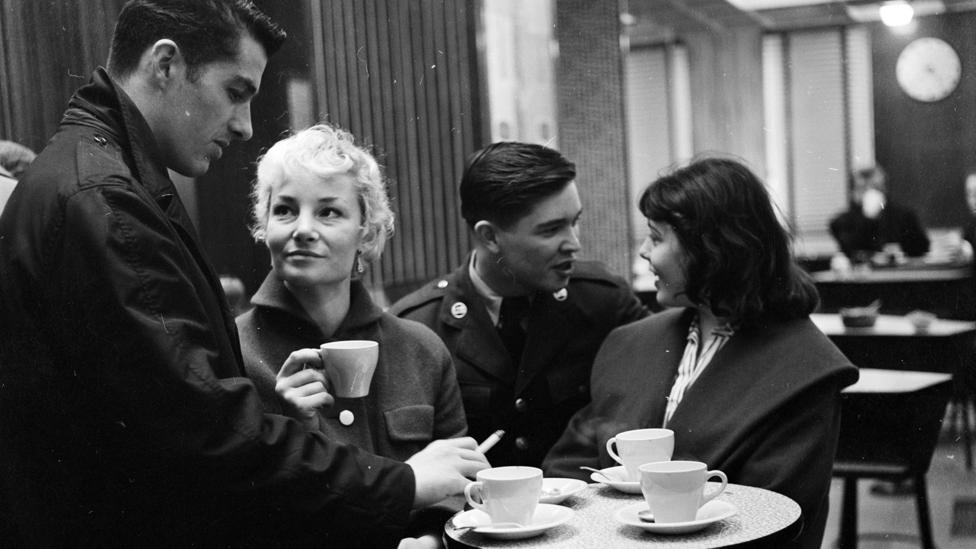 “Deprived of these places,” Oldenburg writes, “people remain lonely within their crowds. The only predictable social consequence of technological advancement is that they will grow ever more apart from one another.”

We didn’t visualise a place where, when you walked in, it would be silent

Jodi Whalen and her husband Phil Merrick witnessed this social separation happening at their café, August First, in Burlington, a city in the northeastern US state of Vermont. People would come in, set up their laptops and remain glued to them for hours.

“When we opened August First, we didn’t visualise a place where, when you walked in, it would be silent,” Whalen says.

So, in 2012, they got rid of their wi-fi. And then in 2014, they banned laptops. While the change was initially stressful, and they received some pushback from customers (mostly through online comments), the reaction was overall positive. Plus, their sales actually increased by 20% — compared to just 6% the year before. 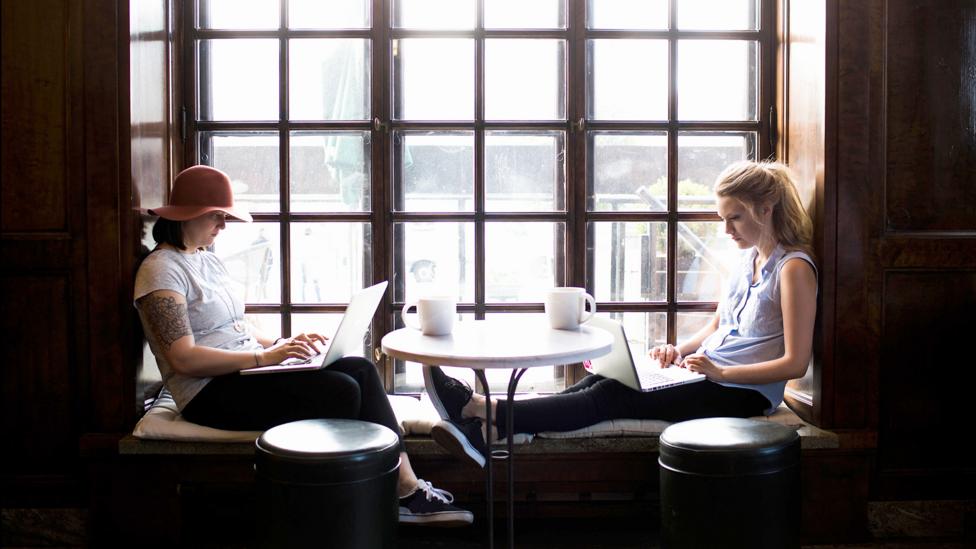 These days, some cafes feel more like offices than places to catch up with friends (Credit: Alamy)

Still, the fact remains that many people want to work, rather than converse, in coffee shops. According to Global Workplace Analytics, the number of people in the US who work from home — or often from a café since home can be distracting — has grown by 103% since 2005, meaning 3.7 million employees now telecommute at least half the time. And these numbers don’t include those who are self-employed — 22% of whom work “from home.”

This trend extends across the globe. According to an Ipsos/Reuters poll, about one in five people around the world works from home. The practice is particularly popular in Latin America, Asia and the Middle East, while not as prevalent in countries like Hungary, Germany, Sweden, France, Italy and Canada.

Jeff Excell thinks cafés should be about having an experience. He co-owns the Fox in the Snow Café in Columbus, Ohio, with his wife Lauren Culley, and they have never offered wi-fi.

When you walk in, it’s almost like a giant family gathering

These days, people can have anything delivered to their homes, Excell points out. Isolation has never been so convenient. Going to a café should be about looking up and interacting with people.

“I wanted to create a shop that was really lively,” he says. “When you walk in, it’s almost like a giant family gathering.”

Excell and Culley consciously hired baristas who would be good conversationalists. They also lowered the counter so customers wouldn’t feel cut off and removed pastry labels and prices to spark questions. Today, Fox in the Snow attracts a cross-section of the Columbus community — from university students to parents, children and government workers. 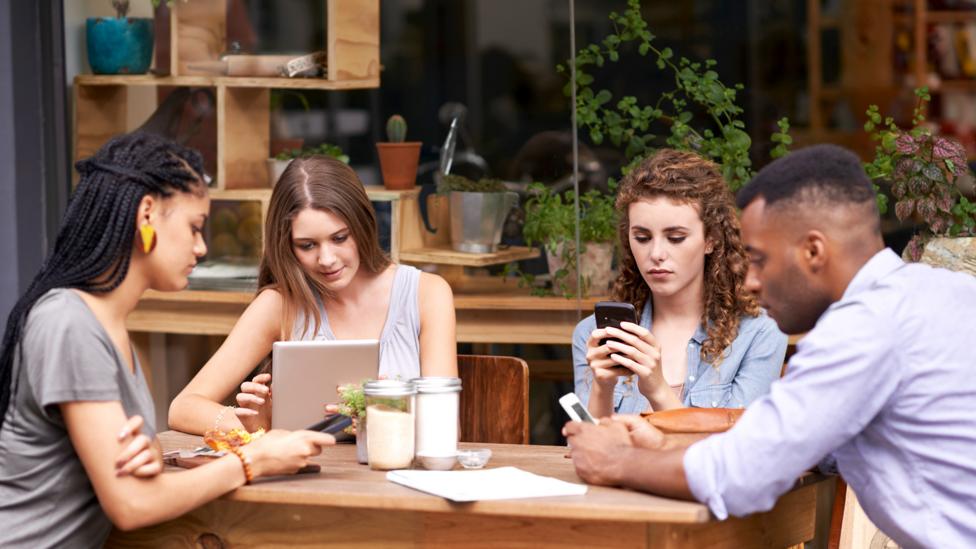 Is it time to stop looking at our devices in cafes? (Credit: Getty Images)

Spots where people can unplug are a public necessity, Excell says. “There’s something sacred about genuine conversation.”

Such “informal public gathering places,” Oldenburg notes, are critical to healthy civilizations. Without them, a sense of community dissolves. As social creatures, we need human interaction, and these wi-fi-free cafés — or third places — offer that.

They sat at that table and played Clue the whole night. That’s priceless

In the coming months Kibbitznest will host a series of discussions by University of Chicago professors. Kostiner is also hoping to start a book club and has started renting out parts of the café for other events, all in the name of tech-free community building. And it seems to be working.

“To me, it’s really that community centre in the city,” says Raj Chopra, who brought his two daughters, Nina and Nikki, to Kibbitznest a few weeks ago. “They sat at that table and played [the board game] Clue the whole night,” he says.