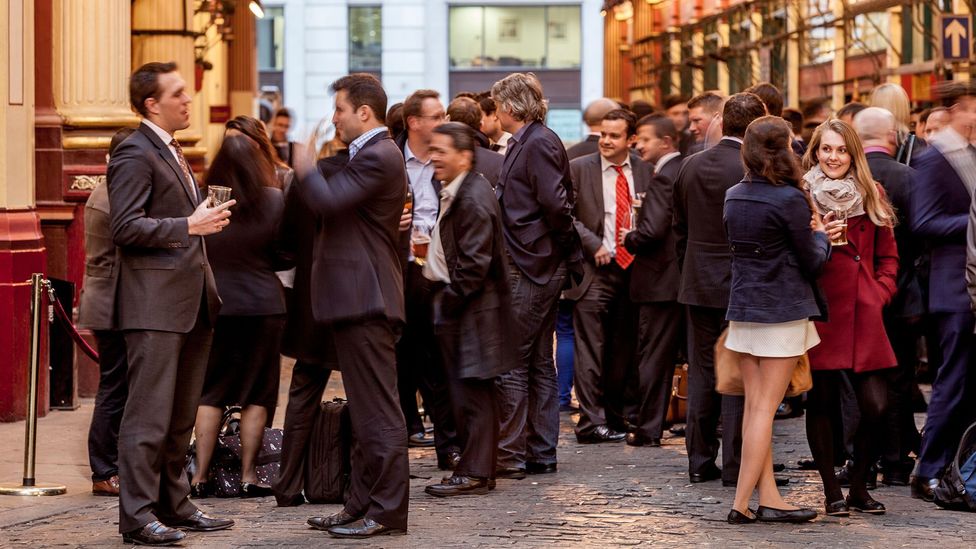 Certain quirks of the British workplace often leave newcomers baffled – from saying ‘please’ to frequent trips to the pub. Here are three tips for navigating office life.
I

If you’re an expat working in the UK for the first time, you’ll have to adapt to more than colleagues who have a penchant for tea and use phrases like ‘bank holiday’ and ‘loo’. From how frequently you might want to use words like ‘please’ and ‘thank you’ to when you should really show up for that 10am meeting, nearly every aspect of British work life will differ from what you’re used to – even if you come from the English-speaking US.

As the saying goes, good manners cost nothing. Adding a ‘please’ or a ‘thank you’ to everyday interactions can make things go a lot more smoothly, but how we use these words – and how they’re received – depend on where we’re from.

Researchers at the University of Sussex and University College London looked at the presence and absence of the word “please” in 1350 requests in British and American corporate emails. They found that Brits used the word more than twice as much as their American counterparts.

This study, due to be published in the Journal of Politeness Research, would seem to back conventional wisdom that Brits are more polite than their ‘brash’ American counterparts – but the answer is not so straightforward.

“What we found is that Americans use please a lot less than the British do, yet they don’t find each other less polite for that,” says Dr Lynne Murphy, a co-author of the study and reader in linguistics at the University of Sussex.

In British working culture, it’s important to use the right words in the right situations, she says. “Set phrases that signal that ‘I’m doing this the right, polite way’ are more important in British culture” than in the US, she says. For example, Brits use the phrase ‘please find attached’ at 10 times the rate of Americans.

But Murphy found Americans are more likely to say please when they feel there’s a power imbalance – for example, between parents and children. It’s likely to make someone feel like you’re begging or feeling superior, she says. Instead, Americans place more value on saying ‘thank you’.

“That goes along with the idea that American politeness culture is very solidarity oriented – it’s about making people feel good about themselves and about each other,” she says.

While Brits were similar in this sense, Murphy says it has been more important historically for Brits to acknowledge the distance and the roles between people though, she notes, this has been changing in the 21st Century.” (Though perhaps not as quickly as we might think.)

So what to do as a newcomer? “Be super, super aware that any time that anyone’s doing something that makes you uncomfortable, there’s a very good chance that’s not their intention.

“A lot of times, it’s little things about how people communicate.”

British politeness doesn’t just cover please and thank you – there is also a complicated dance of small talk and conflict resolution that newcomers have to learn to avoid confusion in the office.

The quirks of politeness can even have a price tag. One 2015 survey of 1,000 managers found that over-politeness could be costing British businesses millions, for example, 20% of those polled felt they had not challenged a fraudulent expense claim.

How do regular workers navigate British politeness? We took to the streets of London to find out. Video by Bold Yellow Media.

Those entering the British workforce from countries with a lax approach to meetings and deadlines may be in for a shock.

The UK is one of the more punctual nations in the world, according to Erin Meyer, INSEAD professor and author of The Culture Map. Showing up late to a meeting is never a good look – we found perceptions of unpunctual people are almost always negative, no matter the good intentions of the latecomer.

People we spoke to on the street had some good advice for newcomers. Video by Bold Yellow Media.

It pays to be punctual

Boozing has long been a part of Britain’s work culture – so much so that investment market Lloyd’s of London made headlines around the world last month when it banned its staff members from daytime drinking.

While daytime drinking is becoming less common for most industries, and while young Brits are drinking less overall than they did a decade ago, if you look in most city pubs during the weekday after 5pm you’re likely to find colleagues wetting their collective whistles.

While beers after work can encourage camaraderie and even help managers and board members get along, there’s a danger in overdoing it – especially for a newcomer not acquainted with the culture of the office.

It can also alienate people who don’t drink, as we found on the streets of London in the video below. Video by Bold Yellow Media.

Should you drink with your colleagues?

This story is a part of BBC Britain – a series focused on exploring this extraordinary island, one story at a time. See every BBC Britain story by heading to the Britain homepage; you can also follow us on Facebook and Twitter.