Loading
Psychology of Work | Workplace
Yes, you should tell everyone about your failures
Share using EmailShare on TwitterShare on FacebookShare on Linkedin 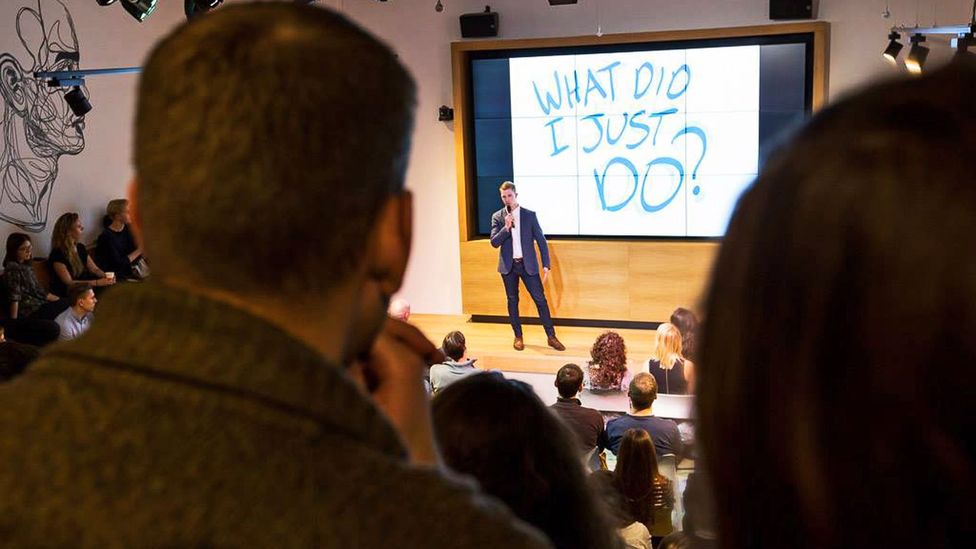 By Alison Birrane 13th March 2017
What’s so great about boldly celebrating our worst blunders? A lot, it turns out. A look inside the movement to bring failure way out in the open.
W

Warning: This article contains strong language that may offend some readers.

After four months and seven interviews, Adriano Destro got the bad news: he didn’t get his dream job at Facebook.

But instead of staying quiet about it, he wrote a LinkedIn post and described the rejection, which came earlier this year, as the best failure of his life.

“We tend to share our achievements and hide our failures,” wrote Destro, a 25-year-old digital analyst and business school graduate based in Napoli, Italy. “Life is not only made of success stories, but most of the time of people failing and getting back on track with more hunger and motivation. I am only 1% done.”

Destro’s post has been viewed about 8.5 million times. He also received more than 100 private notes and messages with positive encouragement and even some job offers, he said via email. “We label failure as a shame, something we should silently carry the weight of… I thought I should make the best out of it.” 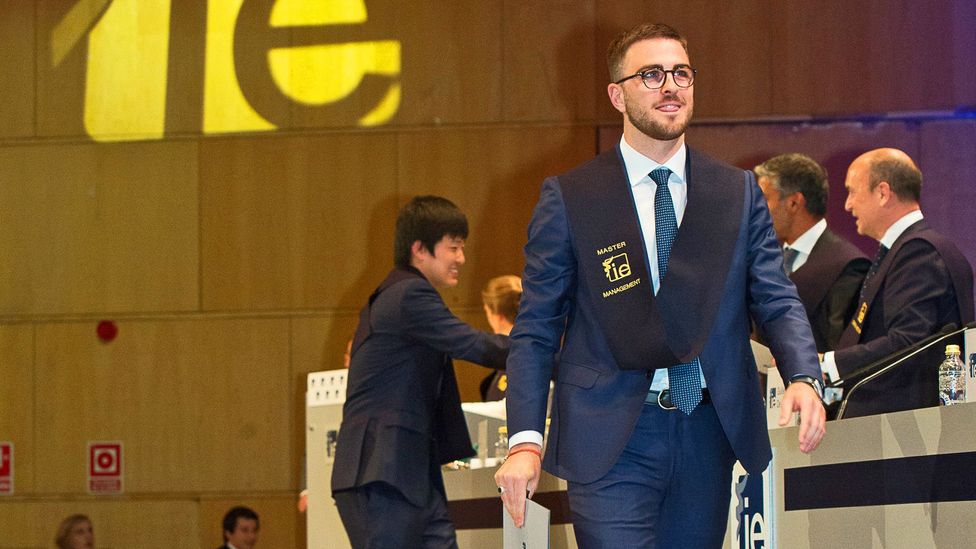 “You know, ‘I got rejected at Facebook’ is a classic MBA narrative,” explains G Richard Shell, a professor of legal studies and business ethics at the Wharton School at the University of Pennsylvania.

“And if the social support for that being OK is present, then it becomes something you can learn from… and it makes you stronger”.

But if it’s not? “Then these failure episodes tend to be alienating, isolating, and depressing... because they think there’s something generic about the failure,” says Shell.

Discussing failure publicly is another matter altogether. Failure can be embarrassing and erode confidence. It evokes feelings of shame and guilt. In some companies, failure can be a career-ending event, experts and executives say. 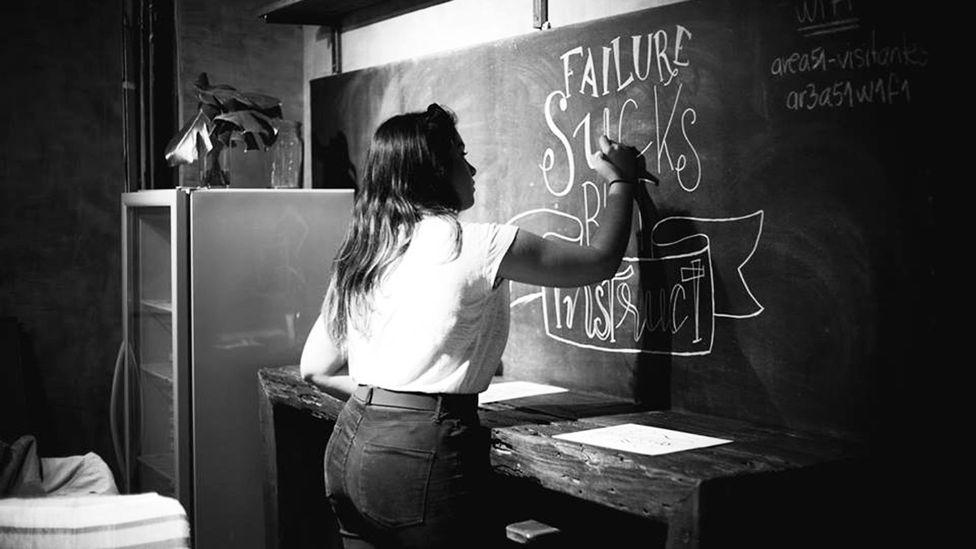 Research shows that humiliation, which is associated with feeling lowered in status in the eyes of others, is one of the most intense emotions that someone can experience, even when compared with feelings of anger or happiness. Failure can also mess with your self-perception and make you feel self-conscious about your abilities at work, regardless of the truth.

Whatever the case, outside of the world of start-ups, falling flat on your face is typically viewed negatively and kept private. But that may be changing: An emboldened group of young professionals are turning the idea of failure upside down.

The movement to publicly celebrate failure might have had its biggest boost in a Mexico City cantina five years ago.

It all started with a frank conversation between five friends. Over rounds of mezcal they discovered they’d only ever discussed success with each other, yet never revealed their failures. That led to an hours-long discussion how being open and uncompromising about failure might actually do you some good. They decided to launch an event that would give people the freedom to discuss their failures, and in line with the no-holds-barred approach of the event they gave it the profane name of “Fuck Up Nights”. 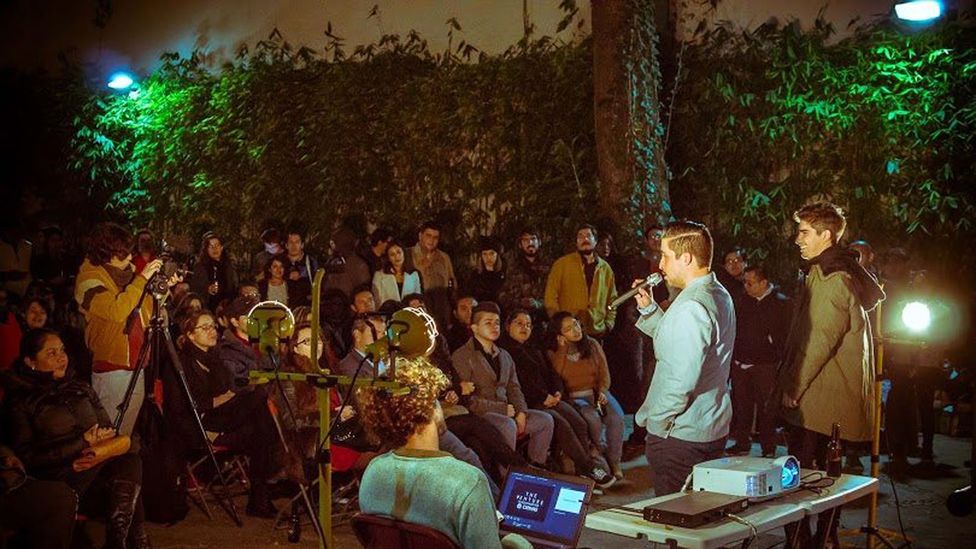 The events, meant to dissect failures, are held all over the world, like this outdoor session in Mexico City (Credit: Farhid Mendoza)

The events follow a specific format: three or four entrepreneurs present their failures for seven minutes using up to 10 images. Each presentation is followed by a question-and-answer session and networking over drinks.

The aim of the events is to take the sting, shame and guilt out of failure, share stories in a supportive environment, workshop the experiences and figure out what could have been done differently.

“It had been one of our most meaningful business conversations ever, and we decided to replicate that experience with more friends,” says co-founder Leticia Gasca, who also heads up the organisation’s research arm, The Failure Institute, a think tank which researches global failure trends.

The series of events, which began as a hobby for the founders, quickly took off globally thanks, in large part, to social media. After two months, 15 cities were hosting the events. Now, the movement has spread to more than 200 cities in 75 countries. Hundreds of people attend — some events in Frankfurt or Mexico City have held more than 1,000 attendees.

An audience prepares to listen to a failure story in Vilnius, Lithuania (Credit: Courtesy Yannick Kwik)

And it’s in countries where people aren’t used to talking about failure, like Japan, Germany or Mexico, where they are enjoying the most success, says Kwik.

There have been tweaks as the movement has expanded. In Muslim countries, for example, and elsewhere, the events are branded using the acronym, FUN, because profanity might put the organisers on the wrong side of the law, to say nothing of social and cultural mores.

Reframing failure as lessons to be learned can make people stronger

Despite cultural differences, he says, there is a need from society for a place where failure can be shared in a free and open way, without the fear of social and family rejection.

“There’s a lot of knowledge there that no-one’s sharing and there are a lot of experiences there that help others in the same situation,” he says. “They could be a source of inspiration.”

Start up, shut down

The start-up world has seen its share of celebrating failure publicly, but it’s been slower to catch on elsewhere.

Launched in San Francisco in 2009, Failcon was pegged as one-day conference for start-up founders to learn from and prepare for failure, but has since been reformatted because the topic is now so much a part of industry lexicon, founder Cass Phillipps told the New York Times. Start-up funerals are a thing now, too. And start-up failure post mortems are becoming ubiquitous.

The failure story ends with some sort of resiliency

And while the US might be perceived as a place where failure is celebrated, outside of the start-up microcosms of Silicon Valley in California, and Boulder, Colorado, where ‘fail fast, fail often’ and, more recently, ‘fail gracefully’ have become mantras, failure is viewed more conservatively.

“In the rest of the States, people struggle the same way as in other countries,” says Kwik.

No matter the country, reframing failure as lessons to be learned can make people stronger and more resilient, proponents say.

“The failure story ends with some sort of resiliency. It may not be redemption, but it may be ‘I’ve picked myself up, I’m still going, this is what I learned and here is why it’s really important why people fail because without failure you can’t learn’,” says Wharton’s Shell. “We’re owning that process and celebrating it and sharing it.”

worklife
1The hidden psychology of failure
worklife
2Is fear of failure holding you back?
worklife
3‘I just had to work harder’
Around the BBC