In some industries, drinking is simply standard practice for success. But that may be changing, writes Tim Smedley.

It’s lunchtime on a sunny Tuesday in Leadenhall Market, a bastion for office drinkers in the City, London’s financial district. Sure enough, there is already a smattering of drinkers in suits clutching pints under the shadow of the iconic Lloyds of London headquarters building.

According to recent news reports, these lunchtime boozers are supposed to be a dying breed. In February, insurance giant Lloyds banned some of its employees from drinking during office hours. Some proclaimed the ban marked the end of Britain’s drink-fuelled business culture, yet the lunchtime scene suggested otherwise. And as several people admitted, there is still pressure to drink in many industries.

What are the booze habits of these white-collar workers? I ask a group of Leadenhall drinkers, who work in the property industry and are visiting the City for a meeting. They decline to give their names – as do many I speak to for this article. Drinking is part of the job, but in an era of health and well-being policies, they do not want to admit it publicly. The Lloyds ban “only affects the nine-to-five, admin types,” says one man. “Insurance brokers are drinking as much as ever – that’s how the deals get done”. 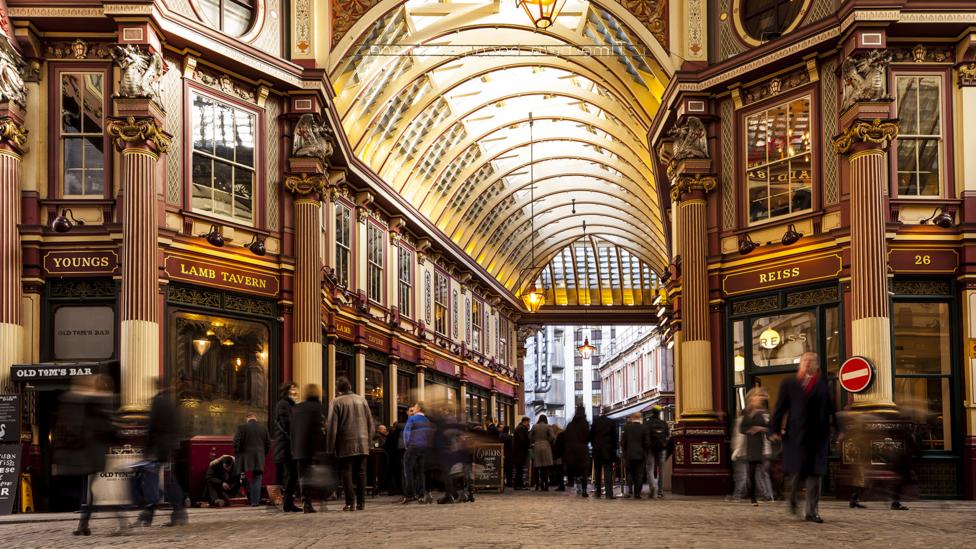 London’s Leadenhall Market has long been a stronghold for those who prefer to network over drinks (Credit: Getty Images)

The UK Government estimated in 2012 that alcohol-related illness accounted for 7-11% of all workplace sickness absence. According to the Office for National Statistics, one in five higher earners (earning more than £40,000, or $50,200) drink alcohol at least five days a week, compared to only one in 12 low earners (earning less than £10,000).

Anne Payne, co-founder of Validium, an employee well-being provider, says the pressure to drink is a common anxiety, “particularly in some industries… the medical profession, insurance, finance, stockbrokers and traders… you still hear people even now saying ‘if you want to get on in this business, this is what you need to do’,” Payne says. “It is hugely pressurising for people.”

Hannah (who declined to give her name out of concern it would affect her current job), a former financial analyst, quit her job last year because drinking was affecting her health, she says.

“We had to compile reports, often up against very short deadlines – at the end of the day someone would say ‘let’s go for one [drink]’ and we would always laugh, because it would never just be one,” Hannah says. “We would go out on a Monday, Tuesday, any day really.”

Saying ‘no’ wasn’t an option, she says – not with people standing by her desk egging her on to come along. “You couldn’t say no… I felt like I had to keep the team happy. I was in my mid-30s, but drinking more than I ever had in my 20s.” Now, away from that culture, she rarely drinks. 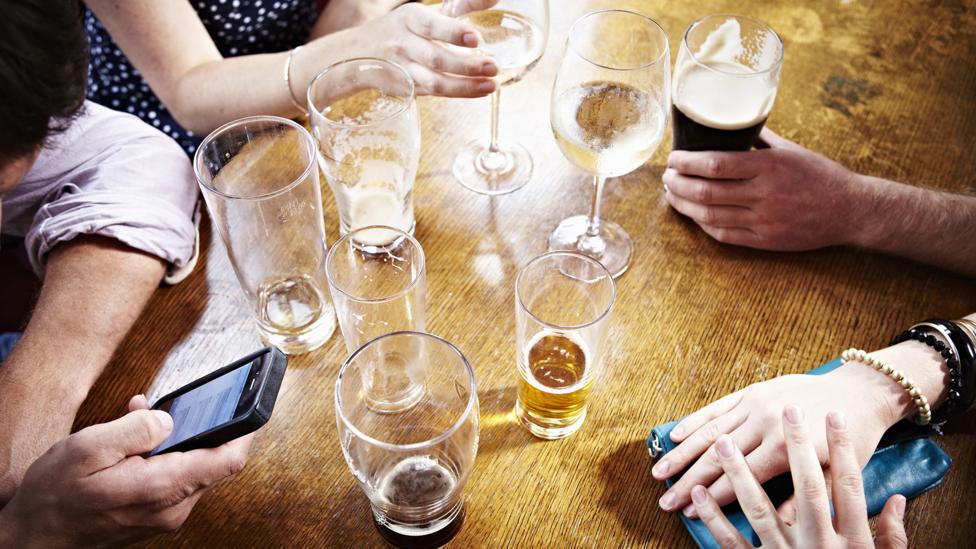 If a beer is the ticket to a successful career, it can be hard to say ‘no’ (Credit: Getty Images)

Legal eagles at the bar

The legal sector is another that still maintains a boozy culture, says Payne. “It really is terribly difficult to progress, there is huge competition, and people are going to do everything and anything to progress and make partner,” she says. “That often includes drinking.”

It’s a description that Patrick (not his real name), a London lawyer in his late 30s, recognises. “All the firms I have worked for have had a booze culture”, he tells me, on the condition of anonymity. A significant part of his job is ‘business development’, known as ‘BD’.

The consumption of alcohol is an unspoken necessity, if you want to progress

“BD is all about maintaining relationships with existing clients, and trying to win new clients. BD involves booze as a social lubricant, it makes people more willing to loosen up and bond,” he explains. “If you don't do BD successfully, chances are you won't ever become a partner. So the consumption of alcohol is an unspoken necessity, if you want to progress.”

Since much work and networking is done at the bar, career progression is harder for those who don’t drink for religious reasons, he says.

Laura Morrison, who worked in the IT industry in the early 2000s, says drinking was expected for career advancement. “Earlier in my career, one of the personal assistants took me aside, noticed I didn’t drink much at work functions, and said ‘look, this is expected, you need to join in,’” Morrison recalls. 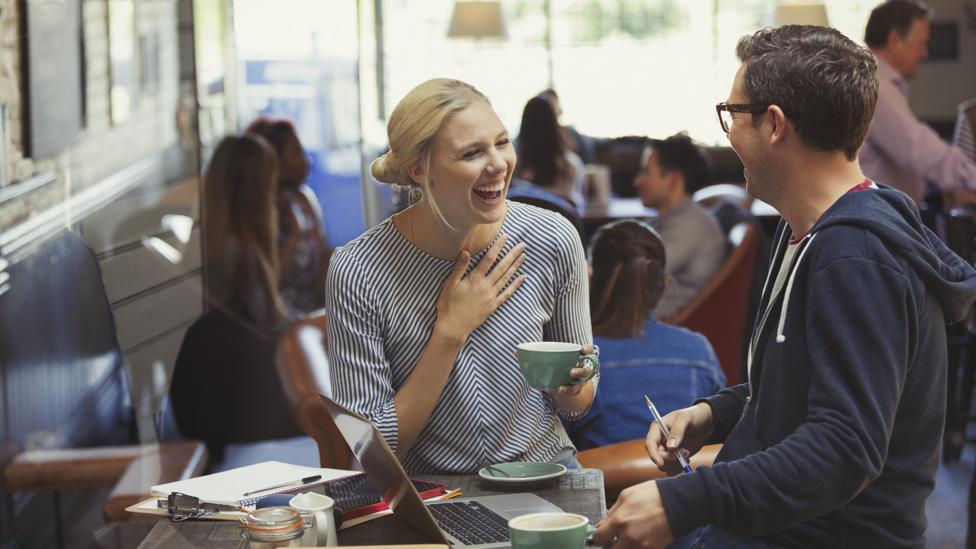 As millennials make up a larger portion of the workforce, could they change workplace drinking culture? (Credit: Getty Images)

The company culture in the firm where she used to work has since changed, she believes, in part thanks to the influence of the younger generation now entering the workforce.

“Younger people now are much more career-focused, they don’t have lots of money to spend in bars”, says Morrison. Most, she says, have large loans to pay off following university degrees. The cost of living is higher, while salaries haven’t always kept pace for younger people.

“The younger people I meet see drinking as a drain on their productivity and their time,” she says.

The Office for National Statistics’ figures back this up: less than half (48%) of those aged 16 to 24 report drinking alcohol in the previous week, compared with 66% of those aged 45 to 64.

In Manchester’s young start-up scene, Josh Turner, the 26-year-old founder of ethical socks company Stand4 Socks, with seven employees, says, “soft drinks are on the rise… and I don’t see that as a bad thing.  It’s the social element that is important… if it’s beers, lemonade or tap water, it doesn’t matter.” His team often do have beers on a Friday, but also bond over healthier fare, such as coconut water.

If the younger generation really are less obsessed with drinking than their predecessors – and millennials, born between 1980 and 1999, are predicted to make up 75% of the global workforce by 2025 – then drinking cultures may yet become a lesser part of working life.

A spokesperson for Lloyds of London says it is too early to tell what impact its drinking ban has had internally. While "one or two people" were unhappy at the rule change, "for the vast majority of people here it didn’t actually impact that much on them, because that’s the way they were already working,” the spokesperson says, adding that younger people entering the workforce expect these sorts of policies.

But while boozy lunches, paid for on expenses, are becoming less frequent, that doesn’t mean the work-related drinking culture has disappeared. It’s just shifted. At the end of a long working day, says Payne, “in some professions, in some teams, there is an expectation that you appear in the pub.”