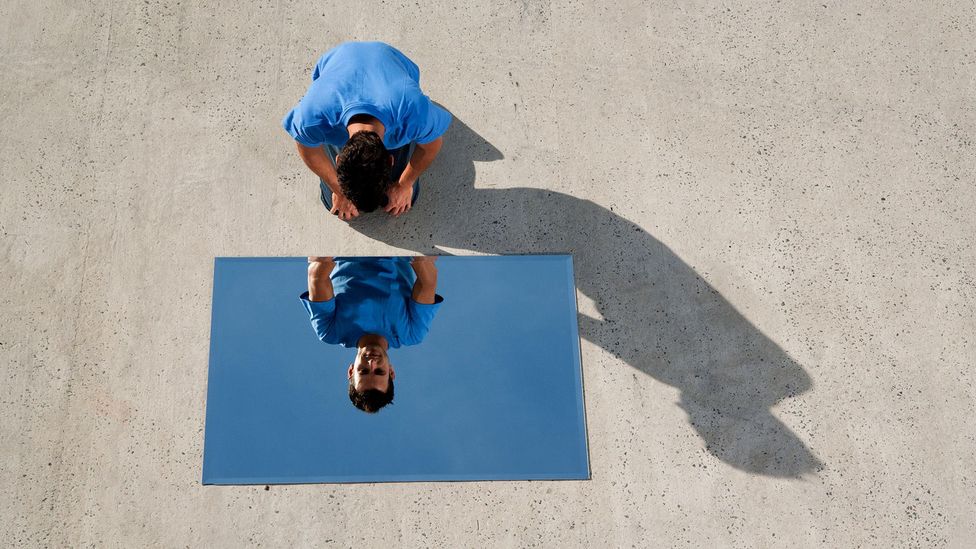 By Bryan Borzykowski 28th April 2017
A London dentist stopped looking in other people’s mouths and started opening his own. The results may be something for everyone to chew on.
E

Eugene Gamble spent most of his career as a dentist in London, quietly and diligently working on people’s teeth. Then, three years ago, he decided to give up his life’s work to become an entrepreneur.

There was just one problem: he was no good at business. As his ideas failed, his confidence plunged.

He could have gone back into dentistry but he was determined to succeed in the business world. So, he hired a business coach who gave him an odd piece of advice. “He told me speak out loud,” says Gamble, who helps wealthy people invest in residential real estate.

That’s right. He was instructed to talk to himself.

“It was weird, because it was something new to me,” he says. “I didn’t believe that it could work, but once I tried it – it made perfect sense.”

Talking to ourselves may seem strange because we tend to associate speaking out loud to nobody in particular as a sign of mental illness. However, there’s a growing body of research to indicate that self-talk can help memory recall, confidence, focus and more. 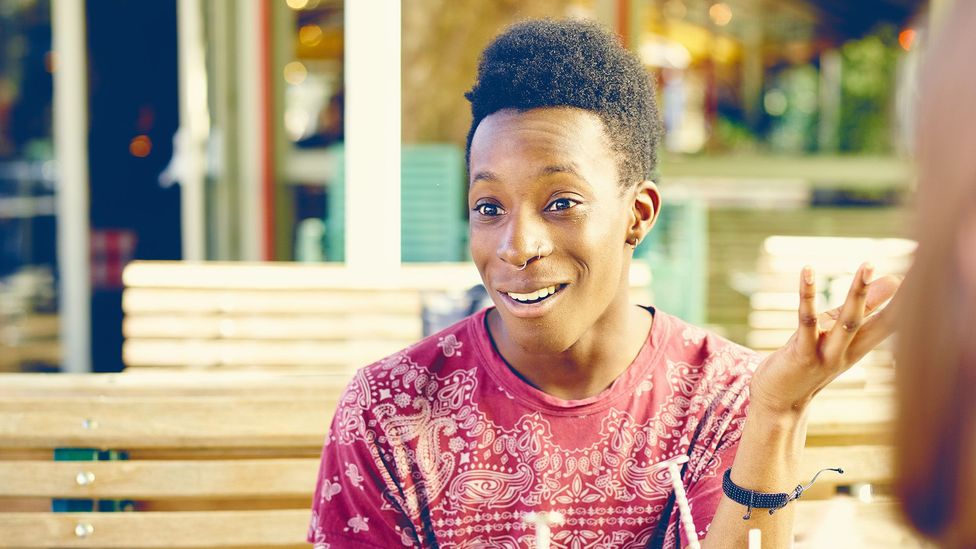 Talking to yourself: a sure-fire way to become the most interesting person in the conversation (Credit: Getty Images)

“It’s not an irrational thing to do,” says Gary Lupyan, an associate professor of psychology at the University of Wisconsin, who has studied how hearing ourselves speak can impact our memories. “You don’t know everything you’re going to say – you can even surprise yourself.”

His work, which is one of the most cited studies in this field, had people look at objects on a computer screen. Some had to say the name of the item out loud, while others were instructed to remain silent and keep the word in their head. The result? The ones who said the word out loud were able to locate the objects on the screen more quickly.

A similar experiment had people say the names of common grocery store items out loud. They then had to find those items by looking at photographs. The ones who said the words found the foods faster.

Saying a name out loud is a powerful retrieval cue

While we all know what a banana looks like, saying the word aloud helps the brain activate additional information on that item, including what it looks like, he says. We will, of course, find the banana at the store regardless, but we’ll find it faster if we speak the name.

“Saying a name out loud is a powerful retrieval cue,” says Lupyan. “Think of it as a pointer to a chunk of information in your mind. Hearing the name exaggerates what might normally happen if you just bring something to mind. Language boosts that process.”

Kids talk to themselves all the time – perhaps they’re onto something (Credit: Getty Images)

Anne Wilson Schaef, a former psychologist and now author and speaker, often encouraged her clients to speak to themselves. Not only did it improve her clients’ memories, but it also changed the way many of them felt. For instance, if a patient was angry, she’d tell them to say out loud what they were upset about. The anger would then disappear.

She believes it has something to do with who is listening to the words. “All of us need to talk to someone who’s interesting, intelligent, knows us well and is on our side and that’s us,” she says. “We’re probably the most interesting person we know. Knowing ourselves and how we feel can help us improve.”

We have to say the right words for this to work

Studies suggest that Schaef is onto something. In 2014, the University of Michigan’s Ethan Kross released a paper saying that self-talk can make us feel better about ourselves and instil a confidence that can help us get through tough challenges. However, we have to say the right words for this to work.

Kross, along with several colleagues, conducted a series of experiments that had people describe emotional experiences using their own names or words like “you,” “he” and “she.” He found that talking in the third or second person, helped people control their feelings and thoughts better than those who spoke in the first person.

In another study, Kross, who outlined his research in the Harvard Business Review, asked people to refer silently to themselves in the second or third person while preparing for a speech and found they were calmer, more confident and performed better on tasks than those who used only first-person words. The results were so profound, wrote Kross, that he now gets his young daughter to speak to herself in the third person when she is distressed.

Talking to ourselves has many other benefits. “Our findings are just a small part of a much larger, ongoing stream of research on self-talk, which is proving to have far-reaching implications. “Not only does non-first-person self-talk help people perform better under stress and help them get control of their emotions, it also helps them reason more wisely.” 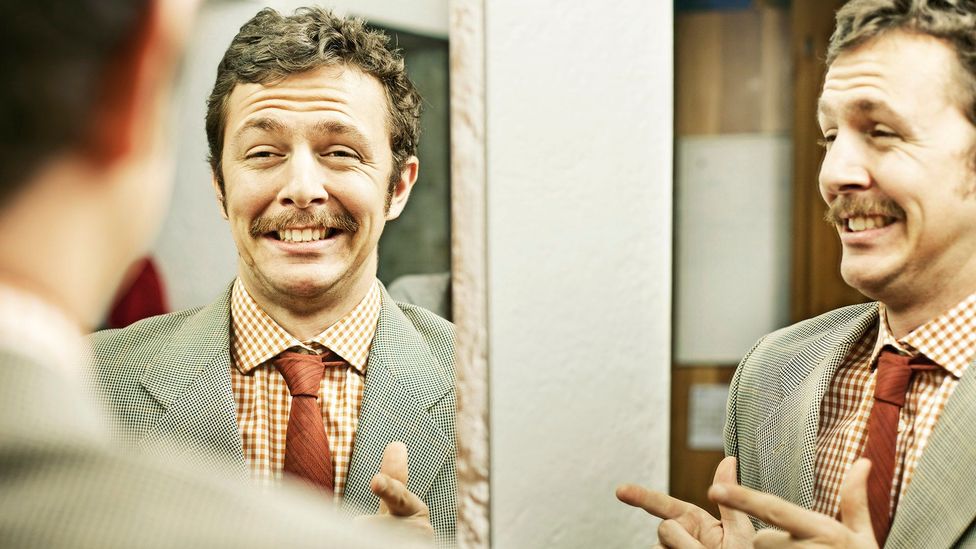 Referring to yourself in the third person can sound especially pompous, but Kross says it can make you perform better (Credit: Getty Images)

While Gamble is not yet talking to himself in the third person – he finds it too strange – his coach has told him to repeat self-affirming comments out loud, such as “don’t do your best, do whatever it takes.” He has taken that advice to heart and says it works.

Self-talk has also helped him nail presentations. Before he meets with a wealthy investor he goes over his presentation out loud. Gamble first writes it down and then reads it out over and over again, fixing words he stumbles upon. By hearing himself speak, his can better organise his thoughts, he says. He also remembers the presentation better. “It’s muscle memory,” he says. “It’s like how I was taught to play the piano. I’d keep playing the entire piece until I could fix the weakness.”

Talking to ourselves out loud is sometimes frowned upon – and we may not want to chat constantly with ourselves in public – which is why most of us do not do it. Children do, however, and there is a lot of research that shows that self-talk among kids is an important part of their development. A 2008 study, for instance, found that five-year-olds who talk to themselves out loud do better at motor tasks than when they’re quiet.

Gamble believes he now has more confidence than ever. While there are other things that have contributed to his successful transformation from dentist to real-estate entrepreneur, talking out loud has certainly played a part.

“Sometimes I have to take a step back and say is this really happening? Is it really this effective?” he says. “I can tell you that I’m in a much better position now than I was in three years ago. Talking aloud has produced results.”