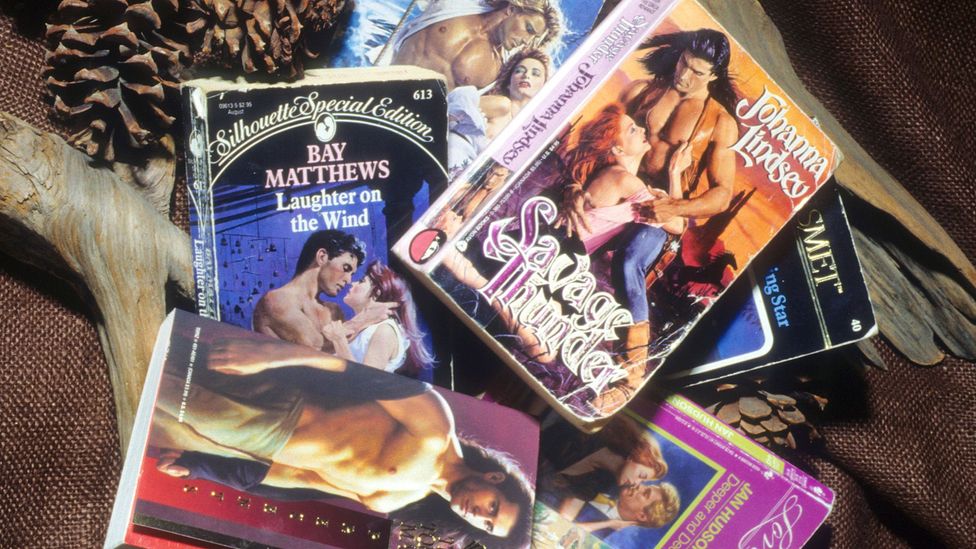 With the median income for romance authors tripling in the e-book era, other gig workers could stand to take a page from these novelists' books.
W

A less racy but equally thrilling story, my research shows, is how romance writers are getting ahead in the digital era.

While economists and labor scholars wring their hands over the rise of the precarious gig economy, these freelancers have developed innovative business practices over the past four decades that have set them up for success in the digital era.

Although few have reached the flabbergasting success of “Fifty Shades” author EL James, a former fan fiction writer whose net worth now totals more than $58 million, I found that the median income for romance authors has tripled in the e-book era. And more and more are earning a six-figure income. 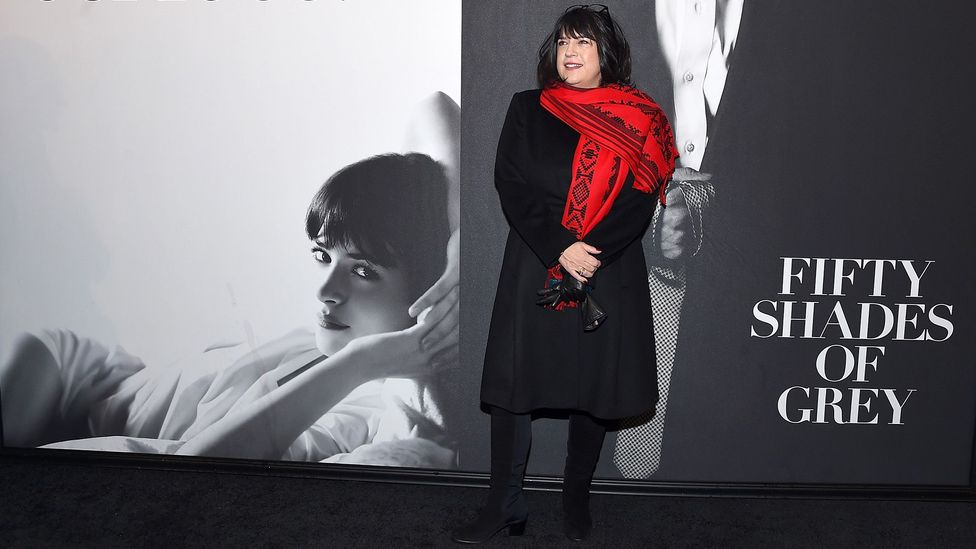 Almost no romance writer will make tens of millions like E.L. James – but the people penning bodice-rippers are making more money than they used to (Credit: Getty Images)

This uptick occurred as other types of writing became less profitable. During the same period, a survey of 1,095 Authors Guild members found that their median income from writing fell by at least 30%.

Clearly, romance writers know something that other authors, and many struggling freelancers, don’t. The one-third of American workers toiling in the gig economy can learn a few lessons from them.

Some 57.3 million US workers freelanced in 2016, according to research firm Edelman Intelligence. Economists Lawrence Katz and Alan Krueger found that 15.8% of Americans work in “alternative work arrangements” (freelancing, contracting, temp work, etc.), up from 9.1% in 1995. In fact, they found that all net job growth in the US from 2005 to 2015 came from such work.

If you’re not already freelancing, you may be soon. Edelman predicts that given current growth rates, more than half of the American workforce will freelance by 2027.

Experts don’t agree whether this trend is good or bad for workers and the economy. The freedom is nice but freelancing often pays poorly. 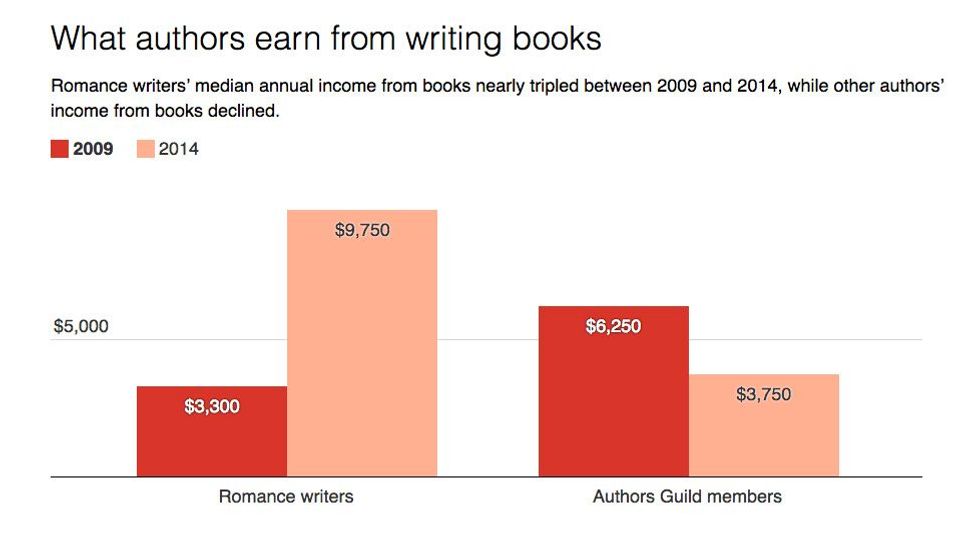 It hasn't always been the case, but more and more romance writers are making enough to support themselves in recent years (Credit: The Conversation, CC-BY-ND)

While few writers are getting rich off books alone – I found that half of romance writers earned less than $10,000 in 2014 – more and more are able to support themselves. While only 6% earned at least $100,000 in 2008, more than 15% did in 2014. Most gig workers, including authors, patch together a living through multiple occupations.

Three practices set romance writers up for success: they welcome newcomers, they share competitive information and they ask advice from newbies

You might speculate that romance writers’ succeed because smut sells. But that doesn’t explain why romance writers are faring better than their peers with digital sales.

Instead, three surprising practices set romance writers up for success: they welcome newcomers, they share competitive information and they ask advice from newbies.

Faced with rejection and ridicule from other writing groups in the 1970s, romance writers formed their own professional association, Romance Writers of America. It now has some 10,000 members.

From its start in 1980, the group embraced newcomers. Unlike other major author groups – and most professional associations – this one welcomes anyone seriously pursuing a career in the field. Newcomers may join once they’ve completed an unpublished romance manuscript.

Similar groups, including the Authors Guild, Mystery Writers of America and Science Fiction and Fantasy Writers of America, limit full membership to published authors. In some cases, these groups only accept members whose work has been published by specific companies or who have earned a specified amount of money in royalties.

Unlike Romance Writers of America, most traditional guilds, unions and trade associations only admit established professionals. 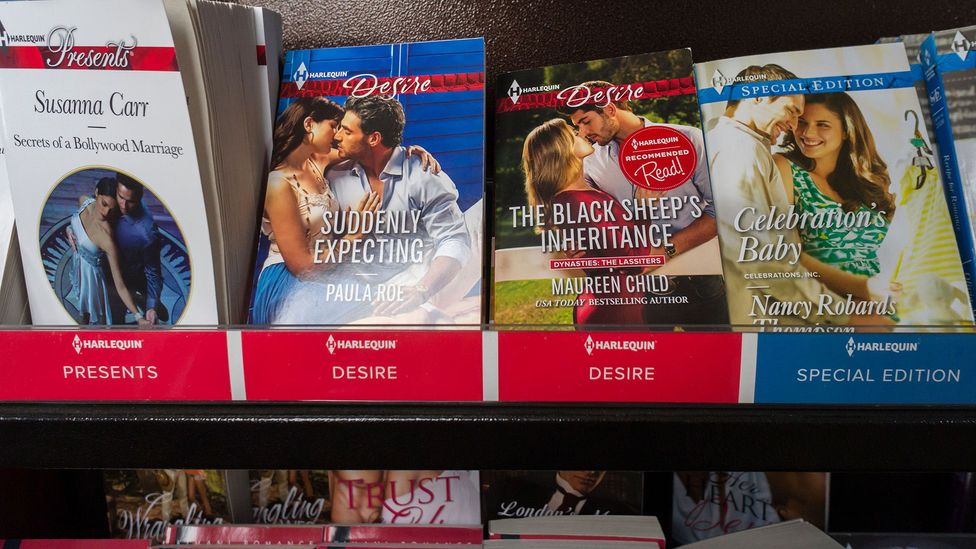 These barriers to entry can stultify and stagnate industries, especially with today’s transitions. Network theorists Walter Powell and Jason Owen-Smith, for instance, found that the most successful biotech companies in the 1990s formed strategic alliances with newcomers.

Political science professor John Padgett of the University of Chicago found that upper-crust families in Renaissance Florence who allied themselves with new, upstart families prospered, while members of the elite who shunned newcomers lost influence over time.

These networks proved valuable when new digital self-publishing avenues opened up 10 years ago.

Numerous self-published romance writers, including blockbuster author Bella Andre, known for her Sullivan family books, shared their mistakes and successes with other writers as they tried new digital methods of publishing and promotion. Marie Force, best-selling author of the Gansett Island series, started an online self-publishing advice group. Some authors, like Brenna Aubrey, whose romantic stories are about geek culture, even declare their earnings.

This radical transparency that propelled many romance writers to digital success can work in other fields.

For instance, openly sharing local rates and best practices could prove valuable to workers who find jobs through sites like Upwork and TaskRabbit, many of whom set their own prices. 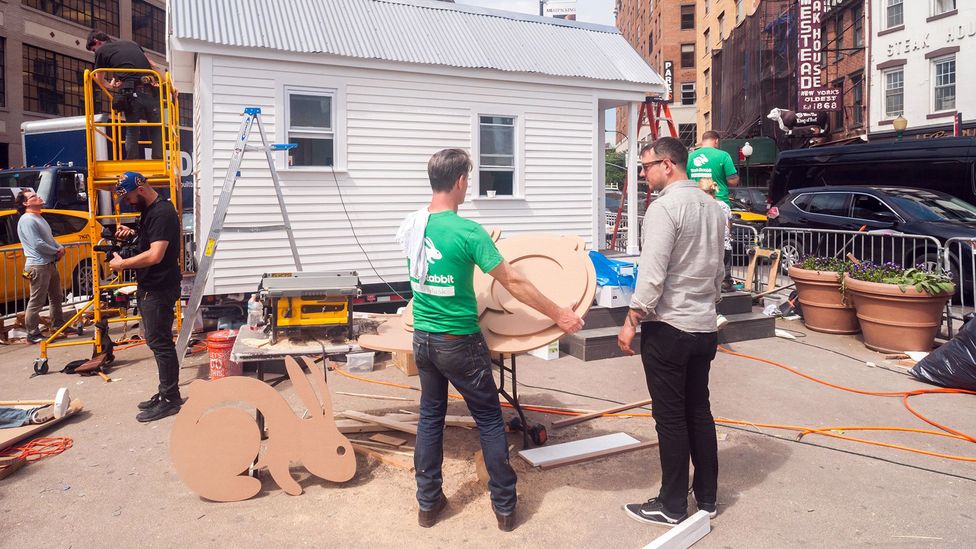 Could the collaborative spirit of romance writers help other types of gig workers who set their own rates? (Credit: Alamy)

Getting advice from newbies

The openness of romance writers has yielded an unexpected side benefit: access to innovators. The most successful romance writers I studied were experienced authors who asked newcomers for advice.

Using social network analysis tools, my colleague Elspeth Ready and I looked at advice patterns among 4,200 romance writers I surveyed.

While you might presume that novice writers would seek advice more often than anyone else, this wasn’t the case. While 72% of unpublished authors in my survey sought advice in the past year, a subset of established writers asked advice just as often. These were established authors interested in shifting to self-publishing.

Many of them did, successfully. I found that, by 2014, traditionally published authors who had added self-publishing to their portfolio out-earned all other romance writers: These so-called “hybrid” authors had a median income of $87,000.

Of course, most writers weren’t earning nearly that much: Half earned less than $10,000 a year. And my survey relied on self-reported income, which can be imprecise. Still, as a whole, these writers saw their prospects improve as the digital gig economy grew and other authors were earning less than before.

At a time when work is becoming increasingly solitary, it only seems fitting that a model involving mutual care and support comes from the freelancers who earn a living from imagining successful connections.

Chris Larson is an assistant professor of journalism at University of Colorado. This article originally appeared on The Conversation, and is republished under a Creative Commons licence.