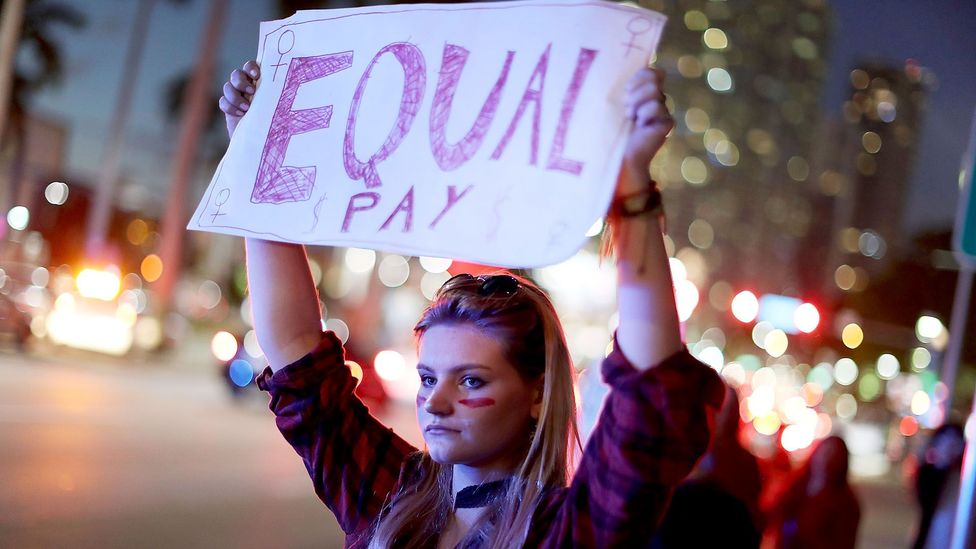 ‘Iceland has made it illegal to pay women less than men!’ crowed headlines in January, to a huge collective cheer and social media high-fives.

But the reality is, in most countries it’s already illegal to pay women less than men. From the Russian Federation to Rwanda, it’s against the law. Most nations (and not just in the workers’ paradise of Scandinavia) have had some form of existing anti-discrimination laws in place for decades.

The results show we’re going backwards on gender parity across health, education, politics and the workplace for the first time since 2006. According to WEF calculations, an average gap of 32% (up from 31.7%) still remains and the reversal is being driven in part by declining gender equality in the workplace. And like many other high-profile employers, the BBC is very much part of this debate.

The latest radical step from Iceland is that the country is trying to flip the legal situation on its head. What makes the Iceland plan different is that the onus will no longer be on a beleaguered employee to prove they are underpaid – which can involve years of court battle. It’s up to their boss to prove they are paying workers fairly.

But is this really so radical? Could this model be scaled up to a much larger island nation? 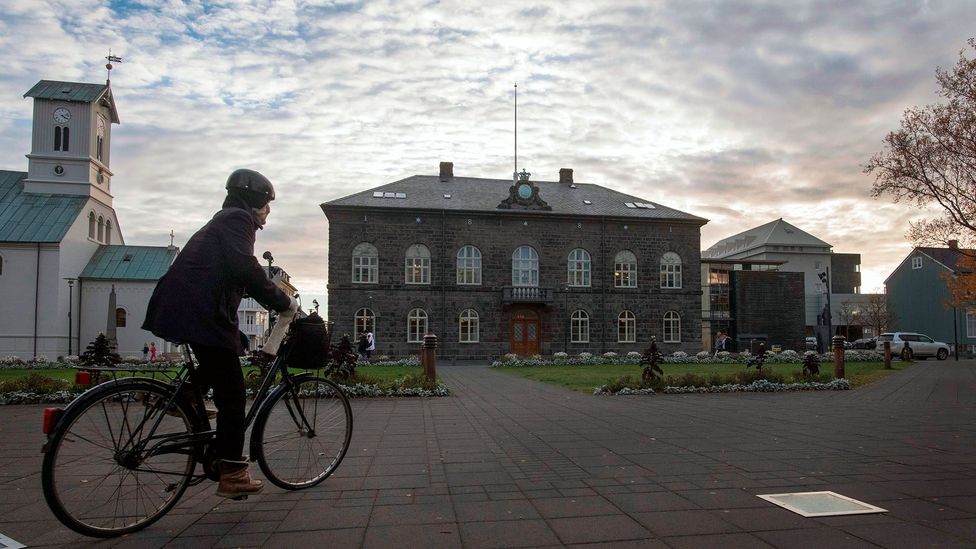 By many measures, Iceland leads the world in gender equality (Credit: Getty Images)

“Most countries have equal pay laws: the UK established them in 1970,” says Daphne Romney QC, one of the UK’s leading barristers in equal pay litigation. Over and above that, she says, is the European Union right to equal pay, which gives workers the right to go to civil court or a tribunal.

Iceland has made it a criminal offence for employers not to take action on unequal pay. They’ve effectively made it like a health and safety violation – Daphne Romney QC

Although most countries allow workers to take action against employers, the problem is that “it takes years of slog to get it to court, let alone get to the point of compensation.”

“Iceland has made it a criminal offence for employers not to take action on unequal pay. They’ve effectively made it like a health and safety violation,” says Romney, adding there will be a penalty for inaction which will trigger job evaluation schemes.

So why can’t this model be made to work elsewhere?

“I think it’s very radical but to be honest I don’t think it would get through [passed in to law] here in the UK. Nothing works. The new UK gender pay gap regulations will only apply to 34% of employees, i.e. firms of more than 250 employees,” Romney says.

Romney is talking about a 2016 UK law requiring all larger firms – around 9,000 companies – to report their pay data. The idea is to get large firms’ pay data out in the open and subject to public scrutiny.

But Romney feels this is as far as it goes: she feels Prime Minister Theresa May’s Conservative party is opposed to any changes that go further, as they could bring significant costs for the business sector. 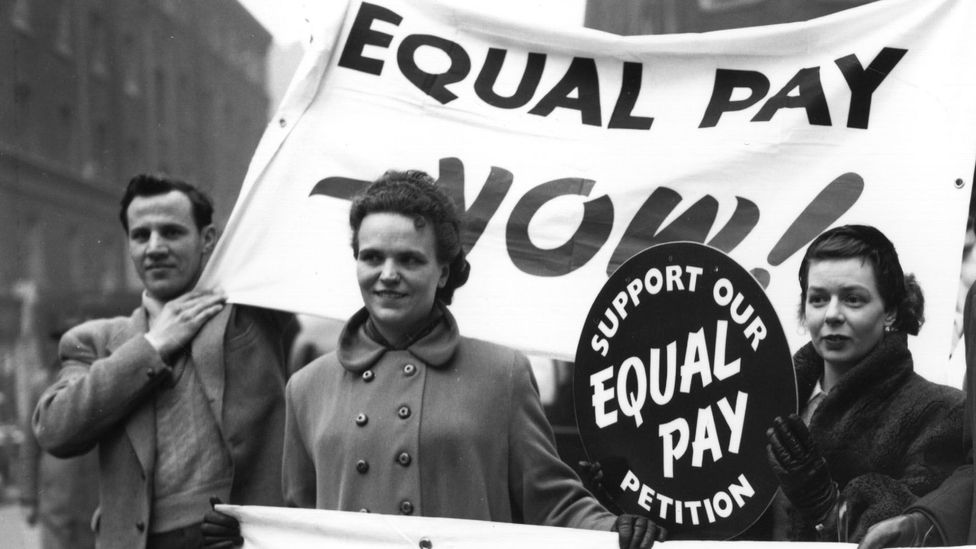 This debate has been raging for decades: here, campaigners for equal pay gather outside Caxton Hall, London in 1954 (Credit: Getty Images)

If the UK is unlikely to follow Iceland’s lead, are there any other countries looking to try something else?

Professor Sarah Kaplan, director of the Institute for Gender and the Economy at the University of Toronto, points to another model that predates Icelandic legislation – Canada, which is making strides towards closing the gap.

The policies in Ontario and Quebec, for example, focus on equal pay for equal work (through human rights legislation) and also equal pay for equal value work (through pay equity legislation). In Ontario, the Fair Workplaces Bill 148 includes a raft of new laws; from making provision for workers who suspect that they’re not receiving equal pay to ask for a review to banning employers from forcing staff to wear high-heels.

“This is more advanced than the scope of the Icelandic legislation, which only has the former,” she says. “But Iceland has reporting and fines in place which we don’t have in Canada.” Kaplan says that some of Canada’s laws enforce detailed individual audits of a company’s payment practices, which most companies comply with.

Even in the US, some states, such as Massachusetts, have banned companies asking job candidates about former salaries. That’s something that neither Iceland nor Canada has. “So, it is a patchwork of solutions, none of which can be fully effective without the others. No country or jurisdiction has put in the full suite of practices,” Kaplan says.

Richard Reeves, a senior fellow at the Brookings Institution who studies the pay gap in different industries and countries, agrees. He says that while Iceland is “at the very edge of reforms” in this space, and that it could be close to breaking real ground in the pay gap problem, it’s unwise to assume that one country’s policies can apply elsewhere. 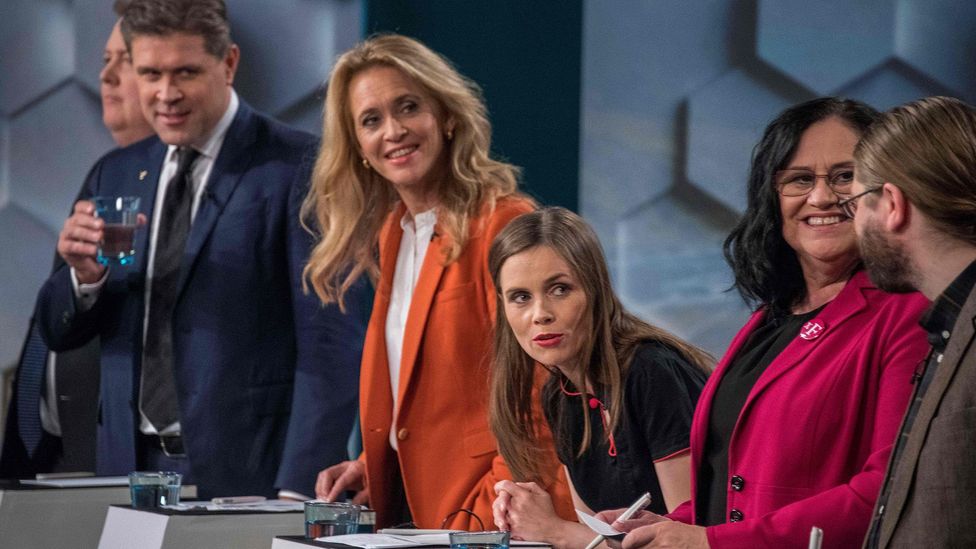 Candidates take part in a televised debate on the eve of snap parliamentary election on October 27, 2017 in Reykjavik (Credit: Getty Images)

“However, there are useful lessons to be learned here, including that gender pay equity does not happen by itself.” He feels that the more accountability and transparency, the better: in the UK, for instance, compulsory gender pay audits will help. “Just showing the scale of the problem is an important step.”

The revolution we now need is models of masculinity, not just business models – Richard Reeves

Reeves’s own research suggests that the gap will only be narrowed by a fundamental altering not just of organisational practices, but of cultural assumptions about the respective roles of men and women in the workplace and home. “Women continue to ‘juggle’ family and work life, which impacts on their earnings and advancement. Men are not yet doing the same. The revolution we now need is models of masculinity, not just business models.”

Tiny Iceland, with its population of 336,483, is a heavyweight in gender equality.

It has had the closest gender gap of any country for nine years in a row. And according to European Union data, Iceland is the world leader at including women in the labour force: participation was over 80% in 2017. This ranks Iceland not only at the top of all comparable countries but also puts the nation as the highest of all OECD countries.

Since the 1970s, more and more Icelandic women have entered the workforce and stayed there. This can be attributed to several political decisions, such as a legal right for parents to return to their job after childbirth. 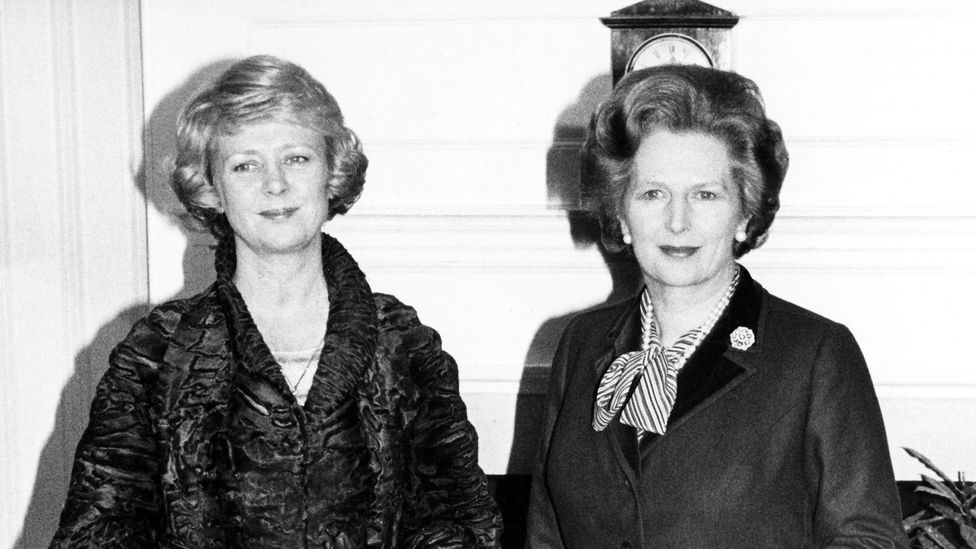 Vigdis Finnbogadottir (left), with Margaret Thatcher in 1982. Finnbogadottir’s 16-year reign remains the longest of any female head of state of any country (Credit: Getty Images)

University of Iceland gender studies professor Thorgerdur Einarsdóttir says a strong women's movement and huge pressure from feminist groups have been behind the political will in Iceland to rapidly introduce a series of radical measures in gender issues, such as paternity leave and gender quotas.

She believes the wider Icelandic culture has also been a significant contributing factor. “There is a historical legacy of strong women [here] who have inspired other women,” she says, mentioning the election of the world’s first democratically-elected female president, Vigdis Finnbogadottir, in 1980.

She points to other events such as the Women’s Day Off in 1975, a strike when half the country downed tools, this strike was repeated several times. “Maybe also the smallness of the country, close connections, and easy flow of information. It is very easy to mobilise actions where different women's groups join forces [here].”

And why should anyone care? Because the economic argument for extrapolating this success – albeit with a large caveat that no Icelandic woman believes it’s utopia just yet – is cast iron. More women contributing to the global economy futureproofs against another global recession. As well, bringing as many women into the workforce as men would be the equivalent of adding another China and another US in gross domestic product to the global economy. A “full potential” scenario, in which women play an identical role in labour markets to that of men, could add up to $28 trillion to global annual GDP by 2025, according to McKinsey’s research.

So, while moving to Iceland may not be the answer for everyone, learning a little from the Icelandic model could be an excellent start.