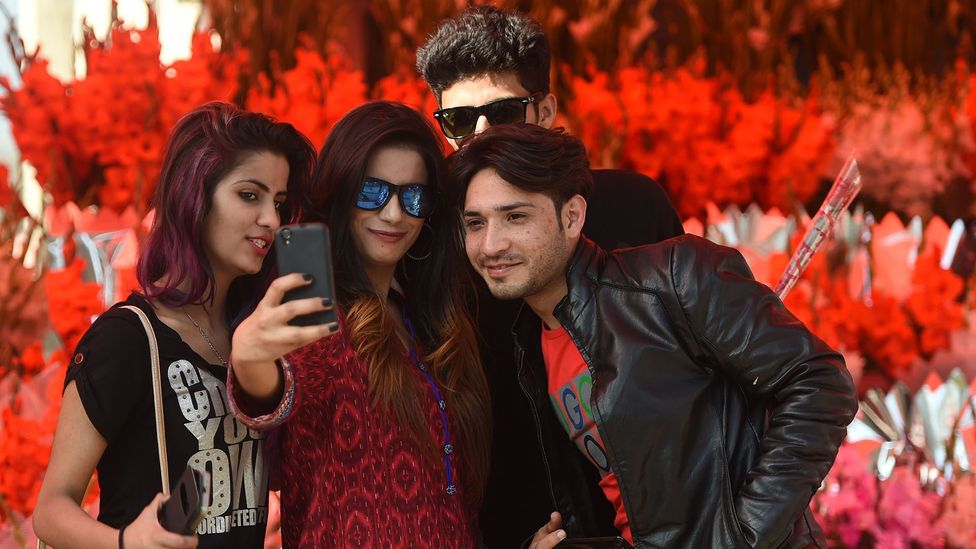 By Sophia Smith Galer 7th March 2018
Gen Z is unique in that it has been online since birth. That’s led to bullying, depression and more – but can also lead to connection, empathy and hope.
N

How are they dealing with the unique challenges of a life online?

I’ve spent the last month working on #LikeMinded, a special series about social media and its impact on our mental health. It’s forced me to question whether I (now at 23 years old) really was psychologically robust enough to confront the onslaught of picture sharing and constant messaging that arrived in my early teens. For some children, it’s arriving even earlier; it’s thought that at least 7.5 million users in the US are under the age of 13, despite having to be aged 13 or over to hold an account.

For this group, social media has shaped their entire lives. But that’s also why they’re the ones who perhaps have the most realistic concerns over whether it’s a positive force in their lives.

Teens are quick to voice concerns over platforms when asked, as shown in a 2017 survey where almost 1,500 teens said Instagram was the worst platform for their mental health. So who is making sure a life online is a happy and healthy one?

Help from schools and governments

Katy Mackenzie is a 19-year-old blogger and student from Derby who writes about beauty, lifestyle and mental health, for whom social media “was key to getting my posts shared and out there to the world.”

Like most young people, there weren’t any school lessons in how to use social media – just some safety basics that she was already aware of. “I think companies need to realise when people call out for help.” 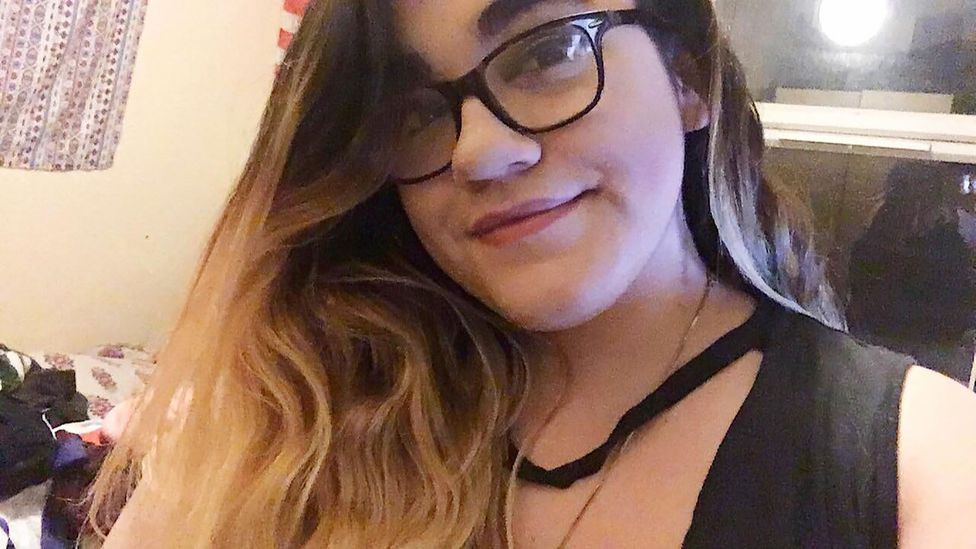 When you think about it, there are two issues there: a feeling that social media companies aren’t necessarily doing enough, and that schools might not be satisfactorily aware of the modern digital landscape. That’s not serving Gen Z well, whose lives are so interwoven with social media at such an early age.

The Royal Society of Public Health’s #StatusofMind report in the UK detailed several concerns over young people’s mental health and how social media use is linked to increased rates of anxiety, depression and poor sleep.

Social media companies themselves are steadily waking up to negative press about mental health and the many cases of underage users being on their platforms. The Children’s Online Privacy Protection Act (COPPA) is a federal law in the US stipulating that users need to be at least 13 years old to have a social media account.

If we know there are millions of under-13s on the platform, then our mental health concerns need to incorporate them as well as teenagers. 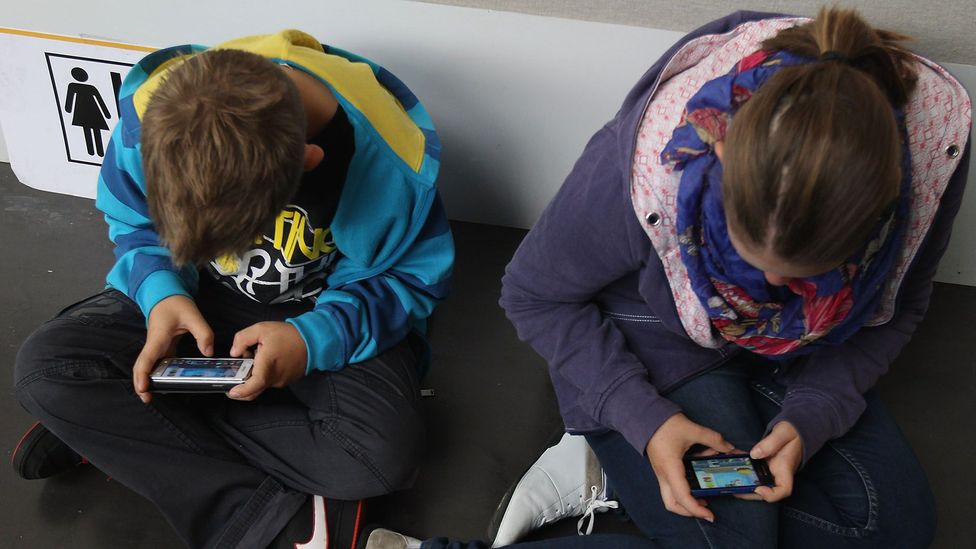 The youngest age group, those under 20 - Generation Z - hasn't known life without social media, which has presented them with unique challenges (Credit: Getty Images)

Intriguingly, apps are now surfacing to engage with young people on the very device that’s bringing them closer to these problems in the first place – their smartphones. But this ends up being pretty complicated.

The app TalkLife, for example – “share the ups and downs of life!” – calls itself ‘the peer support network for youth mental health.’ You can post anonymously, or give yourself a username. One poster writes, “I don’t want to be alive. I don’t feel worthy of even posting this. I shouldn’t. I should be alone with it. What am I doing? I’m so lost.” Two people reply: “you’ll get through this, babe. :(” and “If in your heart believed [sic] in your words you wouldn’t have said this. Think about it. And you know deep down you want to live.”

Posts that may offend, such as those with violent imagery, are coloured red and come with a warning: “This post may be triggering”.

As a platform, it feels like catnip for over-sharers, especially those who want both attention and anonymity which is impossible on mainstream social networking sites. However, there is no actual psychiatric help or health advice on the app itself, and there are obvious problems that can arise from this. The viral Saudi app Sarahah that allows users to communicate anonymously, for instance, has now been dropped from Google and Apple app stores after accusations that the anonymity actually facilitated bullying. So, as a supposed solution, what do apps like these actually solve?

What Sarahah and TalkLife have proved, however, is that there is a clear appetite here for Generation Z to do what they most love: connecting with peers online to share tips, share worries, share stories. That could be mined more usefully with better supervision.

One website that has been praised by leading psychologists is Big White Wall, which is available in Canada, New Zealand and the UK. Inspired by the early days of social networking, it’s a peer support community and now has partnerships with the NHS in keeping with best practice and the latest evidence.

It’s a versatile platform, too. You remain anonymous and can design artistic expressions of your thoughts on ‘Bricks’ to explain your thoughts and feelings. There are guided support courses to learn how to manage everything from depression to stopping smoking. They also personalise suggestions to you of how to help you feel better based on your interests. The Big White Wall gave me the testimony of one case study, who said: “I found it almost impossible to discuss with my parents and I was a bit frightened of disclosing it to my friends. Being able to talk online to other people about that was really, really useful. Otherwise, I would have kept it all bottled up.”

Any person or organisation can create an app or an online service, but the responsibility for someone’s mental health can be a matter of life and death - James de Bathe

Commercial director James de Bathe says that “rather than looking at the number of online solutions available for young people, we focus much more on the quality and safety of these.

“Any person or organisation can create an app or an online service, but the responsibility for someone’s mental health can be a matter of life and death. We believe clinical oversight, rigorous evaluation and quality assurance should form the foundations of online support services.”

Perhaps the real solutions to the new difficulties that Generation Z online should be like Big White Wall – answers that lie outside the corporate interests of mainstream social media companies, and which allow under-20s to connect with each other in the way they’ve grown accustomed to on these very online platforms.

How realistic is it that companies like Facebook and Twitter would try to make themselves less addictive for the sake of young people’s sanity? Marketing professor Adam Alter from New York University thinks “the incentives aren’t aligned appropriately to encourage them to consider consumer wellbeing.

“If you’re competing for attention there’s an arms race – and companies aren’t going to introduce stopping cues, for example, if none of their competitors are doing the same thing. If they can’t keep you glued to their products, they’re unlikely to attract ad and referral revenue.”

This didn’t stop London-based design agency Studio Output from having a go, though. The team devised a number of simple changes that a platform like Instagram could make, if there was incentive enough to do so, in order reduce certain risks for its users.

One feature is ‘a mindful algorithm’ that serves you happy news if it spots that your posts include words that flag poor mental wellbeing, giving you good news if you needed it. Other ideas are smart notifications that are geo-fenced to know when you need some downtime. Activity trackers that, like step-counters or other physical trackers we use, actually measure your social media habits and encourage users to set goals. They also suggest colour-coded profiles, depending on how realistic profiles are; those accounts that regularly post unrealistic, Photoshopped or heavily filtered body images will be flagged red.

When I asked their strategy director, David McDougall, if he ever thought social networking sites would ever implement changes like this, he said “my answer is undoubtedly yes. It makes good business sense to look after your users, and looking after your users means creating a healthy, happy and sustainable environment.”

Whether it’s the social behemoths like Facebook or the upcoming social safe spaces like Big White Wall who finally instigate change for young people, for many the change may already come too late.

But with a generation that’s hungrier than ever to connect across continents and share their ideas for a healthier social media landscape, Generation Z might actually be the age group that’s most in-tune with their feelings after all. Parents worried that their kids are spending too much time staring at a screen might relax a little in the knowledge that they may well be getting the help they deserve.