Loading
Money
Does a cashless society benefit everyone?
Share using EmailShare on TwitterShare on FacebookShare on Linkedin 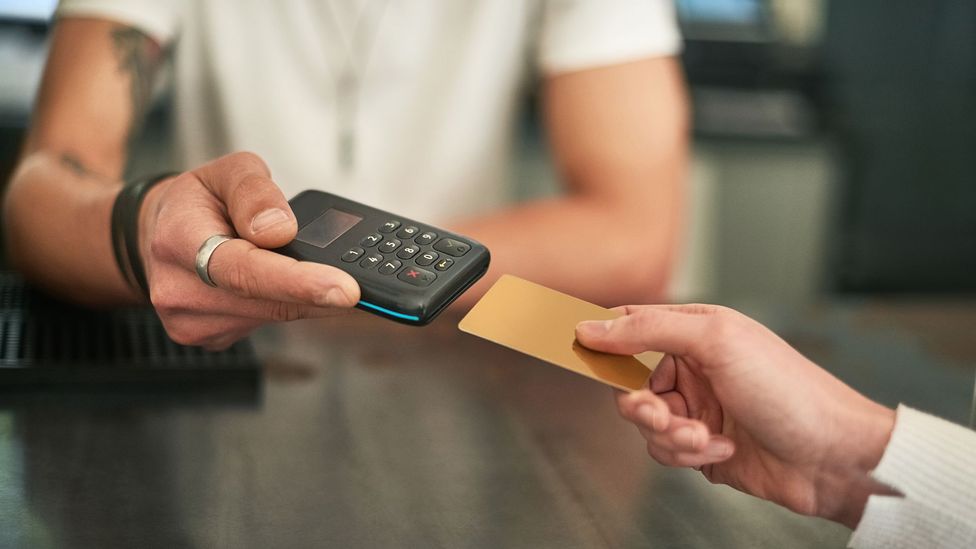 As paper money disappears, in countries from Sweden to India, some might get left behind
T

This story is from Who Needs Cash? an episode of Business Daily on BBC World Service. It was presented by Rob Young and produced by Vicki Broadbent. To listen to more episodes of Business Daily, please click here. Adapted by Sarah Keating.

“I think if cash disappears all over, it will be a very big problem… I’m afraid it is going too fast… so it’s a big concern if you have that feeling that society is not for you.”

Maijlis Jonsson is a 73-year-old living in the centre of Sweden’s capital Stockholm. She leads an active life with her friends, travelling around the city and meeting in coffee shops. However, one issue keeps cropping up that causes her stress.

Sweden has been steadily moving towards a completely cashless society for a number of years. Cash is now used in less than one in five of all cash transactions in stores – half the number as five years ago. The country has banned notes and coins on buses, many tourist attractions take plastic-only transactions.

The law says shops can refuse to accept cash. So many stores now have signs reading, “no cash, please.” Life can be hard for those unwilling or unable to embrace the changes.

Not everyone hates cash

Maijlis Jonsson is one such person. She must go to a bank in order to pay her friend back for a train ticket bought digitally. “Usually the fee is 79 krona which is about $9,” she says. “It is an awful lot of money… of course they always say you can do it for free on the internet but it’s a problem… some [of us] don’t know how to do it.”

She tries to pay for a cup of coffee at a café but the cashier refuses. “He didn’t want to have my money so I have to pay by card,” she says, adding that, in any case, ATMs are becoming harder and harder to come by in Stockholm.

Niklas Arvidsson, professor at the KTH Royal Institute of Technology and Sweden’s leading expert on the payment system, acknowledges that certain demographics are in danger of being left behind, like the elderly.

“We’ve also got a problem with smaller merchants in rural areas where perhaps the telecom systems are not working,” he says. 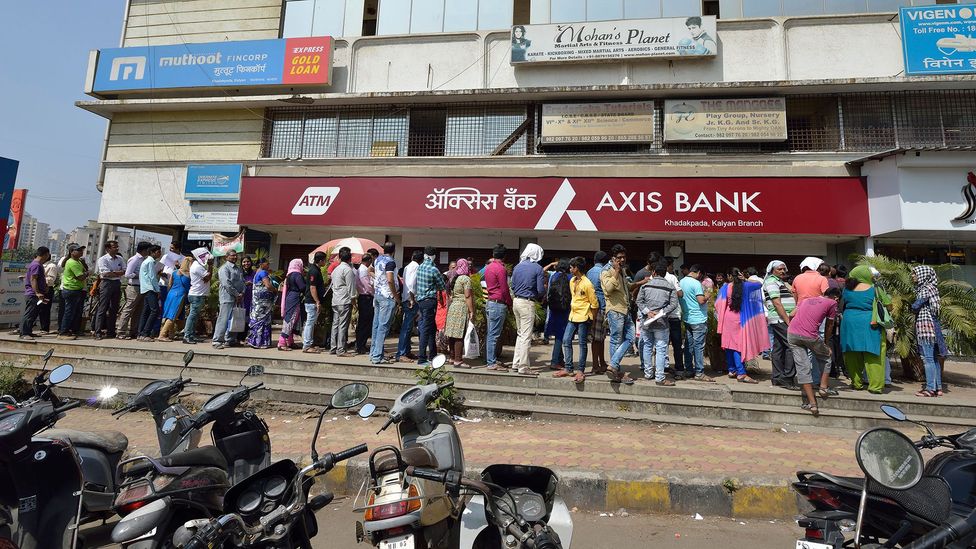 Some denominations of Indian bank notes were discontinued in 2016 leading to long queues of people waiting to withdraw money (Credit: Getty Images)

Cash’s death and shifts of power

Is Sweden benefitting from all this? According to Arvidsson, it is.

“If you look at the sort of macro-economic prospective, then yes,” he says. “Electronic transactions are quicker and cost less in general and make the payment system more efficient.”

He also points out that “it is a little bit more difficult in general for the people to get away with [not] paying taxes or making small thefts without cash.”

We might end up in a situation [where] a few commercial banks have a lot of power. The counterforce against that is the growth of tech companies - Niklas Arvidsson

However, as with all moves towards uncharted territory, who holds the power? Will we be handing it over to a small number of private companies who hold the keys to how these payment systems work?

It is a risk, admits Arvidsson.

“We might end up in a situation [where] a few commercial banks have a lot of power. The counterforce against that is the growth of tech companies, developing services that can compete with banks, and hopefully will get still a very competitive market where we don’t see oligopolistic profit – and then too much powers resting in the hands of a few actors.”

Sweden is not the only country eyeing up a cashless future.

India is looking to step away from traditional cash transactions. But some say it took an extreme, perhaps brutal step at forcing people to embrace digital transactions.

The government withdrew some high denomination bank notes from circulation over a year ago. The move hit the economy and many poor people albeit for a short period.

India’s prime minister Narendra Modi created dozens of cashless townships where notes and coins are discouraged. There is even a government ministry dedicated to driving the change.

But India is a vast country and with an estimated 270 million Indians below the poverty line. Is a cashless future actually desirable even if it is possible?

Monika Halan, editor of the Delhi-based financial newspaper Mint, says the Indian government is motivated by a variety of factors. She says it is partly to do with cracking down on money earned on the black market, as well as the financing of terror. But it is also to do with financial inclusion and financialisation of the economy.

“There are reasons why people would not enter a bank branch,” she explains. “They were afraid of being mocked, their notes were dirty. They did not have the confidence that they would get treated well by the bank managers.”

She also points to another issue: banks in rural areas do not have adequate staff or resources. “If you look at the way people save in the poorer parts of the country or even in the urban informal sector, it’s really a lot of informal funds where they collect money themselves. And a lot of people lose that money.” People want their money to be safe, she argues, so of course people want to put their money into banks rather than have cash at home.

Halan also describes how digital banking via cheap mobile devices has levelled the playing field for less well-off service providers. As soon as the price of mobile phones fell, street vendors, carpenters, sweepers – India’s thriving entrepreneurial spirit embodied – bought them in order to increase their business. Thanks to these tools, they are now able to do what the rich and elite do.

Of course, with an increase in digital transactions, the question of data security comes into play. As we freefall through an increasingly virtual world – and payments over the cloud instead of payments with paper – who has access to our information? For Monica Halan, it is a global problem with no easy solution.

“I think those are the issues the entire world right now is grappling with post-Facebook,” she says. “Government and regulators have to act really fast to plug the data breaches which are happening all across the world, and even in India.”

But she remains largely positive about these policies towards demonetisation. “It’s like a virtual infrastructure is being built… if a highway or a railroad has the capacity to bring people in business closer and increase output, the same thing will happen with technology.”

“I really do believe that once the technology genie is out of the bottle, how do you put it back?”