Our stubborn reluctance to change keys.

Barbara Blackburn could type so fast that computers struggled to keep up.

“She’d write and then she’d wait two to three minutes for the computer to type out what she had written,” explains Linda Lewis, the Founder of Keytime, a Seattle-based typing school.

It was the early 1990s, when computers were sluggish and software could be temperamental. But Blackburn was a Guinness World Record holder. She could maintain 150 words per minute for 50 minutes with a peak speed of 212 words per minute – that is faster than most people speak. The other typists in the Oregon insurance office where she regularly worked were jealous, says Lewis.

Qwerty was suddenly everywhere, supported by a series of self-reinforcing relationships

But rather than using the traditional Qwerty keyboard most computer and typewriter users over the past century will be familiar with, Blackburn used an alternative layout known as Dvorak. Lewis saw Blackburn in action after hiring her to showcase the keyboard at a technology conference in Seattle.

The Dvorak has a cult following. Its supporters say it’s faster, easier to learn and better for your poor, overworked fingers. They say 70% of keystrokes are on the home row – the keys where typists rest their fingers – on the Dvorak, versus 31% on a Qwerty. They say you can type thousands of words on a Dvorak’s home row, but only a few hundred on a Qwerty’s. They cite studies showing its superiority. They point to Barbara Blackburn. 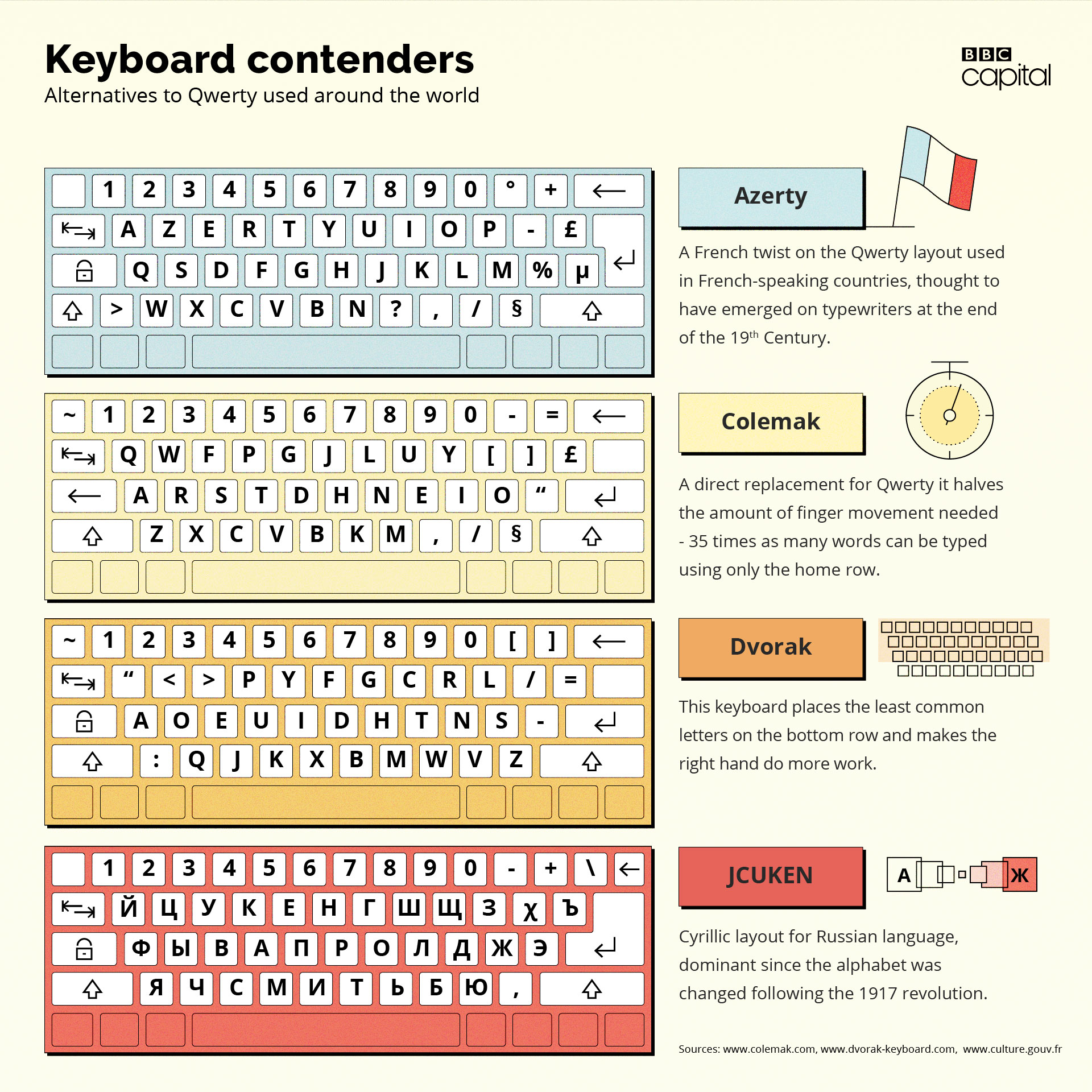 Pinch and zoom on mobile to expand

But it’s all in vain. Qwerty is king. Not, it’s critics say, because it’s the best, but because changing is just too difficult and costly.

“Qwerty is a pile of garbage from the 1800s and you shouldn’t use it. It’s bad for your hands,” says Alec Longstreth, a cartoonist who now lives in New Mexico.

He’s a Dvorak true believer and evangelist. After learning how to use one in college in the 1990s, he told everyone about it. He was overzealous, and “a jerk about it”, because he couldn’t fathom why anyone would use Qwerty.  Along with two friends, he created a fanzine to spread the word. Thousands were printed, and the three friends lost money on every copy – such is the passion Dvorak inspires among its users.

“It’s aggravating,” says Longstreth. “Can you imagine there was some other means of transport that was 70% more efficient than driving a car. You’d think ‘what are all these morons doing driving a car?’” He eventually gave up trying to spread the word because he found it tiring being a technological Cassandra, forever shouting at deaf ears in online forums. 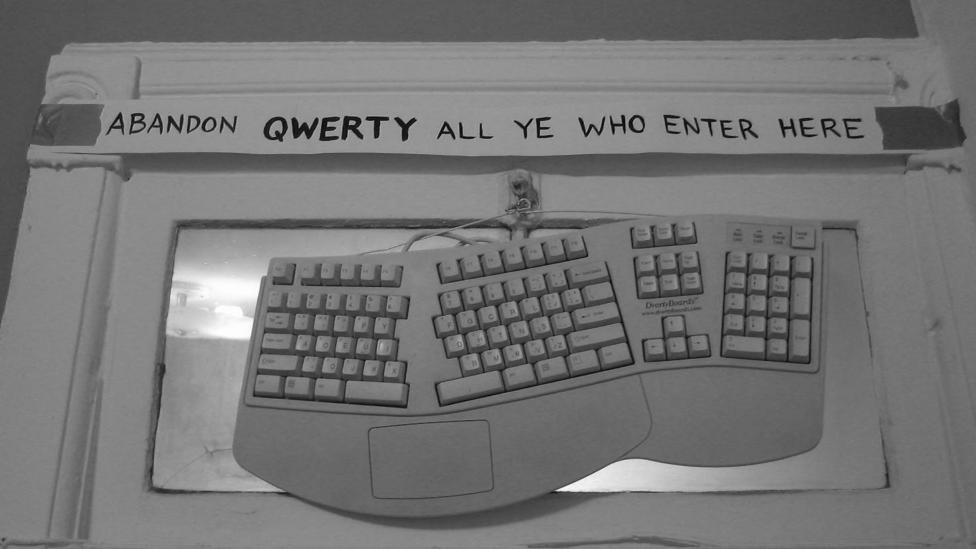 It’s a common pattern for Dvorak enthusiasts. Augustus Dvorak, who designed the layout in the 1930s, died a frustrated man. His life’s work just never caught on. And yet, at various times, the Dvorak keyboard seemed as if it was on the cusp making it big. In 1985, the Washington Post reported that directory assistance operators across the country were using Dvorak, and state governments in Oregon and New Jersey were starting to switch. Apple was enthusiastic early in its history. Co-founder Steve Wozniak is a well-known Dvorak user. Nowadays, every major operating system supports it, although you have to re-label the keys.

Nobody knows how many people use it, but it’s probably not many. Canadian firm Matias is possibly the only manufacturer to make physical Dvorak keyboards, and it sells fewer than a thousand a year. It accounts for about 0.1% of their total sales. 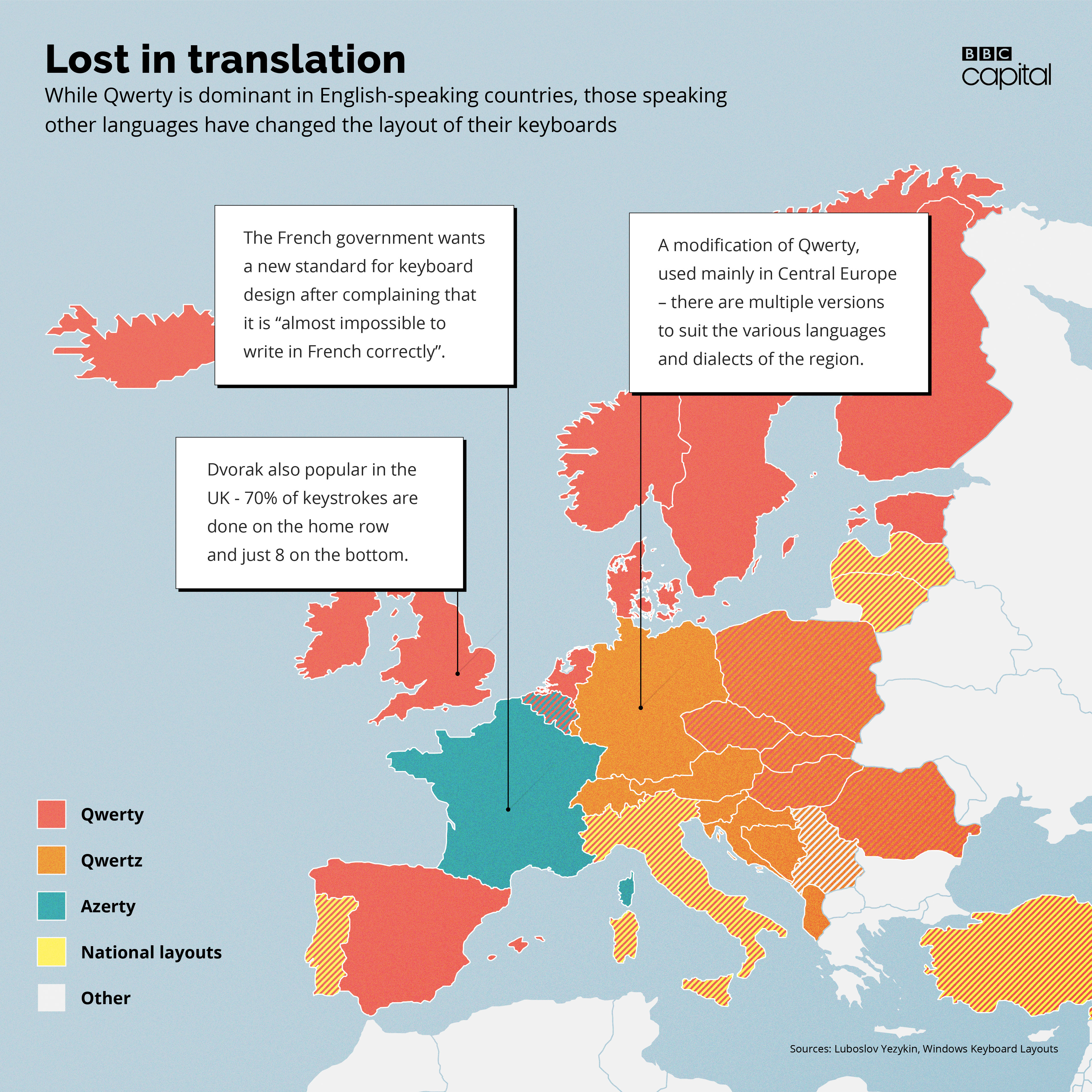 Pinch and zoom on mobile to expand

“People are resistant to change, whether something is better or not,” says Linda Lewis. “They don’t want to hear about anything different because it took them so long to learn to type.”

Fable of the keys

For some time, the Qwerty versus Dvorak duel was the stuff of first year university lectures; the perfect way to explain “path dependence”, an economic theory that attempted to challenge the notion that free markets always pushed society towards the most efficient technology.

It was a Milwaukee printer Christopher Latham Sholes who invented the typewriter, and over a number of years developed Qwerty, which he sold to the manufacturer Remington. The best-known explanation for why Qwerty doesn’t seem to resemble the alphabet is that he separated the most commonly used key combinations in an effort to stop the machine from jamming.

Alternatively, Japanese historians Koichi Yasuoka and Motoko Yasuoka have suggested the needs of telegraph operators influenced the design, as did compromises between inventors and producers, and intellectual property issues. Either way, it wasn’t aimed at creating the fastest or easiest standard.

Stanford University economist Paul David argued that it became dominant because early “touch typing” techniques were most closely associated with Qwerty. Schools taught touch typing on Qwerty. Companies bought Qwerty typewriters because there was a pool of typists who knew how to use them. Typists would learn it knowing it would probably get them a job. Qwerty was suddenly everywhere, supported by a series of self-reinforcing relationships. By the time Dvorak came along, it was too late.

But critics reject this interpretation. In a 1990 paper titled “the fable of the keys”, Stan Liebowitz of the University of Texas at Dallas and Stephen Margolis of the University of California say the tests that found the Dvorak keyboard to be unquestionably better were conducted by Mr Dvorak himself, and he had a significant financial stake in its success. Subsequent tests in 1956 by the General Services Administration, they argued, actually cast serious doubt on the Dvorak’s value. 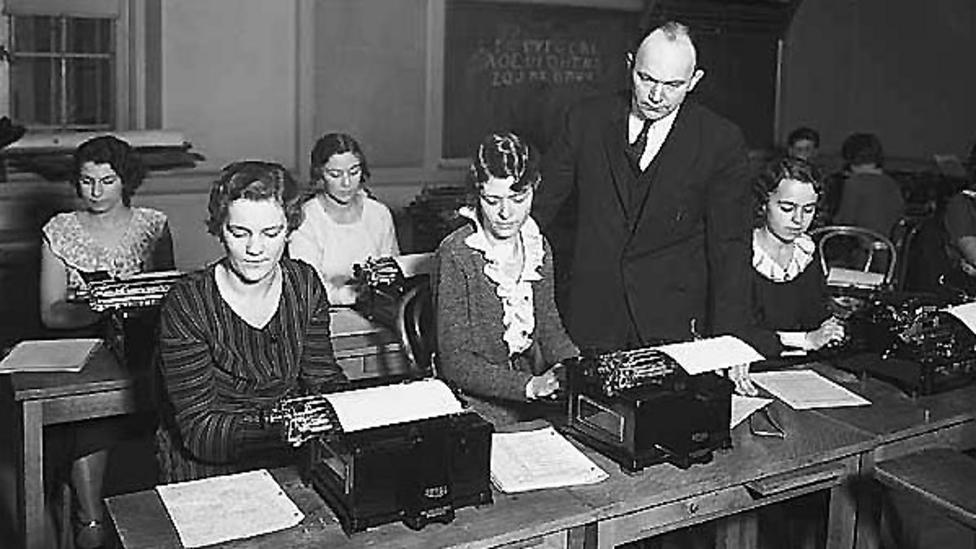 Dvorak users, however, can point to plenty of evidence in their favour. Linda Lewis, whose typing school teaches both, says students who learn Dvorak can type 20-30 words a minute in the same time that Qwerty students learn to type 10-15.

Martin Krzywinski, who primarily works in science data visualisation at the British Columbia Cancer Agency in Vancouver, set up a computer simulation which scores keyboard arrangements on their ease of use. The lower the score the better, and Dvorak scored 2.1 against Qwerty’s 3.0. Another keyboard format known as Colemak, the third most popular after Qwerty and Dvorak, scores 1.8, and Krzywinski has created his own layout that scores 1.67.

At least half a dozen scientific tests conducted using human subjects between the 1930s to the 1970s also consistently found in favour of Dvorak too. The problem, though, is that the winning margin wasn’t always so compelling. A few tests found that it produced an improvement of more than 20%, but for others it was just a few per cent.

If a business or government department trained a worker on Dvorak, they would be absent for four hours every working day for five weeks

The General Services Administration’s assessment was possibly the most damning. It suggested that if a business or government department trained a worker on Dvorak, they would be absent for four hours every working day for five weeks. At the end of it, they wouldn’t be any faster. Those test subjects improved with additional training, but didn’t do as well as subjects given extra training on Qwerty. Their conclusion wasn’t that Qwerty is better, but that changing is just too expensive. 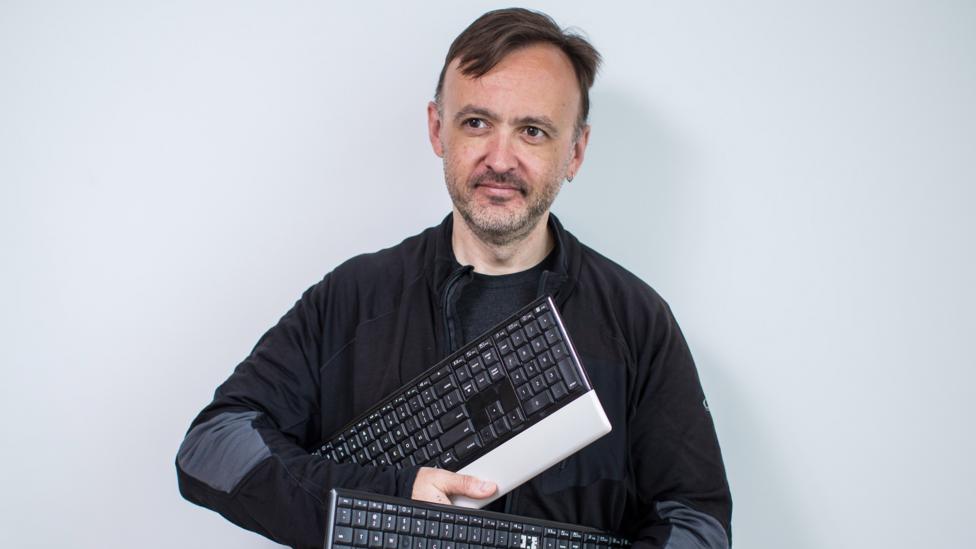 “For most people the switching cost won’t actually be worth it,” says Shai Coleman, who invented the Colemak format. That’s a little surprising, given Colemak is designed to make it easy for Qwerty users to switch. Even so, Coleman estimates that maybe 100,000 people globally use it.

And even if it isn’t the best standard, having a widely-used standard like Qwerty makes sense, he says. It means you can sit down at any computer, whether at an airport or a library, and still know where all the keys are.

Worst keyboard in the world

Alec Longstreth likens Qwerty to “wearing a pair of running shoes that are made of concrete”. But it could be worse.

Nobody uses it, save for a Brazilian fashion designer who used typewriter keys arranged in the TNWMLC layout as part of a clothing line

It’s 87% more difficult than using a standard Qwerty keyboard, according to Martin Krzywinski, who created it. Nobody has ever used it, save for a Brazilian fashion designer who once used typewriter keys arranged in the TNWMLC layout as part of a clothing line.

It’s a creative use for a layout. But Kryzwinki points out that the way we use keyboards is very personal, and because it differs dramatically from person to person, it’s extremely difficult to declare one keyboard is objectively better. Programmers, writers and executive assistants probably don’t have the same needs.

“It’s kind of like ‘what’s the best shoe?’,” he says. “Maybe one that doesn’t make your feet bleed? We can agree on that. But beyond that, I don’t know.”

And because needs have changed over time, Qwerty’s disadvantages probably aren’t as pronounced as they once were. Dictation and rote copying were once essential skills for typists, but no longer. Even Barbara Blackburn would lose to the copy/paste function. Software has picked up at least some of the slack.

Could it be that Qwerty, which divides up common letter pairings, is the best format for fat thumbs struggling with small letters and predictive text?

Besides, the same rules don’t really apply for gaming or texting on smartphones. Shai Coleman says, in fact, Qwerty is better than Colemak on a smartphone. Could it be that a format like Qwerty, which divides up common letter pairings, is the best format for fat thumbs struggling with small letters and predictive text?

The world record holder for fast texting used Qwerty on a keyboard app called Fleksy. Olivier Plante, the chief executive of Fleksy, says the layout isn’t quite as important as the software when it comes to texting quickly.

“If you start typing fast for a very long time, some keyboards will start lagging,” he explains. It’s almost like the keys jamming on an early typewriter. 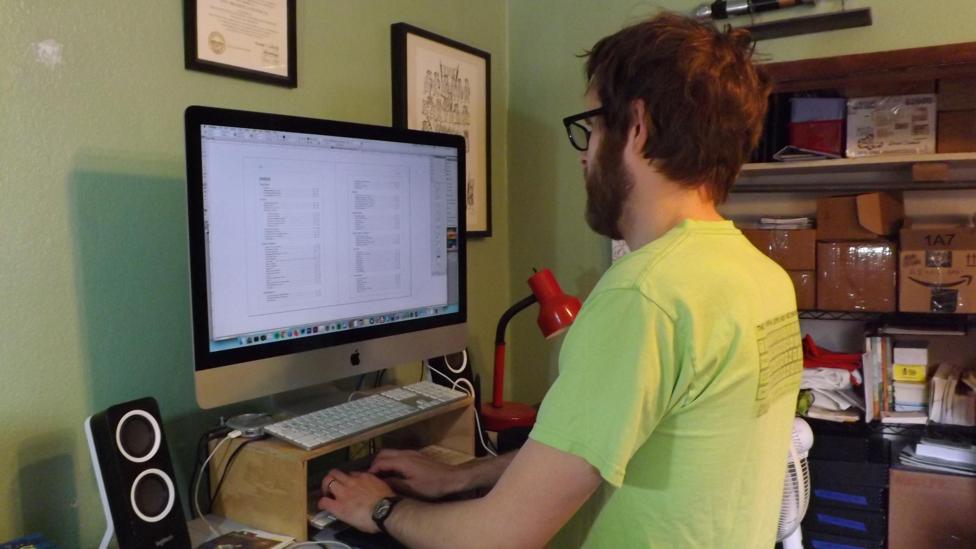 Alec Longstreth is a cartoonist who likens Qwerty to 'wearing a pair of running shoes that are made of concrete' (Credit: Alec Longstreth)

A day late, a dollar short

Even so, Barbara Blackburn herself demonstrated why a better keyboard layout doesn’t always matter. In 1985, she made an appearance on Late Night with David Letterman. Blackburn sat on the stage next to the talk show presenter, confident and composed, wearing a Pepto Bismol-coloured top and a chunky crucifix. She had tight curls and math teacher glasses.

“Do you make extra money because you’re fast at this?” asked Letterman.

“No,” was her simple response.

“No kidding? Boy, that stinks!”

He couldn’t pass up the opportunity to put her skills to the test. So, he set up a contest with the show’s best typist, Barbara Baird, who could type 85 words per minute. The bell rang and the music started, and the typewriters clattered. But then, about 30 seconds in, the crowd roared with laughter as it became clear there was no paper in Blackburn’s typewriter.

After a second attempt, the contest descended further into farce when Blackburn’s typing paper was revealed to contain be gibberish. In a subsequent episode, Letterman assembled a “blue ribbon panel” to get to the bottom of it. They found that, perhaps nervous about being on TV, she moved her finger one key to the right before the starting bell.

In a way, its an apt metaphor for the Dvorak keyboard: it doesn’t matter if you’re the best if you hit the wrong keys at the critical moment. Somehow, it’s timing was off and the competition was never quite bad enough.