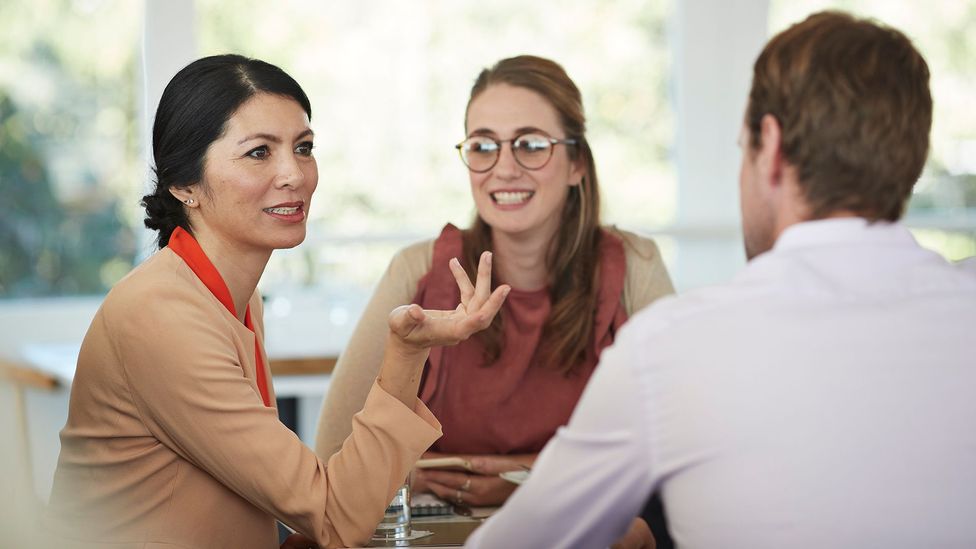 By David Robson 13th June 2018
We’re not talking Barry White here but some fascinating research reveals how women’s voices are becoming deeper in some countries.

If you listen to radio programmes from the 1940s and 1950s you’ll notice some striking differences between the way that people spoke then and how we express ourselves today.

The most noticeable change can be heard in their accents. Language is not static but dynamic, constantly evolving to suit the fashions of the time and this results in a shift in pronunciation.

Women today speak at a deeper pitch than their mothers or grandmothers would have done, thanks to the changing power dynamics between men and women

In the UK, for instance, far fewer people talk with “received pronunciation” these days – and even Queen Elizabeth II’s voice has lost some of the cut-glass vowels of her youth. This is thought to reflect a more general shake-up in Britain’s social hierarchies, leading to a kind of linguistic cross-pollination between the classes that has even reached Her Majesty.

But once you move past those accents, you’ll find another social transformation mirrored in our voices: women today speak at a deeper pitch than their mothers or grandmothers would have done, thanks to the changing power dynamics between men and women. 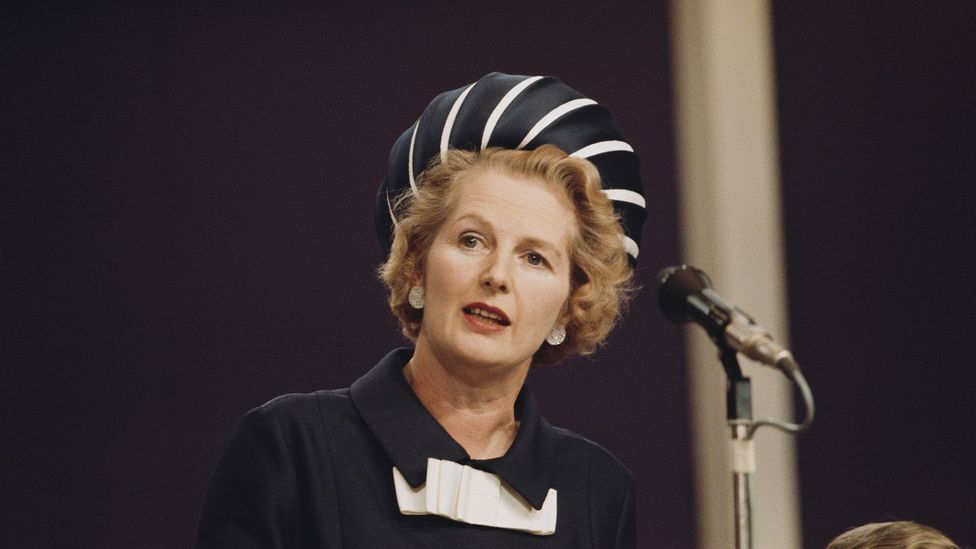 Former British Prime Minister Margaret Thatcher employed a voice coach to help lower her voice in an attempt to give herself more authority (Credit: Getty Images)

Cecilia Pemberton at the University of South Australia studied the voices of two groups of Australian women aged 18–25 years. The researchers compared archival recordings of women talking in 1945 with more recent recordings taken in the early 1990s. The team found that the “fundamental frequency” had dropped by 23 Hz over five decades – from an average of 229 Hz (roughly an A# below middle C) to 206 Hz (roughly a G#). That’s a significant, audible difference.

The researchers had carefully selected their samples to control for any potential demographic factors: the women were all university students and none of them smoked. The team also considered the fact that members of the more recent group from the 1990s were using the contraceptive pill, which could have led to hormonal changes that could have altered the vocal chords. Yet the drop in pitch remained even when the team excluded those women from their sample.

Instead, the researchers speculated that the transformation reflects the rise of women to more prominent roles in society, leading them to adopt a deeper tone to project authority and dominance in the workplace.

Former UK prime minister Margaret Thatcher employed a professional speech coach to help her to sound more authoritative, deliberately dropping the pitch of her voice by a massive 60 Hz. And while most of us may not go to such great lengths, recent research shows that we all spontaneously adapt the pitch of our voices to signal our perceived social rank.

For both men and women, the people who had lowered their pitch ended up with a higher social rank

In one experiment, Joey Cheng of the University of Illinois at Urbana-Champaign asked groups of four to seven participants to perform an unusual decision-making task that involved ranking the items that an astronaut would need to survive a disaster on the moon. And at the end, she also asked each member to (privately) describe the pecking order of the group and to rank each member’s dominance.

Recording the participants’ discussions throughout the task, she found that most people quickly shifted the pitch of their voice within the first few minutes of the conversation, changes that predicted their later ranking within the group.

It’s a common tactic in nature, with many other primates – from rhesus macaques to our closest relatives, chimpanzees – lowering their vocal pitch during altercations

For both men and women, the people who had lowered their pitch ended up with a higher social rank, and were considered to be more dominant in the group, while the people who had raised their pitch were considered to be more submissive and had a lower social rank. “You were able to predict what happened to the group, in terms of the hierarchies, just from these initial moments,” Cheng says. 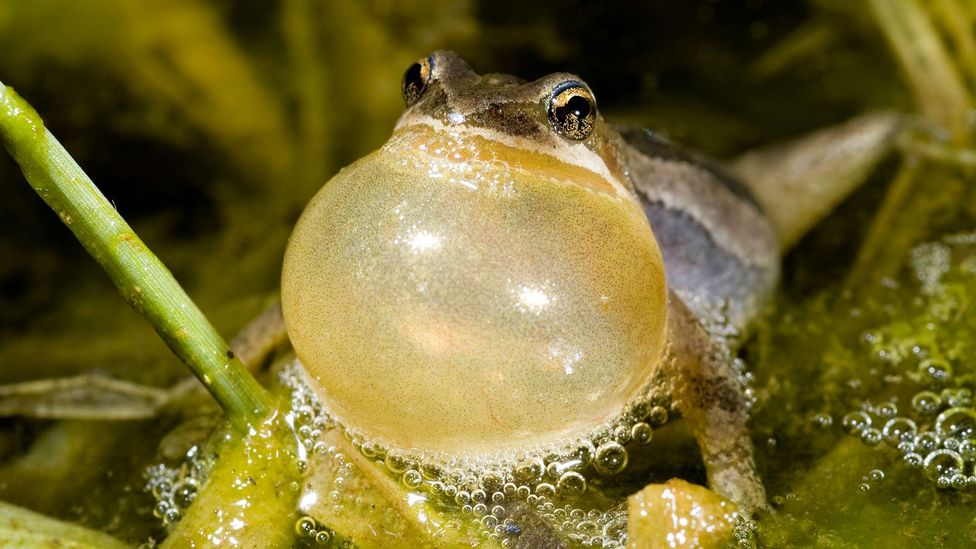 Many animals, such as male frogs, lower their vocal pitch to assert their dominance over others nearby (Credit: Getty Images)

As Cheng points out, it’s a common tactic in nature, with many other primates – from rhesus macaques to our closest relatives, chimpanzees – lowering their vocal pitch during altercations. “It signals to others that their intention is to be ready to fight and protect their resources – to assert their status.” And the same connotations were apparent for the humans who had lowered their voices too. “They were rated by others as being more domineering and more willing to impose their will over others, and as a function of that, they were able to gather more influence and make decisions on the group’s behalf.”

Cheng’s findings are certainly consistent with Pemberton’s hypothesis that greater gender equality explains the long-term vocal shift in those Australian women – a pattern that has now been recorded in Sweden, the US and Canada. Whether consciously or unconsciously, women appear to be adapting their vocal profile to suit the opportunities that are available to them today.

Interestingly, the influence of perceived dominance on vocal pitch can also be heard when you compare voices between countries. Women in the Netherlands consistently talk in deeper voices than women in Japan, for instance, and this seems to be linked to the prevailing gender stereotypes – independence versus powerlessness, for instance – in the different cultures (an inequality that is also reflected in a much larger gender pay gap in Japan).

And Cheng points out that these changing vocal dynamics may not always be an advantage for women, even in the countries where a deeper speaking voice is now more common.

“While lower voices – and other assertive behaviour in general – effectively signal and assert power and authority in women, as it does in men, it might also have the unintended effect of undermining how well liked they are,” she says, pointing to research showing that a deeper voice is considered to be less sexually attractive and less agreeable, for instance.

In this way, it could be another example of the “double-bind” that women face in the workplace, in which the very same qualities that are praised in men may still be judged negatively in their female colleagues. Just consider the media’s discussions of Hillary Clinton, who was considered either to be too “shrill” or too “unemotional”. The deeper speaking voices may be one audible sign of progress, but we clearly still have a long way to go before we eliminate those prejudices.

David Robson is a freelance writer based in the UK. He is @d_a_robson on Twitter.

worklife
1The famous actors you never see
worklife
2Can your voice sound a million dollars?
Around the BBC