Researchers have found that, in some cases, diversity training can be more harmful than beneficial.

This story is from The Inquiry on BBC World Service. It was presented by Helen Grady and produced by Josephine Casserly and Dearbhail Starr. To listen to more episodes of The Inquiry, please click here. Adapted by Sarah Keating.

In April two black men went into a Starbucks in Philadelphia. They were early for a business meeting, so they sat down to wait. Two minutes later, the store manager called the police.

“I have two men in my café that are refusing to make a purchase or leave,” the store manager said in a recording released by the police.

Donte Robinson and Rashon Nelson explained that they didn’t want to order until their colleague arrived. When their colleague turned up, he found the police forcibly removing the two men from the coffee shop in handcuffs.

Starbucks closed 8,000 stores for one day to host racial bias training for its employees after two black customers were arrested while waiting for a friend (Credit: Getty Images)

The incident, which was filmed by another customer, blew up on social media, and Starbucks CEO Howard Schulz responded by admitting he believed his store manager "demonstrated her own level of unconscious bias".

The Starbucks boss put his money where his mouth is and closed 8,000 stores for one day so staff could attend anti-bias training. Other organisations are rolling out similar workshops. They’re keen to make sure all staff and customers are treated fairly. But do these programmes work? Can you train people to be less prejudiced?

Jamie Perry, assistant professor of human resources at Cornell University, thinks you can, but in order for it to be effective, the training must make you aware of both your explicit (or conscious) and implicit biases.

The theory is that a slow drip of stereotypes seeps into each and every one of us. Sometimes inherited by our family, sometimes based on who we do and don’t see in power, and sometimes picked up from friends or the media.

Effective anti-bias training “teaches you strategies to consciously push down these biases”, says Perry. “For example, you might hold in your head that women can only do administrative jobs. So counteracting that is priming yourself every day to think about women in managerial roles…that’s how you might replace a negative stereotype.”

And while Perry believes this training can reduce prejudice at work, she says a one-time workshop is less effective than a series of ones that take place over a larger period of time.

“It’s a journey, not a destination that you reach,” she says.

Under equality laws, firms that fail to tackle discrimination face costly lawsuits, and there’s evidence that happy, diverse workforces are more creative. So, there’s money to be made in anti-bias training from face-to-face workshops to online self-guided courses.

Alexandra Kalev, a sociologist at Tel Aviv University, used to think that diversity training was effective, that it felt like common sense – and then she investigated the impact of training. 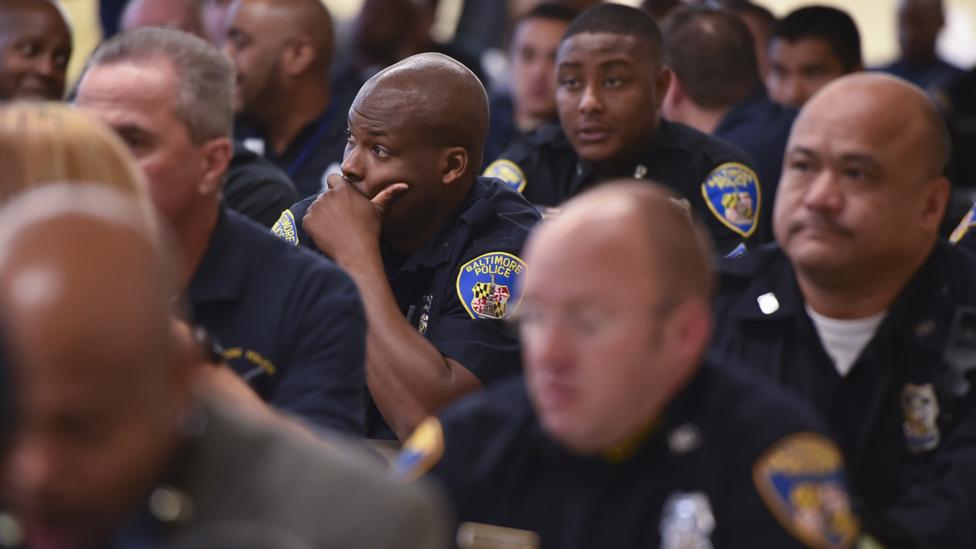 Given the number of high-profile police shootings of unarmed black men, law enforcement officials are introducing racial bias training – but does it work? (Credit: Getty Images)

Her team looked at 800 companies over 30 years and evaluated the impact of diversity training. They discovered some surprising – and troubling – findings.

Firstly, they found that this training normalises the message that implicit bias is everywhere and so we are all biased. “If I am interviewing black and white candidates it can be normal that I will feel more attracted or have a better gut feeling regarding the white candidates.”

She says one way to overcome this very deeply wired human reaction is to make diversity training voluntary, but that’s not an idea that’s popular with companies. They want to be able to show in court that they spent money to reduce prejudice in their workplaces should they need to in the future.

“The effect of bias training is very weak if you look at the long run,” says Kalev. “A company is better off doing nothing than mandatory diversity training.”

Yale University psychology professor John Dovidio explains implicit bias is similar to a phobia. “You can teach people who have a fear of flying all you want about flight safety records but that knowledge doesn’t actually address emotional experiences that they’re having.”

The only way you can get rid of a phobia is to give people experiences showing them that it’s safe, he says. People trust their own first-hand experiences.

So how do you apply that to a workplace? “Provide people with opportunities to interact with members of different groups,” says Dovido. “The best way to do it is around projects where people are working cooperatively, where people have shared goals because this common connection allows us to think of others and ourselves as team members and make race or gender recede into the background.”

However, if biases are formed over a lifetime, dismantling them will be slow work. So, what can we do in the here and now?

Jennifer Eberhardt, a social psychologist at Stanford University, has first-hand experience of how young implicit biases start, as well as how powerful they can be even against ourselves.

On a flight with her five-year-old son, he pointed out the only other black passenger on board and told his mum that he looked just like his daddy. Before she could explain that the man shared no similarities to his father except for skin color, her son added, “I hope he doesn’t rob the plane.” Eberhardt asked him why he said that. “He looked at me with these sad eyes, a sad face and he says ‘I don’t know why I said that, I don’t know why I was thinking that,’” she remembers.

In relation to workplace prejudice, Eberhardt explains that to counteract bias, managers could create objective boundaries around a job description. These boundaries make it harder for our biases to creep in, and we also become less biased when there’s proper scrutiny about our decisions. The idea is that we all behave better when we know we’re being watched.

It is for this reason that many police forces have introduced body cameras so officers interactions with the public are recorded.

Dismantling prejudice is slow and risky work. It involves forcing people out of their comfort zones and helping them to get to know the kind of people they don’t usually spend time with.

So can you train people to be less prejudiced? If you’re relying on short courses and workshops the answer is no – especially if they are mandatory. But if it’s part of a bigger plan to encourage diversity and build in scrutiny then you’re in with a chance.

You might not change how people think and feel but you can change how they act and that’s a start.