Loading
Workplace
Mansplaining, explained in one simple chart
Share using EmailShare on TwitterShare on FacebookShare on LinkedinShare on Whatsapp 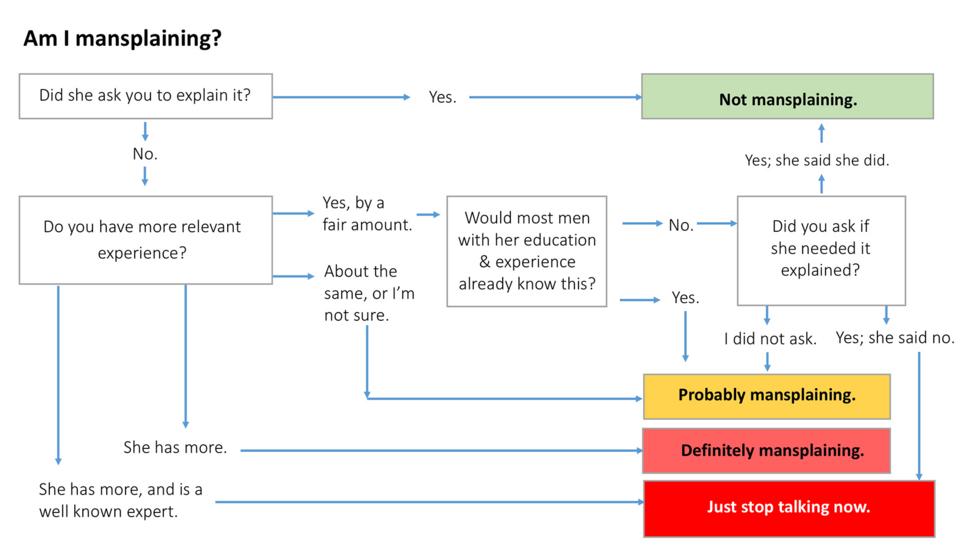 By Kim Goodwin 29th July 2018
Kim Goodwin was asked to help some colleagues tell if they were being helpful or condescending. So she created a simple chart – which went unexpectedly viral.
T

Two male colleagues recently asked me, unprompted, “How do I know if I’m mansplaining?” Both are experts who are often asked to explain concepts to colleagues outside their fields. Both were concerned about those explanations being taken the wrong way. I wondered: Is it really so hard to tell the difference between condescending or simply explaining-while-male?

Thousands of female-appearing Twitter users started sharing the post, asking to print it on business cards or staple it to the foreheads of men

When people (almost always men) explain the product design methods in my own book to me, I say I’m well-acquainted with them, mentally roll my eyes, and move on. I hadn’t developed a succinct explanation for what distinguishes mansplaining, so I spent a few minutes drafting a diagram, as I often do to examine or explain ideas in my work. I realised the “-splaining” part comes down to three factors:

When yet another colleague brought up his mansplaining worries, I decided to post the diagram on Twitter, where my professional community often discusses communication issues. I was not quite prepared for the viral response—3,300 comments, 50,000 retweets, and 120,000 likes, as of Friday morning. I’ve seen stories on several blogs, and someone even translated it into Serbian.

Thousands of female-appearing Twitter users started sharing the post, asking to print it on business cards or staple it to the foreheads of men. (Some added: asking first is polite behaviour for any gender.) 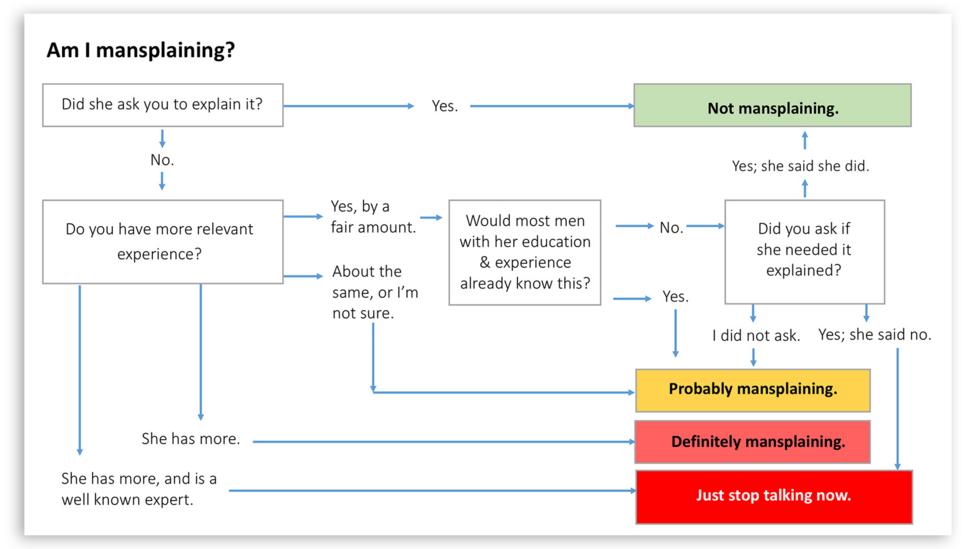 Responses from male-appearing Tweeters were more mixed. Some responded with mansplaining, either explaining sexism to women or asking how women would learn if men didn’t share their knowledge. Many said the diagram was helpful. Others wondered whether this is really a gendered behaviour; a few argued (fairly, I think) that fathers are frequently mum-splained.

Quite a few responses said: men do this to other men too – it’s annoying, but women should just respond as men do. In other words: men agree that men do this a lot, but men aren’t going to change, so women should adopt the “masculine” norm. Interesting assumption.

There was much angst about the m-word: is it sexism in reverse? Sorry, but no.

Some women use this gendered term to express frustration with sexist communication norms, but that doesn’t invalidate the message. A snarky word is also not the equivalent of systemic sexism, which primarily targets women while also limiting the lives of men. And isn’t it odd that nobody gets offended when “mother-henning” behaviour is described as gendered?

Plenty of evidence supports the idea that communication behaviours are often gendered in multiple ways. In school, boys are encouraged to take more air time. Adult men then talk much more in groups, which adds to their perceived influence. Women are interrupted more than men, by both men and women, but women rarely interrupt men. Women in senior positions may learn to interrupt, but are likely to be seen as both more rude and less intelligent. Assertive women are called “abrasive” in performance reviews. 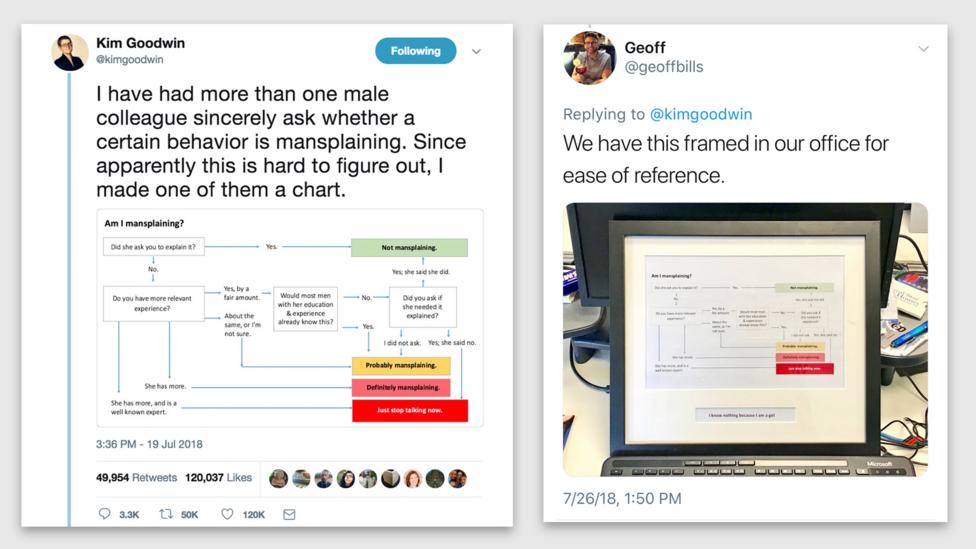 Goodwin's viral Tweet (left) left such an impression, some people even printed it out for reference (Credit: Twitter/Kim Goodwin; Twitter/Geoff Bills)

Although there may be consequences for women who adopt stereotypically masculine communication behaviours, studies show men are rewarded more when they adopt certain “female” behaviors at work. Given that, I think it is fair to ask: if men also find mansplaining counterproductive, why, exactly, should any of us accept it as the norm?

Mansplaining may seem like a trivial issue in isolation, but how we communicate tells other people how much or little they are valued. And in my experience, humans feel better, work more effectively, and behave better when we feel valued ourselves.