The time off typically associated with university-aged adventure seekers is emerging as a popular option for baby boomers looking to shake up routine.

Two years ago Chris Herrmann packed up his life in Perth, Australia, bought a round-the-world ticket and headed off for 12 months. He spent three months enjoying the rhythm of the Spanish city of Valencia, then backpacked through Central and South America, and rounded out his gap year in South East Asia.

It was, he says, a fantastic experience – albeit one he’d never planned. His wife of 40 years had died the year before and taking time to travel felt like the right choice. “It struck me how temporary life can be. Her journey finished but mine was still continuing,” he says. “I wanted to be challenged, just to see what came up.”

With any experience where you step outside your comfort zone, the next step becomes less challenging – Chris Herrmann

In Valencia, Herrmann, now 64, stayed in an apartment and found friends and activities through online meet-up groups. Once he began backpacking he stayed in hostels, generally with a much younger crowd.

Sharing with young people was a bit daunting, he admits. But the former businessman found himself inspired by the younger generation – their confidence as travellers and cultural curiosity. And it was conversations, more than sights, that made their mark. In Guatemala, Herrmann heard locals sharing their views on the civil war. On a boat from Colombia to Panama, young passengers flipped his perspective on drug legalisation by the time he reached port.

He found the whole experience energising. “I think with any experience where you step outside your comfort zone, the next step becomes less challenging,” he says. 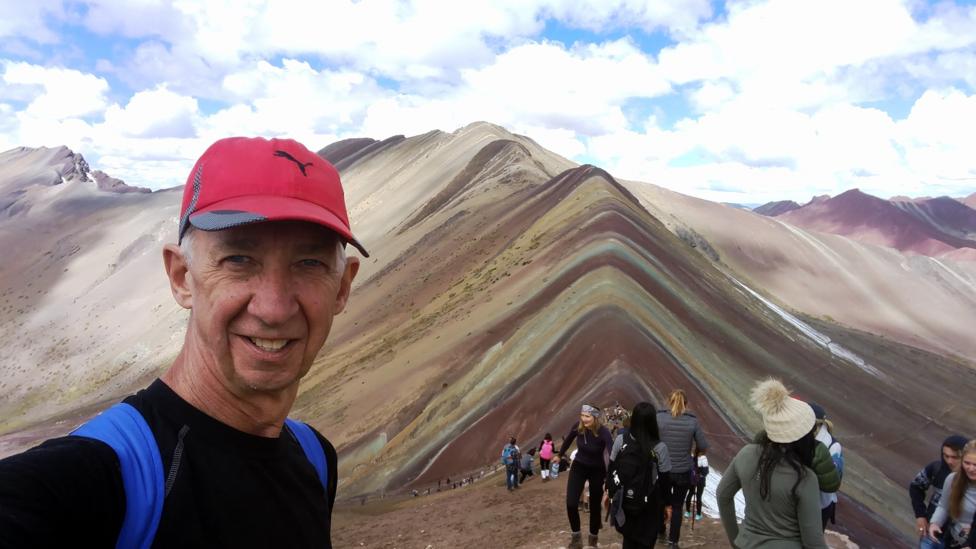 Chris Herrmann, 64, packed up his life in Perth, Australia, and ventured out on a 'golden' gap year. Backpacking in Peru was one of the highlights (Credit: Chris Herrmann)

Making green from the golden gap

Traditionally, students mainly take gap years, often combining travel, volunteering and temporary work. Gap years manifest slightly differently across nations: in the UK most take gap years between school and university, whereas in Australia and New Zealand some people wait until after university.

In the US, gap years are less common and more structured – students tend to seek out formal internships and volunteering programmes. But the aim is broadly the same – to explore new, valuable life experiences to aid the transition into whatever comes next.

As baby boomers have begun rewriting the book on retirement, the idea of a gap year for later life has emerged

As baby boomers have begun rewriting the book on retirement, however, the idea of a gap year for later life has emerged. Advice for seniors abounds on retirement websites and financial service, travel and insurance providers offering best practise for spending and top travel options.

It is difficult to quantify just how popular the ‘golden’ gap year is globally – but there is certainly money to be made. Research group Mintel estimated the size of the global gap industry at £5bn ($6.6bn) in 2005 and predicted it would hit £11bn by 2010. No new figures have emerged since then and that’s partly, says Will Jones, managing editor of UK-based Gapyear.com, because of how broadly the gap concept is interpreted.

“The term 'gap year' [is]… used as an umbrella description for practically any kind of trip that exceeds the bounds of a typical holiday, and any kind of time out from whatever your normal day-to-day life involves,” Jones says. “This makes trying to determine the size of the industry tricky: a gap year means so many different things to so many different people and doesn't always involve plane tickets.”

Recent data, however, continues to show a clear appetite among the older demographic to pick up and travel – whatever they may call it. Researchers from Charter Savings Bank found that 40% of workers they surveyed in the UK wanted to take a later-life gap year or extended trip once they hit retirement. In 2016, Australian researchers found that 77% of seniors were seeking different types of holidays, with “more active”, “more distant”, “more sociable” and “more adventurous” in the top slots (nearly half of these respondents were either retired or transitioning into retirement).

Baby boomers created youth culture, and have the sense that there’s no upper age limit on it

Packaging boomers’ travel aspirations as a gap year taps into an “idealisation of youth” that can be appealing, says Paul Higgs, a professor in the sociology of ageing at University College London. Baby boomers created youth culture, he adds, and have the sense that there’s no upper age limit on it. “What you’re really seeing is the marketisation or the projection of ­another aspect of youth culture into later life.”

A silver spin on tradition

Chris Herrmann’s odyssey may have followed a fairly ‘traditional’ gap year blueprint, but the advantages of seniority – more time, savings and skills – can allow older travellers to put their own later-life twists on the gap year.

Prue and Steve Wright, a couple in their mid-60s from Sydney, took advantage of their highly transportable jobs (clinical psychologist and teacher) and Prue’s British passport to work while they were away. The couple rented a flat in south-west London, found jobs and flew off somewhere every other weekend. 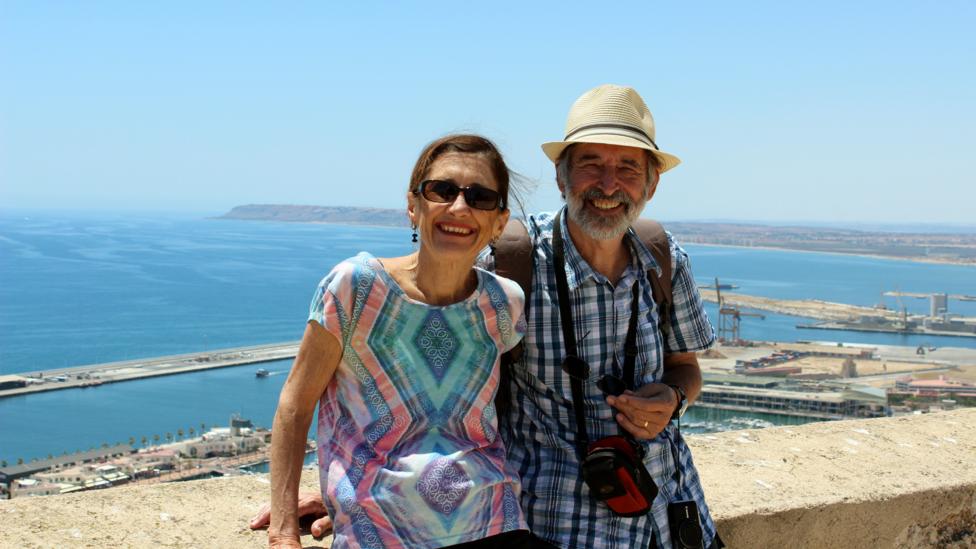 Their trip was meant to last six months but ended up being nearly two years. They dipped into their savings to fund some parts of their trip but not excessively. “I think you have to plan financially how you’re going to afford such a trip, and we were just lucky we had jobs that paid fairly well,” she says.

Shorter breaks can be a better fit for some.

Holly Bull of the Center for Interim Programs, a gap year consultancy, connects grey gappers in the US with programmes lasting from a few weeks to a few months. She prefers to use the phrase “gap time” – it more accurately describes what her older clients are doing. These short gap stints appeal to her clientele in their 50s and 60s, she says. Some may have a spouse who hasn’t retired or maybe they can’t afford to take a big stretch of time. Few take a full year and some space out gap experiences, choosing to do one a year.

One advantage, Bull says, is that slices of gap time allow people to try out different activities to see whether they want to pursue them in retirement. “[Short gap stints] are a great way to make that transition – it can give people a stepping stone towards finding something that really lights them up,” she says.

Bull worked with Mark Schmitt, 56, when he decided to take eight months off. A married father of three employed by a global business, he’d been working since the age of 22. But his youngest daughter had just finished university, he’d come off five profitable-but-tough years at work and his father had died. “I needed a break and the timing was good,” he says.

Since his break began in March he’s hiked in the Pacific Northwest, visited Germany and Tanzania, volunteered at a Scottish castle and rock-climbed with an Outward Bound group. After Hurricane Florence hit the Carolinas, Schmitt also spent two weeks as a Red Cross volunteer, in a group comprising 80% retirees. He met a former bank CEO who combined volunteering with giving boat tours on the Mississippi and a retired admiral who did several volunteer deployments a year. “It gave me an opportunity to see what was being done – a bit of out-of-the-box thinking on what you do with a purposeful life,” he says.

The other side of the gap

Post-gap, Schmitt plans to return to work, though likely in a less intense role. He says the time off has helped him “think more broadly”. One big priority of his gap stint, says Schmitt, was to spend time with family and friends. But the other was to “really give me ideas for how I might live my next 30 years”.

Herrmann, the Australian who travelled the world, developed a new passion during his gap year, starting with a blog about his travels. The blog turned into a book, My Senior Gap Year, published earlier this year.

He’s also working on an online service that will advise people who want to “live like a local”, as he did in Valencia, as well as include general information about independent travel for seniors. While it’s in the early stages, he believes there is demand and wants to let older people know they have options beyond cruise ships and package holidays, and to help address concerns they might have about choosing a gap year.

“I had all these fears, almost 100 reasons why I shouldn’t do a gap year. ‘I’m too old, I’m travelling alone.’ But this time the gut feeling just said, ‘Shut up, get on and go’.”