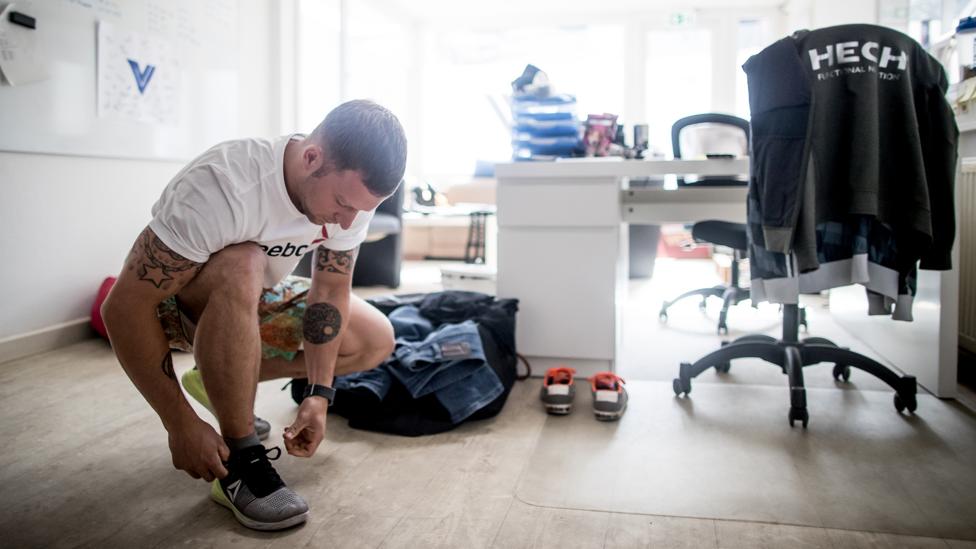 By Bryan Lufkin 17th January 2019
There are health and cognitive benefits of working out while you're on the clock that could help you feel better, look better and perform better.

Sometimes, the difference between a productive day and time wasted can come down to an hour: an hour’s extra sleep, an hour’s exercise, or an hour’s deep work can have a profoundly positive impact on how you work and live. This January, we’re looking at ways to have a more productive year in a new series called Power of an Hour.

Exercise. We all know we need it. Many of us dread it. And nearly all of us struggle to find time to do it.

Unlike sleeping, exercise isn’t necessarily something that’s going to happen to us every day. We have to actively find time to fit it in. And many people are finding ways to do it during the activity that takes up most of their day: work.

Exercise during the day and you’ll look better, feel better and even work better. These benefits have long been known.

Researchers conducting a 2008 study in the UK found that that more than 200 employees who had access to and used a company gym were more productive during the day, and went home feeling more satisfied on the days they exercised during regular work hours.

In 2013, another study showed that regardless of age, people experience “immediate benefits” for cognition following “a single bout of moderate exercise”, such as 15 minutes of moderately intense cycling on a stationary bike. These findings suggest that working out during the day could be even better than bookending gym time before or after the office.

That’s on top of all the regular benefits to physical activity, including weight loss, better sleep, better sex, better mood and keeping diseases at bay. 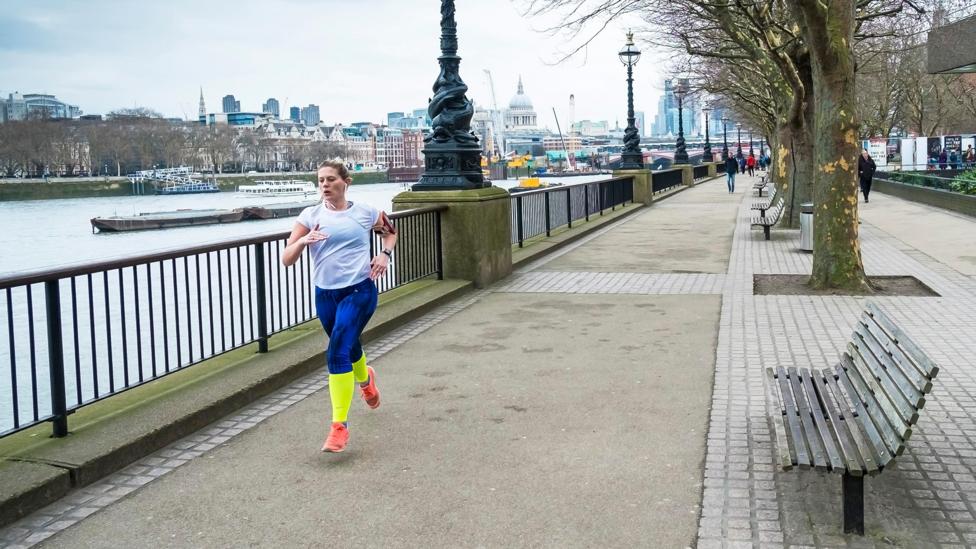 Squeezing in a jog or walk around the block during your break is one way of tacking on exercise during the day (Credit: Alamy Stock Photo)

Peter Antonio, a personal trainer, fitness instructor and registered nutritionist at the University of Birmingham Sport, the physical fitness arm of the UK university, calls ducking out of work during your lunch break to exercise a “golden opportunity”.

Not only does it help his clients’ over-arching fitness goals, but it “gives you a mid-day sense of accomplishment which can last for the remainder of the day”, he says. Antonio adds that clients who exercise during the day find they get more work done and take fewer sick days. Plus, it’s good for mental health, providing a stress-free getaway from the daily typhoon of meetings and emails.

Some people make a similar argument to preserve break time and physical education at primary and secondary schools. Research there, too, suggests that taking a break from repetitive tasks and getting away from the classroom grind helps pupils pay attention and perform better.

But the personal perks are just the beginning. Workday exercise could also provide benefits on a more macro level.

There’s been discussion among health organisations and business leaders around whether we should make exercise compulsory at work to fight bigger societal health problems that filter into the workplace. More than 20 million people in the UK, for instance, are physically inactive, which costs the National Health Service £1.2bn ($1.5bn) a year, according to the British Heart Foundation.

In it, he called for on-the-clock exercise that’s implemented from the top. After all, he says, it’s hard to maintain a robust team if people are dying of preventable heart diseases, cancers and respiratory afflictions because they’re out of shape. 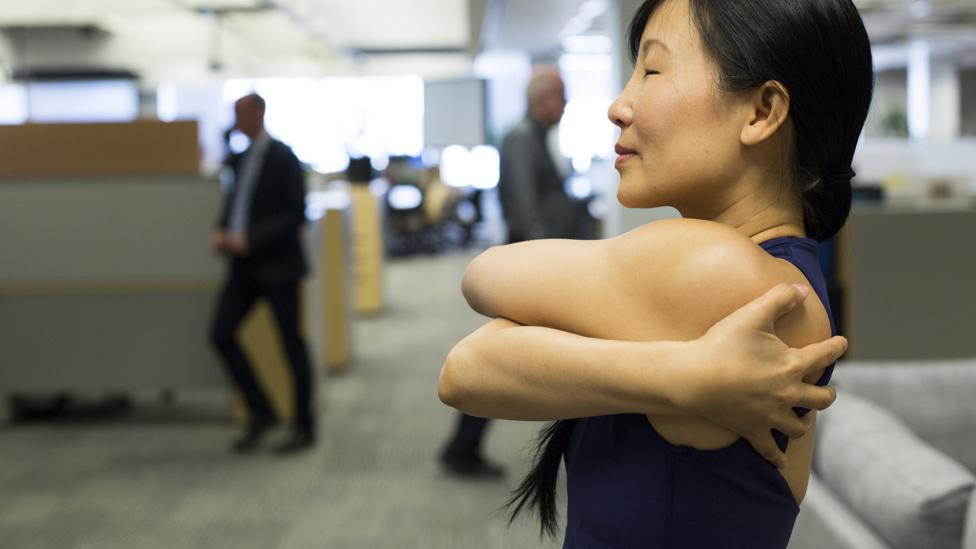 How to do it

Christian Allen lives in Boston, Massachusetts, and runs a start-up that provides companies with customer service tools. He says his preferred time to lift weights, do yoga or run is during the work day. But finding groups of like-minded people who prioritise fitness breaks during working hours has made it easier.

“I can say without reservation that I’ve always felt happier and healthier during my 19 years at a desk job when I’ve been working out regularly,” he says.

For the last six years, he’s organised a group through the website Meetup that gathers at noon every weekday for a game of football. He got the idea during one lunch break at his old job, when he stumbled across a group playing midday soccer.

“At the time, I was running a few days a week at lunch with some co-workers, but I liked the idea of mixing something completely different into that routine.”

Allen’s not alone. Workplaces are increasingly changing in a way that might make a lunch-hour workout more feasible for many of us.

More companies are offering gyms on office premises. Some gyms themselves are attaching workspaces onto their main facilities. Luxury gym chain Equinox is one example, offering big tables and juice bars that lure remote workers and freelancers to set up laptops in sight of treadmills and elliptical machines. Some start-up companies are even setting up shop in these spaces as their main offices.

Still, what if you can’t afford to take a whole hour (or more) off? That’s okay – experts say there are smaller ways of weaving exercise into your day, and you don’t need a fancy office fitness centre either.

“Whether it’s five minutes or an hour of movement, there are real health benefits to any type of activity during the work day,” says Sandy Todd Webster, editor-in-chief of IDEA Health & Fitness Association, a San Diego-based organisation that connects more than 14,000 personal trainers and fitness professionals around the world. “If you are able to walk or power yourself forward by some means, do it. You don’t need a gym. Movement opportunities are everywhere,” she says. 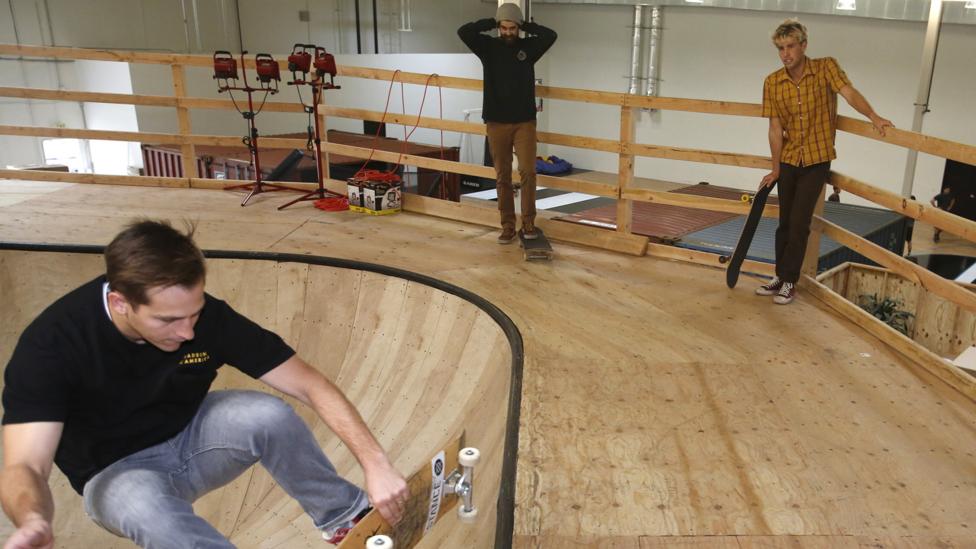 “Keep a pair of athletic shoes and socks at work and just get out there and move on your breaks or whenever you can get away for five, 10 or 20 minutes,” adds Todd Webster. “If you work in a building with stairs, always use the stairs or take a longer route to your office. It all adds up.”

No matter what your individual goals or office circumstances, experts say getting an hour’s exercise during the day should be viewed with the same importance as a work meeting.

“The key is to schedule the time,” says Todd Webster. “Literally write the workout into your calendar – and then hold that appointment as sacred.”

Still, all this can be easier said than done. And not just because some bosses may be inflexible or you might not have access to a much-needed post-gym shower.

Some jobs make it hard to be away from your desk. (This might be one of the many reasons why remote working is up in recent years.) Allen says he’s been lucky to work at places that promote work-life balance, but it hasn’t always been easy. Erratic work schedules can wreak havoc on exercise breaks, and there’s also the potential impact on colleagues.

“I’ve always worked as part of a team,” he says, so he’s needed to be cognisant of how leaving for a brief workout might affect his colleagues’ workload. “I’ve also needed to consider whether or not teammates who don’t take advantage of those policies feel jealous or annoyed that I am.”

But he says that shouldn’t scare you away from making physical activity a priority. “All of those are just reasons to be more communicative about what you are doing and why it’s important to you,” he says.