Loading
Workplace
Office Space turns 20: How the film changed the way we work
Share using EmailShare on TwitterShare on FacebookShare on Linkedin 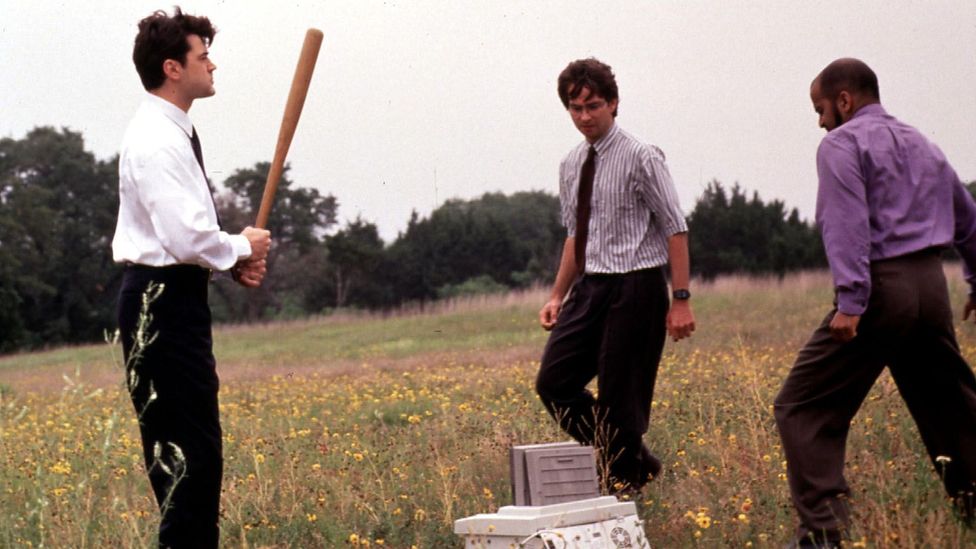 By Bryan Lufkin 6th February 2019
In 1999, the film masterfully spoofed how office life could be simultaneously mundane and ridiculous. What's different today?
O

Office Space is the definitive film that skewers corporate banality. As it turns 20 this month, re-watching it reveals how much office culture has changed – and how much it hasn’t.

The film, directed and written by Mike Judge, follows Peter Gibbons (Ron Livingston), a young software engineer at the generically named firm Initech. He’s underpaid, undermined and frustrated, and his job dissatisfaction eventually spurs him to lead a rebellion against his supervisors and corporate America.

The revolt culminates in a cathartic smashing of a widely-despised office printer in the middle of a field with his colleagues, followed by an attempt to steal hundreds of thousands of dollars from the company by hacking into its bank accounts with a computer virus.

The film’s message – summed up near the end by Peter’s girlfriend, Joanna (Jennifer Aniston), who also hates her waitressing job – is clear: “Peter, most people don’t like their jobs. But you go out there and you find something that makes you happy.”

Since Office Space was released in 1999, we’ve grown more aware of the absurd and dreaded aspects of office life. But how successful have we actually been in stamping them out? And do we have Office Space to thank? 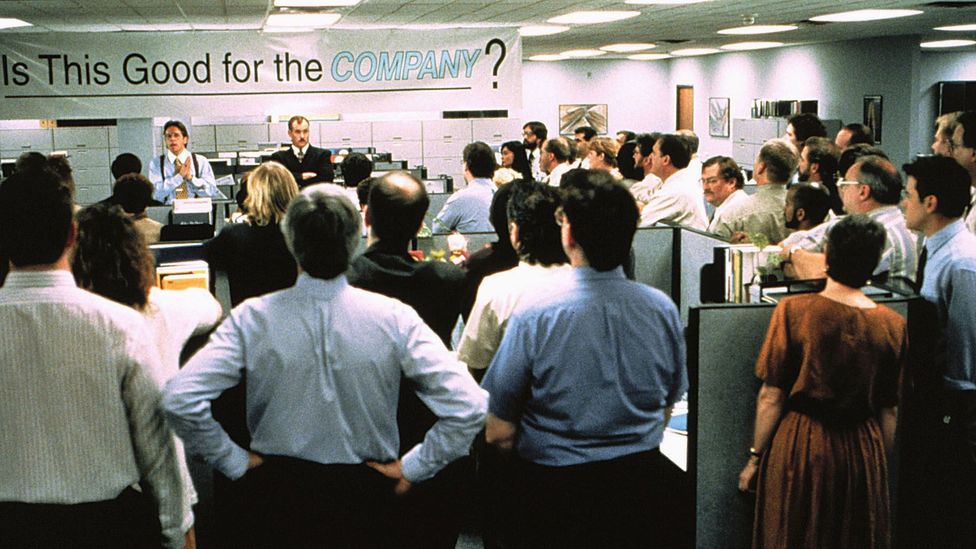 What’s changed about the world of work?

In the past few decades, white-collar office parodies have grown into their own genre within pop culture.

Scott Adams’ comic strip Dilbert launched in 1989, and in 2001 the BBC brought out the original version of the TV comedy The Office. Both roasted elements of the modern workplace: inept managers, mind-numbing bureaucracy, forced office parties, repetitive busywork and jargon-filled memos read by none.

Office Space rebuked this way of working – one that favoured conformity and the bottom line above all else, and that led to physical and intellectual monotony. Within that context, it’s easy to see how many of today’s companies responded with things like standing desks, on-site meditation and yoga rooms, or bring-your-dog-to-work day.

The film’s best representation of the work culture that we now try to avoid is Peter’s coffee-swigging boss, Bill Lumbergh (Gary Cole). With his gold-rimmed glasses and paisley tie, Lumbergh looks like an executive holdover from the “greed is good” era of the 1980s. He micromanages and remains oblivious to the wellbeing and concerns of his subordinates, at one point leaving Peter 17 messages on his answering machine on a Saturday morning nagging him to come to work.

This leads Peter to his breaking point and to an epiphany as he sees a hypnotherapist: he decides to stop caring altogether. He’s done. He starts arriving late, ditches the tie and trousers for T-shirts and sandals, openly plays Tetris at his desk and dismantles his cubicle with a power drill.

Surprisingly, this new attitude is exactly what catches the eye of two external consultants, Bob and Bob (John C. McGinley and Paul Wilson), brought in to weed out redundancies at Initech. They lay waste to many of Peter’s colleagues but the Bobs deem Peter’s blasé behaviour a breath of fresh air, dubbing him “upper management material”. 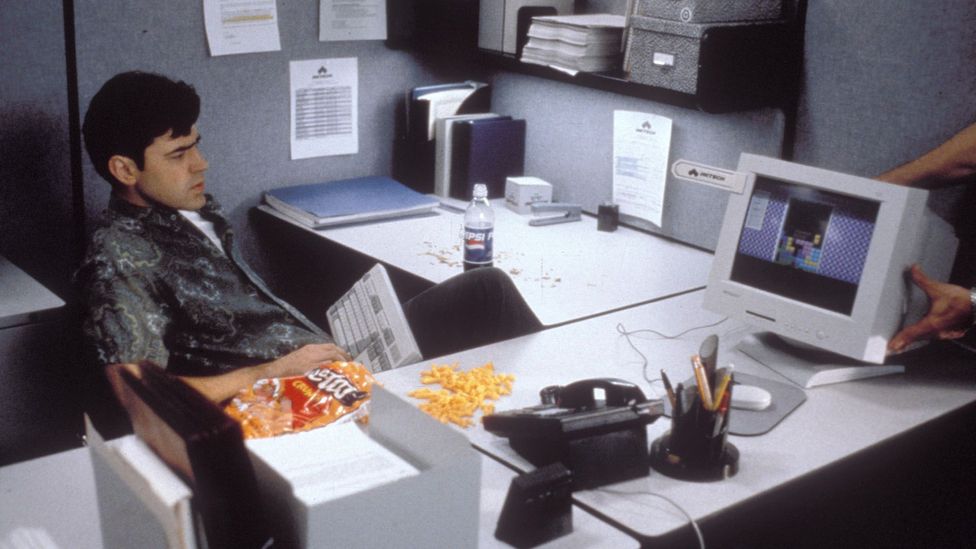 Peter (Ron Livingston) goes on to rebel against his toxic boss, eating Cheetos and playing Tetris at his desk in street clothes (Credit: Alamy Stock Photo)

In this way, the film is weirdly prescient. Today, scores of tech CEOs take a page out of Peter’s book. Silicon Valley start-ups of the late 2000s and early 2010s come to mind, with leaders who shunned suits and called for freedom and creativity in the workplace. Instead of personality-stripping cubicles, organisations would go on to favour open-air office plans with bean bags and ping-pong tables. Business luminaries like Mark Zuckerberg performatively eschew dress shirts and ties for hoodies and jeans, kind of like Peter does in Office Space.

The film is weirdly prescient

But it’s more than just clothes. Zuckerberg and his ilk represent the disruption and emergency exit from office drudgery that the characters openly covet. Years later, that disdain for corporate life, along with new technologies, paved the way in the actual workforce for the gig economy and more opportunities to be your own boss.

There’s a downside, though. While that new way of work has freed many from cubicle farms, it’s also spawned a “hustle culture” that pushes entrepreneurs and independent workers to inflict burnout on themselves, rather than have an ever-present boss like Lumbergh do it for them.

In that way, many of the problems Office Space addresses still exist today, just in different form.

What hasn’t changed at all?

Much of the commentary in the film still holds true, suggesting that there are timeless problems that ensnare office workers.

Some of the “solutions” to office ennui we’ve come up with can be seen as artificial, like the pinball machines or foosball tables that have come to symbolise stereotypical start-ups. At this point, they’re often just as company-mandated and hollow as the forcibly frivolous “Hawaiian-shirt Fridays” mentioned in the film. Unless HR and management actually implement policies to promote flexibility, they’re empty gestures.

And no matter how casual the dress code or how many on-site play areas there are, many of today’s firms still fall victim to the damaging “company first” directive that’s mocked in Office Space.

Recent reports have suggested some Facebook employees view the company culture as “cult-like”, despite its historically un-corporate values. Tesla CEO Elon Musk drew criticism last year when he tweeted that nobody changed the world working a mere 40 hours a week – arguably taking the call for higher purpose that’s absent in an Office Space-like working environment and then weaponising it to encourage people to overwork. 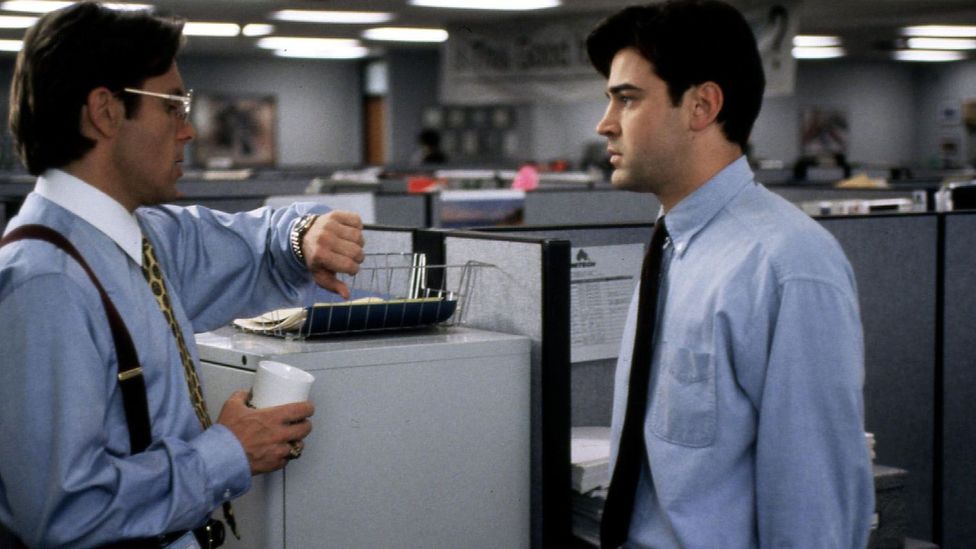 There are also other management issues highlighted by the film that still exist. For example, one of the Bobs tells a group of white managers that he wants to fire Peter’s colleague Samir Nagheenanajar (Ajay Naidu). He keeps stumbling over the pronunciation of Samir’s last name, eventually landing on “Not-gonna-work-here-anymore”, as his colleagues snicker. Today, while companies large and small tout attempts at greater diversity and inclusivity, microaggressive, casual racism like this still persists in the workplace.

Later, the Bobs say they aren’t going to tell the employees who’ve been made redundant to their faces, saying: “We like to avoid confrontation whenever possible.” Avoiding uncomfortable in-person discussions today is easier than ever, thanks to technology – in the years since Office Space, firms have been criticised for notifying laid off employees via email or by voicemail, text or tweet.

Anger toward corporations, like the kind that motivates Peter and his friends, remains intact today, too. In the film’s climax, Peter and his friends lead a hacker heist to drain money from the Initech bank accounts so that they “never have to sit in a cubicle again”. They’re willing to break the law to take down a company they view as corrupt and unfair. Similar scenes have played out in recent media – not as comedic sequences but as earnest indictments on capitalism and the 1%, as seen in current hit shows like Mr. Robot.

While Office Space had disappointing box office numbers, it became a cult hit over two decades. And a lot has happened in those 20 years, including a global financial crisis that makes the dull jobs in Office Space seem like luxuries white-collar workers took for granted.

Watching it in 2019, it’s easy to spot what we’ve reacted to and attempted to change, even if some changes ended up being superficial. Still, the film’s central theme raises a question – can you really find a job you love? – that promotes important discussions about work-life balance and rewarding careers we continue to have today. We’ll probably be having them as long as jobs exist.

At the end of the film, when Initech shuts down after someone sets fire to the building, Peter becomes a construction worker. As he’s shoveling his old company’s ashes, he tells us his new job “isn’t so bad: making bucks, getting exercise, working outside”. Fortunately for him, his attempted crime fizzled in the end and he learned his valuable protagonist lesson as Initech got its comeuppance anyway.

But as a piece of commentary, the film’s damning portrayal of bad management and inefficient workplaces holds up today. Office Space reminds us that while no job is perfect, scrutinising the imperfections is always worthwhile.