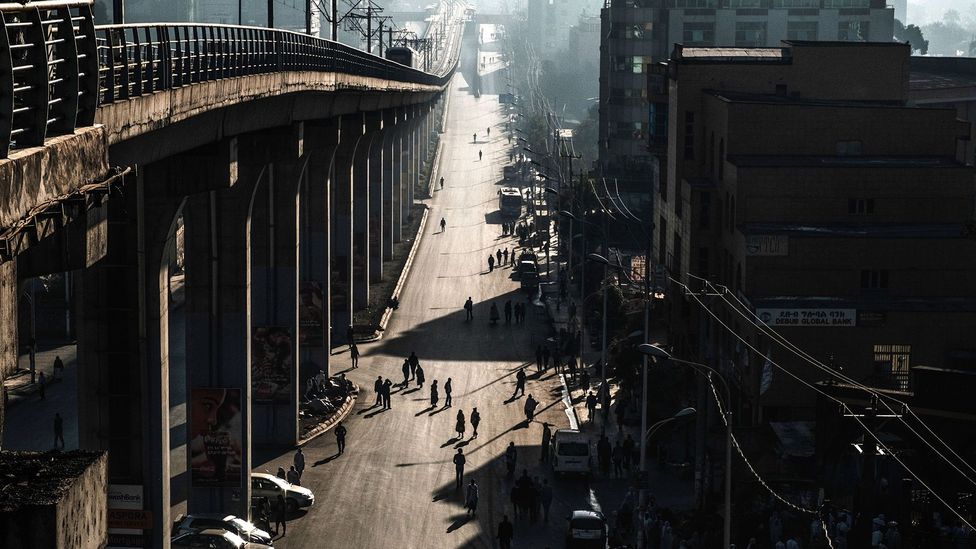 By Thomas Lewton 18th March 2019
Talented young tech workers want to transform Ethiopia by finding unique solutions to local problems – and with a new prime minister, now may be their time.

“I am young, ambitious and ready to transform my country, Ethiopia,” Selam Wondim announces to a conference room packed with high-profile executives and politicians in one of Addis Ababa’s most prestigious hotels.

The 29-year old tech entrepreneur has been invited to speak to delegates at a side event of the 32nd African Union Summit, where she hopes to persuade governments across the continent to support technology ecosystems. We need “safe places for us to experiment, fail and succeed in this start-up game,” she says.

Here in Ethiopia, she has a receptive audience. Last year Abiy Ahmed, 42, was elected prime minster and quickly made his mark with a series of sweeping reforms, including the release of thousands of political prisoners and the restoration of diplomatic relations with Eritrea.

Also among his policies are changes to business, finance, telecoms and education, signalling that technology is now a priority for the government. With this in mind, Wondim and others believe that Addis Ababa could soon become one of Africa’s leading innovation centres, potentially rivalling Nairobi, Lagos or Cape Town. 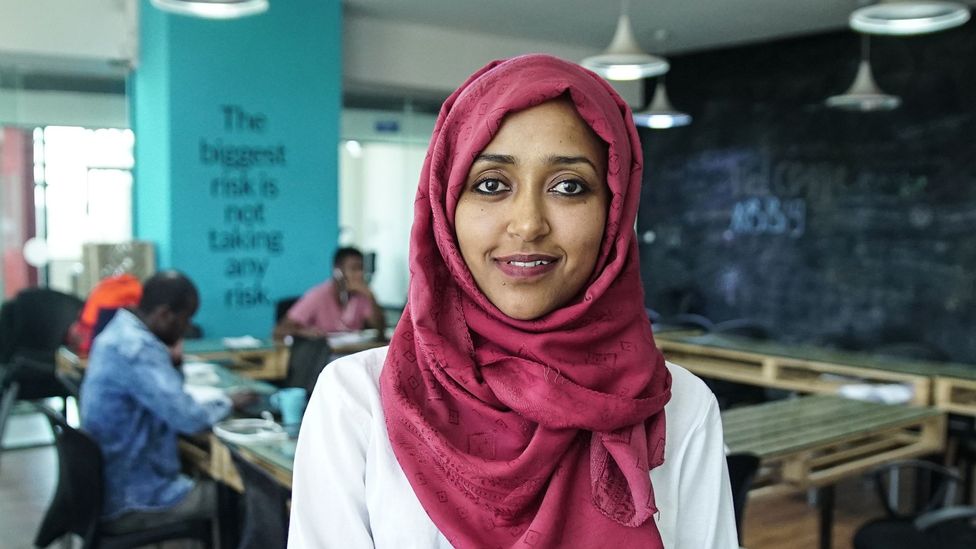 Half of Africa’s tech hubs are found in only four countries: Kenya, Nigeria, South Africa and Ghana. These same countries account for three quarters of the funds raised by start-ups – funds which are rising rapidly as investors are drawn to the continent. In 2018 alone there was a four-fold increase in start-up funding compared to the previous year.

Wondim wants Ethiopia – and her own start-up GroHydro, which manufactures hydroponic farming systems – to be part of this growth. GroHydro is based out of blueMoon, one of several incubation centres found in Addis Ababa’s Bole district.

blueMoon looks like tech hubs and incubators around the world – inspirational quotes adorn the walls of co-working spaces (“Stay hungry, stay foolish” or “#daretodisrupt”), bean-bags abound and a bright blue auto rickshaw is inexplicably nestled in the corner of one room, eight floors above street level.

But behind the aesthetic lies an unusual outlook on what sort of problems technology should be solving. “In developed countries technology is creating a comfort or a convenience, whereas in Ethiopia it’s creating a necessity,” says Betelhem Dessie, a tech educator at iCog Labs, the country’s leading artificial intelligence hub.

Despite two decades of sustained and substantial economic growth, Ethiopia still has one of the lowest GDPs per capita in the world and most people are subsistence farmers. Now young Ethiopians are turning to technology to tackle the challenges they face. “Great ideas are essentially solutions to problems,” says Eleni Gabre-Madhin, blueMoon’s founder. “And if anything we have a lot of problems.” 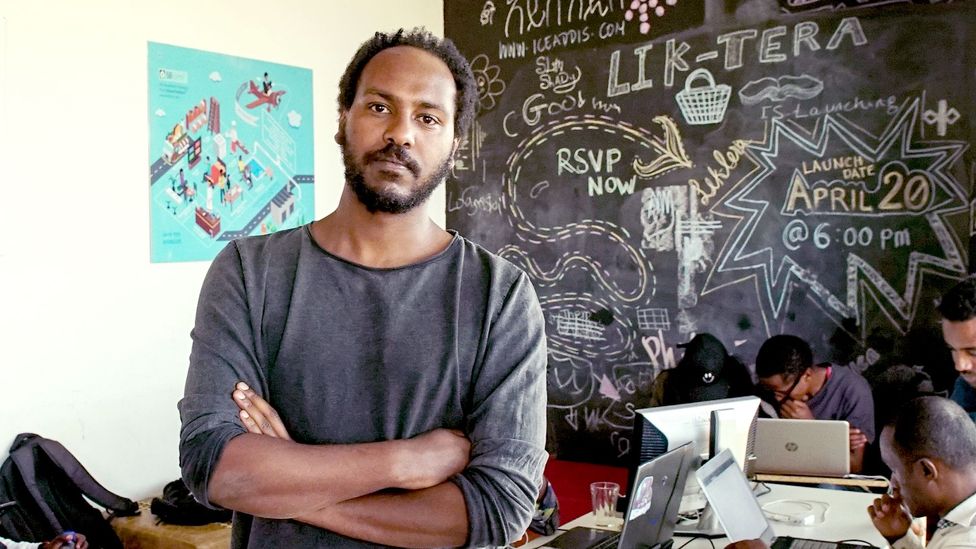 Markos Lemma cofounded the first start-up of its kind in 2011, iceaddis; it's now one of nearly 100 in Addis Ababa.(Credit: Thomas Lewton)

Gabre-Madhin offers M-Pesa – a mobile banking company based in Kenya – as an example of how technology can uniquely transform developing economies. “Because there wasn’t bricks and mortar banking set up, we didn’t have legacy systems that had to be dismantled to go to mobile banking,” she says. Agriculture, education and healthcare systems are ripe for such technological “leapfrogging” too.

One Ethiopian example is Flowius, a start-up taking a radical approach to building affordable water pipelines by using mobile surveying tools, solar power and microfinance. “There are so many people who walk for water,” says Markos Lemma, co-founder of Flowius. “We want innovation that contextually makes sense. Finding local solutions for local problems, instead of adopting solutions all the time.”

Lemma is also the co-founder of iceaddis, another innovation hub down the road from blueMoon set up in 2011 as the first of its kind in Addis Ababa. In recent years he’s seen young Ethiopians’ interest in technology blossom. “It’s crazy!” he exclaims, looking out over Bole’s bustling streets. “It feels like it’s happening right now. It’s opening up.”

In less than a decade, around 100 start-ups have emerged out of Addis Ababa’s nascent tech ecosystem. Every day Lemma receives several meeting requests from technology enthusiasts, asking for advice on how to bring their product to market. He believes a dramatic rise in internet access is a major factor in this change – increasing from 1% of individuals using the internet in 2011 to more than 15% today. The expansion of mobile phone networks, alongside falling smartphone prices, have led to a similar increase in internet users across sub-Saharan Africa. “When more people are connected to the internet, they know what is out there,” he says. “It creates a lot of excitement and motivation.”

Wondim and her hydroponics start-up are a case in point. “Before I applied to blueMoon, I used to experiment watching YouTube and I came across this technology. I was really surprised that we can grow crops without soil,” she says. Taking this existing technology, Wondim then created a new business model – one moulded to Ethiopian society. 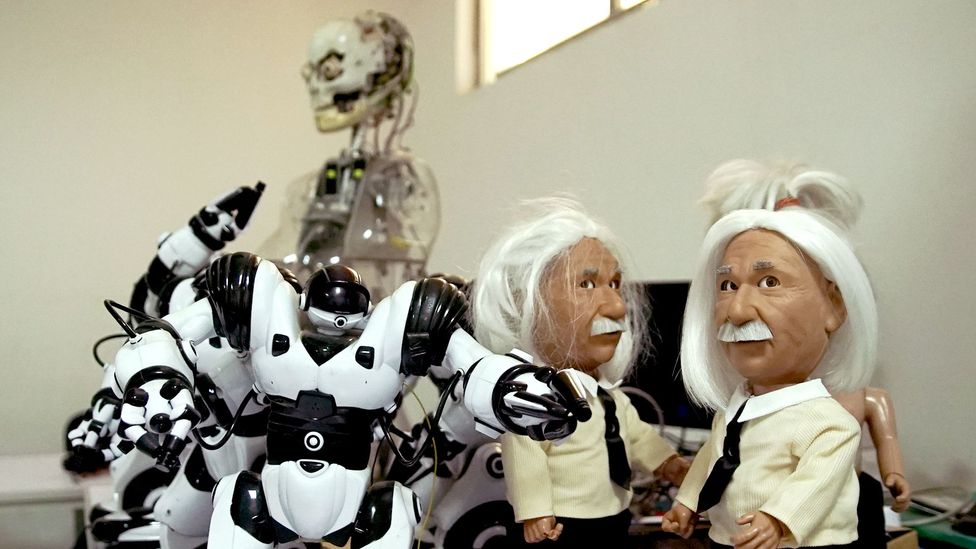 The aim of start-ups like blueMoon and Flowius is to tackle local problems with local solutions (Credit: Thomas Lewton)

“The youth think that agriculture and farming is outdated, and are even abandoning their parents’ and grandparents’ land,” she explains. “If we make it more high-tech, we can promote the youth into that business.” GroHydro systems are also being designed for refugees in Ethiopia’s urban centres who are often marginalised. Not only does this empower refugees with an income, but Wondim hopes that through business a dialogue will be created between refugees and Ethiopians. “We need to start some kind of engagement,” she says.

Ethiopia’s society is highly communal. Injera – a traditional flatbread eaten with most meals – is always shared from the same plate, while coffee is drunk together several times a day. Such social norms influence the tech solutions being developed in Addis Ababa.

Lemma points to a traditional crowd-saving practice – called Equb – in which family members and friends regularly put money into a shared pot, and then wait their turn for the dividends. Recently this Ethiopian custom has been digitised into a mobile app. “You wouldn’t think about this in another market, unless you had that culture,” he says.

While Addis Ababa is teeming with innovative ideas like these, turning them into marketable products is an uphill struggle. For decades, Ethiopia’s business environment has remained conservative and bureaucratic. “Commercialisation for any business here is hard, but if you’re looking at tech innovation, it’s way harder,” says Lemma. The procedure to open or close a new business is lengthy and expensive – the antithesis of the start-up model.

Yet Abiy has indicated reforms are on the horizon. In December, he launched the ‘Doing Business Initiative’, which aims to lower the regulatory and administrative hurdles for businesses and promote investment.

Foreign investment in Ethiopia is currently tightly controlled, hampering many of its budding start-ups. On a chalkboard scrawled with aspirations at blueMoon there is one common thread: “I want to meet investors”.

And while internet access has leapt in recent years, the telecoms sector – which state-owned Ethio Telecom has a monopoly on – is notoriously expensive and unreliable. Under the previous government, nationwide internet blackouts were common as the state shut down communications in the face of widespread protests and ethnic violence.

Internet blackouts are a thing of the past since Abiy came to power. He’s also opening up to foreign investment, with Ethio Telecom set to be partially privatised and split into two competing businesses as a first step. In February, he told the Financial Times: “My economic model is capitalism.”

Yet the rapid liberalisation of Ethiopia’s economy carries with it the risk of neo-colonialism. Getnet Assefa, the co-founder of iCog Labs and an ardent support of many of Abiy’s reforms notes that most of the technology companies in Kenya and Nigeria are foreign-owned. “Yes, they have a lot of investment,” he says. “But if you look at it in terms of homegrown tech, Ethiopia is doing reasonably well.” Assefa believes the government must tread a line between encouraging foreign investment and fostering the growth of Ethiopian tech companies.

In July, Abiy met with Sophia the Robot, who was partly built at iCog Labs. “We programmed Sophia to speak a small amount of Amharic for the prime minister,” says Assefa. As much as Abiy’s appearance was a publicity stunt, it signalled his commitment to the technology sector. “People are now seeing Ethiopia in a different eye, not just poverty and politics,” says Assefa.

Optimism abounds in Addis Ababa’s tech community, but Lemma cautions that many of Abiy’s proposed changes are yet to happen. “I really support his ideas and his ambition,” he says. “But on the flip side, this is all theoretical.”

In the meantime Lemma, Gabre-Madhin and others are nurturing the technology ecosystem themselves. Alongside incubators, they are creating workshops, mentor networks and funding opportunities. “We set out to do something very holistic,” says Gabre-Madhin.

In particular, there’s a need to connect university graduates to this technology ecosystem. In the last two decades, the number of universities in Ethiopia has increased from two to more than 40, while it’s mandatory government policy for 70% of university students to study science and engineering subjects.

“If you nurture this talent and provide a landing for all of this energy and passion, something good is going to come out of it,” says Gabre-Madhin. “The difference between where ideas thrive and where they die is the fertile ground on which they fall.”