Social media is awash with glossy images of our friends having fun – but how does that impact our wallets?

Just weeks before a break to Ireland with her husband, Visage Vijay is deciding whether to make a big purchase during her holiday.

She’s mulling over whether she’s willing to part with $3,000 for her first Chanel handbag, after seeing friends and celebrities with it on Instagram. “I have an obsession with having a Chanel purse, so that’s something I’ll probably get really soon,” the 37-year-old says. “On Instagram, I love handbags.”

This isn’t the first time the Toronto-based drug safety manager has been inspired by Instagram posts to splash out. She spent a similar amount on a Prada handbag on a trip to Italy in 2017. Everything she does – from holidays to fine dining, taking classes to buying clothes – has some link to what she’s seen on the social media platform.

“Even if I see something that I am interested in somewhere else, I have a tendency to check the hashtag on Instagram to see what other people have posted on it,” says Vijay. “It’s not like an advertisement. It’s showing real people doing real things. So I’m just influenced to see and do what they were doing, because it looks like people were enjoying those things.”

But that enjoyment comes at a cost. A recent study from professors at the University of California and University of Toronto says people are spending more and saving less because they only see what others are spending, and not what they are saving and social media has exacerbated this. This creates an inaccurate perception, called a visibility bias, which the researchers suggest is changing our consumption habits. 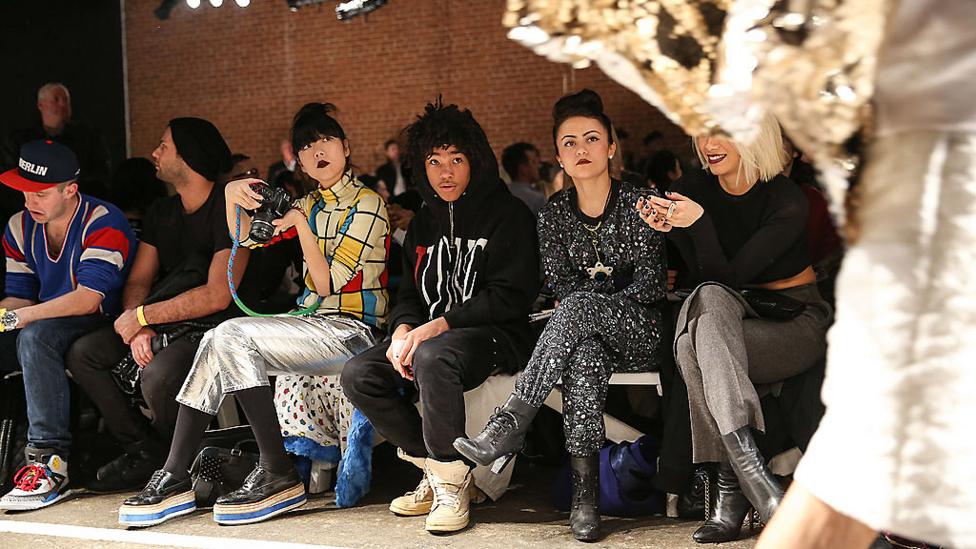 What is a visibility bias?

David Hirshleifer, one of the authors of the study and professor at Merage School of Business, UC Irvine, says visibility bias comes from the way we interact in social settings. People tend to talk about things they are doing, he says, which means we highlight consumption more than non-consumption.

“If I meet a friend in person at their house, then I may see my friend drinking a cheap cup of coffee or wearing inexpensive clothes,” says Hirshleifer. “But if I have a look at [their] social media [account], then my friend may be posting about that expensive restaurant that he went to or the exciting travel.” He says any kind of communication that is not person-to-person will create a greater visibility bias.

Visibility bias has increasingly driven buying trends as ways of keeping in touch became cheaper and more diverse. “The drop in costs of long-distance communication, the rise of cable television and VCR, and subsequently the rise of the internet greatly increased the ability of individuals to observe others’ consumption,” the study says.

Increased awareness of what other people are doing not only makes us spend more, the experts say, but also lures us into incorrect assumptions about our own financial position and future wealth prospects. 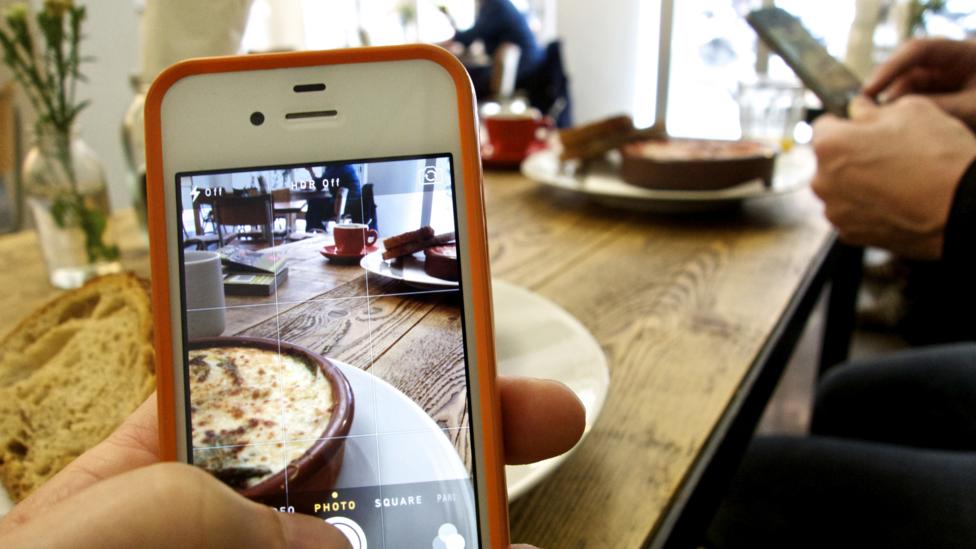 Thanks to social media influencers and a host of foodie bloggers, food has become a clickable status symbol (Credit: Getty Images)

Bing Han, another of the study’s authors and professor at Rotman School of Business, University of Toronto, says when it comes to saving, people take their cue from others in their social network because they perceive their socio-economic situations as similar. “That signal from my peers about what they think about the future, and any income growth, and their resulting actions kind of give me some kind of clue about my future,” he says.

Every time you post about a purchase or an experience on social media, it has the potential to influence those who follow you. “It’s kind of the domino effect triggering other people into doing something. It doesn’t have to be that you feel pressured, it’s just like they learn from your activity, your consumption,” he says. “You have such a belief, and your belief is relevant to them. They kind of adapt similar strategies, similar behaviour.”

The authors say visibility bias has been magnified by social media because the consumption activity is so visible. Stephane Couture, assistant communications professor at Canada’s York University-Glendon, says the promotional culture of social media gives people a platform to showcase their spending.

“The pattern of consumption was there before social media: the idea that if people around us are consuming, we have a tendency to consume more. Usually social media is just amplifying these trends,” Couture says. 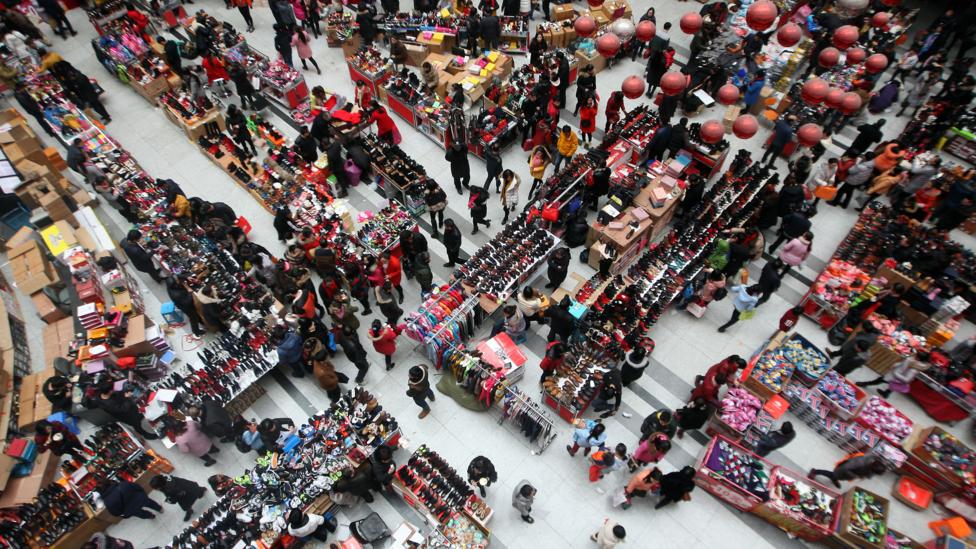 Visibility bias could help unravel why US personal savings, i.e. the amount of disposable income people save, has dropped sharply since the 1980s. (Credit: Getty Images)

The authors of the study say visibility bias could help explain the “puzzle” of why personal savings rates in the US, i.e. the amount of disposable income people save, has dropped since the 1980s. Back then rates stood at around 10%; then they fell to a low of about 3% in 2007. They point to a similar trend in developed OECD countries. The latest US government data says rates hovered between 6%-7% in 2018; even as personal debt continues to rise.

Vijay admits that if she didn’t splash out on a new designer handbag she would likely save the cash, or use it for something more practical like furnishing her new home. “The thought does sometimes cross my mind - that I'm being impractical,” she says. “Our house is a little bit older. So if something needs to be fixed, maybe we have to go into our savings rather than having the money available.”

Toronto-based finance manager Parth Bhowmick believes Instagram makes him spend at least CA$200 ($150 USD) more a month on food, because he ends up eating out four to five times a week. One of his friends runs an Instagram account promoting restaurants.

“Sometimes, I look at his feed and see him at a Chinese place. At the back of my mind, it plants a seed that I haven’t had Chinese food in a while. Maybe I should go and get some,” he says.

The 28-year-old says what began as a search for restaurant ideas has escalated to a habit of dining out several days each week with his girlfriend. He feels he would likely be eating out less if he wasn’t on Instagram and has since tried to reduce the number of restaurants and related accounts that he follows. “I did see that cut down how many times I would have that urge to go out to a restaurant or try that place that I never heard of.”

Still Bhowmick says he’s surprised to see how much he’s spending on eating out. “I think it does accumulate when you look back at the end of the month and you do an inventory of what you spent,” he says. “It does remind me that I could be cooking and not spending as much.” 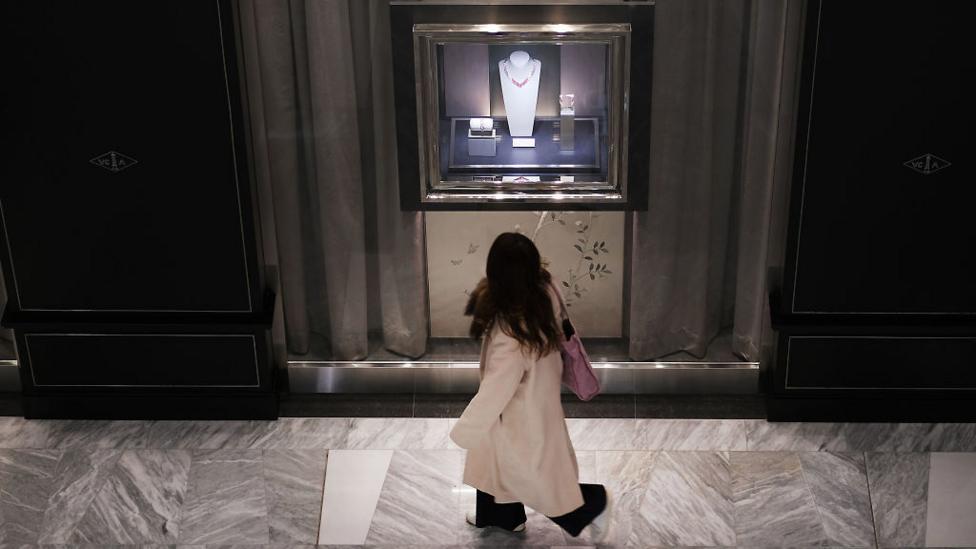 Living in a bubble?

Hirshleifer says one of the study’s objectives was to make people more aware of their spending. “Psychologists have sometimes found that if one becomes aware of a psychological bias, that can reduce the bias,” he says.

Couture says people need to be careful they’re not being fooled by the social media bubble. “The filter bubble is the idea that because of the friends that we select on social media, we create a bubble, so that there’s just this reality that our friends confirm what we already believe in,” he says.

But when it comes to spending and saving, people may need to look beyond that social media “reality”, he adds.