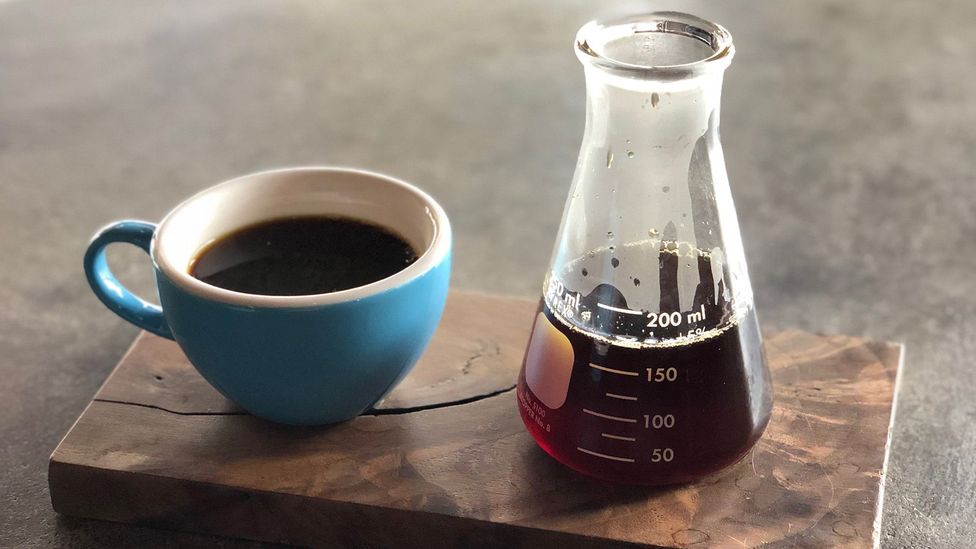 By Alina Dizik 3rd April 2019
A bitter customer service experience for some?
T

Three years ago, when travelling for work, I dropped into a café for a dose of morning caffeine. Sleep deprived, I was grateful to be handed the perfect pour over – where you hand-pour the water over ground coffee – a few minutes later.

But when I asked for a bit of sugar, the barista flatly refused, telling me they didn’t offer it. What happened to the ‘how do you take your coffee’ culture I was used to? Irritated, I had no choice but to drink it unsweetened.

Actually, it was pretty good. Turns out I had stumbled upon Oddly Correct Coffee Bar, a cafe in Kansas City, Missouri. A café which I subsequently found out many foodies consider to be one of the top coffee spots in the US.

Part of its so-called charm is its enforcement of strict coffee culture rules. Oddly Correct is part of a new breed of high-end coffee shops that have adopted zero tolerance policies on sugar, milk and cream to preserve what they feel is coffee quality. Others simply opt out of selling smaller espresso-based drinks ‘to go’ because they feel the taste suffers if not enjoyed right away. 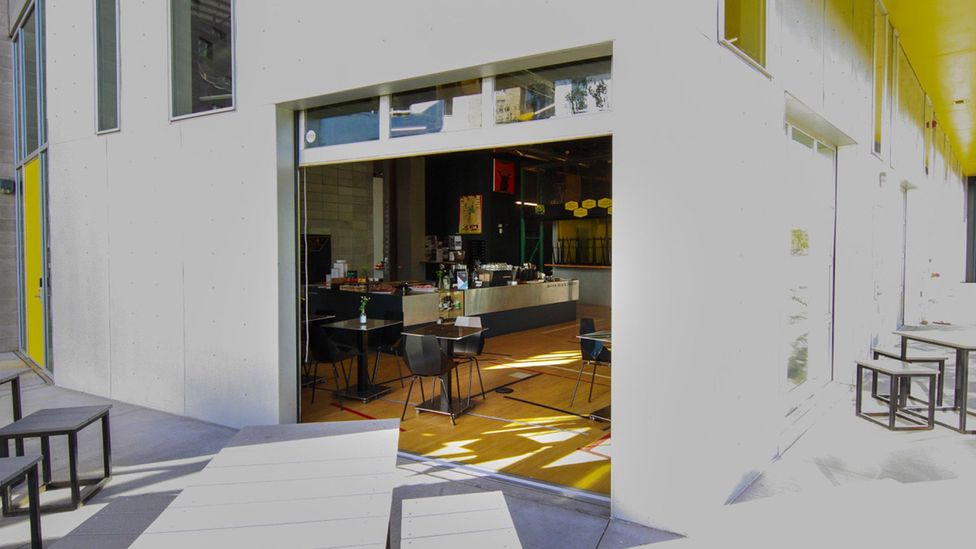 Often called Third Wave coffee shops, these aficionados use high-quality roasted beans that they feel should be consumed unadulterated by additional flavours (even ones their customers might wish to add). Many of these zero-tolerance coffee shops feel that they are simply re-educating consumers by implementing these rules, but the issue is polarising.

“To say ‘we’re so high quality that we have these restrictions’, it has worked for some places; some customers see that and say ‘wow, these people take it really seriously’. But it can also alienate people who are just getting into speciality coffee,” says Sarah Leslie, a member of the Barista Guild Leadership Council, a trade group for speciality coffee baristas in Europe and North America.

Acolytes include Aunty Peg’s in Melbourne and Kontact Coffee in Budapest who believe their customers should shun sugar, milk and cream. But the number of zero-tolerance coffee shops remains a tiny fraction of the more than 32,150 coffee shops across the US, including 7,720 independents, according to 2016 figures from Mintel, a market research firm.

These days, more restaurants refuse to serve steak well done, cater to different meal requests or even serve the condiments that some customers may request

Of course, so-called zero tolerance policies aren’t unique to coffee and are expanding throughout the food service sector. These days, more restaurants refuse to serve steak well done, cater to different meal requests or even serve the condiments that some customers may request.

“Getting the food served just as intended and maintaining consistency day in and day out is gaining momentum in the industry,” says Darren Tristano, a marketing and trends expert in the food industry who is based in Chicago. For the food businesses it often means providing better quality and faster service to customers, which helps to offset disappointment for “customers used to options”, he adds.

‘Accommodating, but not yielding’

At Black Black Coffee in Denver, the slogan is: ‘If your coffee needs doctoring, it must be broken.’ Making the ‘no-additions’ policy evident in the name has helped manage new customers’ expectations, says owner Josh McNeilly.

Customers can purchase pour overs and cold brew, but sugar and milk are not offered. Some classic drinks like the macchiato, cortado and cappuccino do come with milk but not sugar, he adds.

If your coffee needs doctoring, it must be broken

The idea is to let customers taste the quality of beans from places such as Colombia and Ethiopia, and detect different notes similar to tasting a glass of wine. For McNeilly, after decades as a barista and coffee buyer, the rule was a no-brainer. “As a barista you’d tell them that this is one of the best farms on Earth and they just go and dump cream and sugar in it without trying it,” he says. “It was heartbreaking.”

At Oddly Correct, where I first encountered this trend, the rules are relaxing slightly. Last month, the shop started stocking milk and cream behind the bar for people who ask (it’s still not sitting out in the open and was secretly poured for a few months before that) to be more inclusive, says Mike Schroeder, roaster and co-owner.

Sugar is still a no-no, but relaxing the policy around adding milk to brewed coffee has already led to an uptick in business, he says. Even though few people actually ask for the cream, knowing it’s available has helped change the shop’s image to be more accepting of different choices around coffee, he adds. “We realised we had to move our fences out a little bit to guide people into that [coffee] experience.” 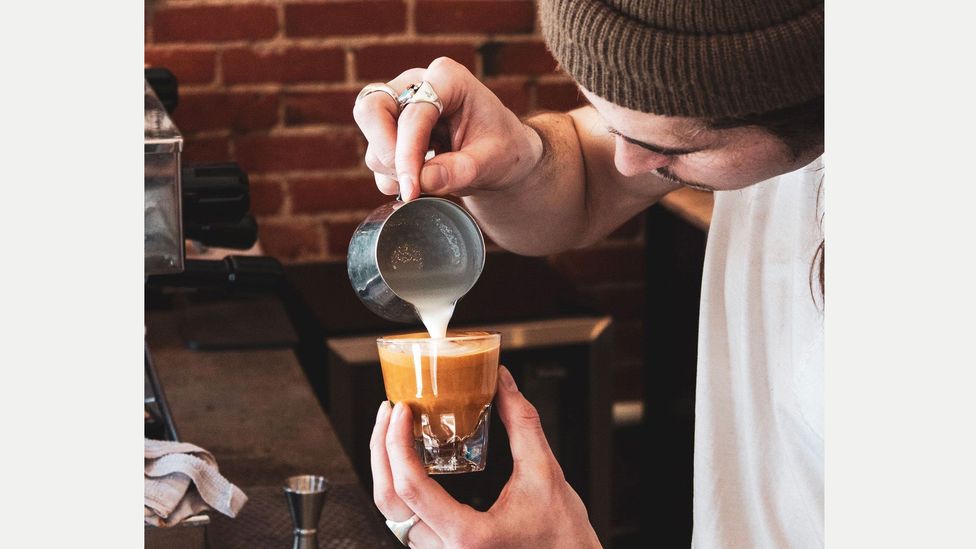 Oddly Correct has relaxed its policies slightly and started stocking milk – but you have to ask for it (Credit: Oddly Correct)

Oddly Correct has also added some sweeter drinks: a vanilla latte is sweetened with a locally made bourbon syrup, for instance. Baristas have softened the way they discuss the policies. “We’ve learned how to refine our language and our approach in ways that are still welcoming and accommodating, but not yielding to every single request,” he adds.

Zero-tolerance coffee shops in larger markets may see the most benefit. With a clientele that’s focus on meticulous preparation, the request to drink it black can be seen as a sign of quality, adds Leslie, who owns a shop in Wichita, Kansas, where sweetened coffee with milk is still popular. In larger global cities, “it’s a positive thing to them to be seen as a coffee snob”, she adds.

Some coffee drinkers say the shops have helped them learn about coffee – and they eventually change their preferences. “My everyday drinking coffee I now prefer black,” says Charles Carpenter, a 49-year-old graphic designer who visits Black Black in Denver. 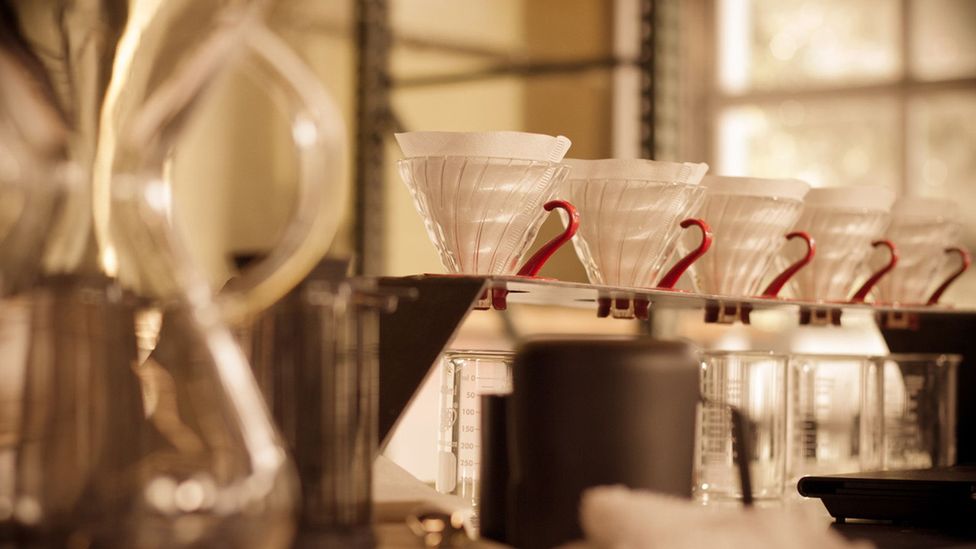 If it wasn’t so strict about what it served, Black Black could make a lot more money, owner Josh McNeilly says (Credit: Black Black Coffee)

But he hasn’t totally given up his sweeter indulgences, especially during the colder months. “My dirty little secret is I love eggnog lattes around the holidays,” says Carpenter.

At Black Black, McNeilly concedes that his policy isn’t always good for business and the shop sometimes struggles to turn a monthly profit. “It could easily be twice as profitable if I served cream and sugar and bigger lattes, but it’s my passion to try to educate people on what coffee could possibly taste like,” he says.

Most customers are loyal regulars and come back several times throughout the week. The shop’s pour overs are mentioned in must-try lists locally and it now also serves food, making it more of a destination for customers from further away. A cascara latte has also been added for those with a sweet tooth, combining cascara fruit that surrounds the coffee bean on the plant with a dash of simple syrup and steamed milk.

To mitigate negative comments, McNeilly trains his team in how to explain the shop’s philosophy to first-time customers. Baristas focus on helping customers understand why milk and sugar aren’t served rather than simply telling them it’s not available, he adds.

But one thing he hasn’t done? Given in to surprised customers who demand sugar and cream. “It would be the easy route to say ‘OK fine, I’ll give you cream and sugar, just don’t make a big deal out of it’... but we’ve never actually done it,” he says.