A pub without alcohol is something of an oxymoron – but they’re growing in popularity. Is it time to sober up?

When you walk into Getaway, a stylish bar off a main avenue in Greenpoint, Brooklyn, you could be in any number of Instagram-friendly cocktail spots in New York. The walls are tasteful green and blue, the space feels cosy enough that you could easily join a neighbouring conversation, and the menu features a list of $13 (£10) cocktails with ingredients like tobacco syrup, lingonberry and jalapeno puree, with a friendly note from the owners that laptops are not allowed.

But there is a crucial difference between Getaway and other Brooklyn bars: Getaway is totally alcohol-free.

A bar without booze sounds like an oxymoron, like an aquarium without fish or a bakery that doesn’t serve bread. But in cities like New York and London, where bars often function as second living rooms for apartment dwellers with little space, an alcohol-free nightlife option can appeal to people who, for whatever reason, would prefer not to drink.

Sam Thonis, who co-owns the bar with Regina Dellea, got the idea for Getaway three years ago, when he and his brother, who doesn’t drink, were trying to find a place to go out together at night. “There weren’t many nightlife options in New York that didn’t revolve around alcohol or weren’t trying to push that on you in some way,” Thonis says. “The more I talked to people, some of whom are sober and some of whom aren’t, the more I felt that people wanted that kind of space.”

In response, Thonis and Dellea made their bar a studiously 0% alcohol space, meaning that not even non-alcoholic beers that have a trace amount of alcohol are allowed on the menu. In the US, the term ‘non-alcoholic’ may be applied to beverages with 0.5% alcohol by volume or less, which means many popular non-alcoholic beers aren’t actually alcohol-free.

“It’s 0% as much as humanly possible, so if you’re sober and it’s an issue for you, or you don’t even want the smell of alcohol around you, you’ll be safe,” Thonis says. But it still looks and feels like a bar - it only opens in the evenings, the lights are low and no one appears to be working on their screenplay.

It’s 0% as much as humanly possible, so if you’re sober and it’s an issue for you, or you don’t even want the smell of alcohol around you, you’ll be safe

Getaway, which opened in April, is part of a growing global wave of nightspots that specifically cater to people who are avoiding alcohol, but still want to go out and socialise in spaces that have traditionally been dominated by drinking. There’s Vena’s Fizz House in Portland, Maine and The Other Side in Crystal Lake, a suburb of Illinois. In London, alcohol-free Redemption bar now has three locations, as well as a menu of vegan, sugar-free, wheat-free food. In January, The Virgin Mary, an alcohol-free pub, opened in Dublin. 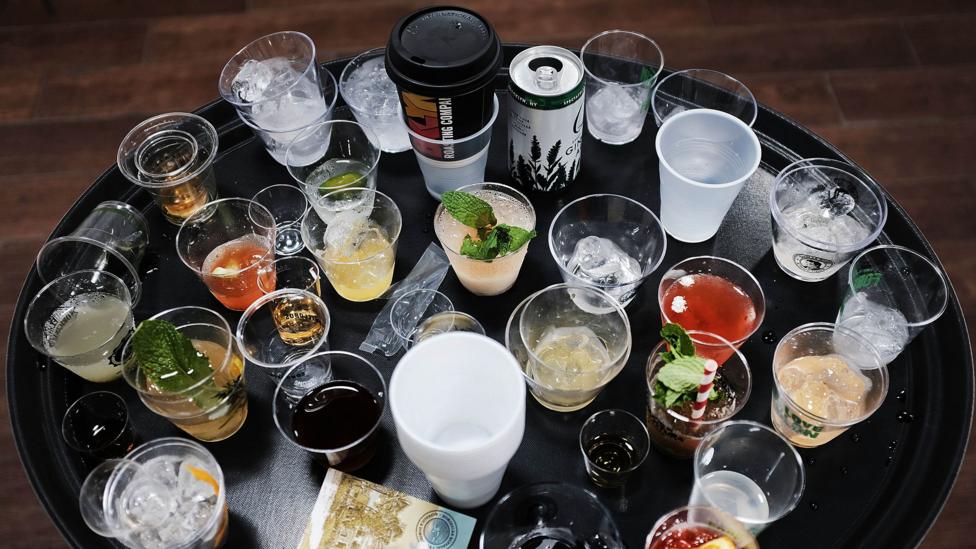 Alcohol-free bars aren’t a new concept. In the late 19th Century, a number of alcohol-free bars known as temperance bars were established in the UK on the heels of the temperance movement, which advocated abstinence. Fitzpatrick’s Temperance Bar, founded in 1890 in Rawtenstall, north of Manchester, is still slinging root beer and glasses of dandelion and burdock today.

But what’s different about today’s wave of alcohol-free bars is that they aren’t necessarily rooted in the idea of total abstinence. At Getaway, for example, the audience isn’t just non-drinkers but anyone who wants a fun bar environment without the threat of a hangover the next day. “Nothing about our space says you should be sober, or you shouldn’t go around the corner to another bar and do a tequila shot after hanging out here,” Thonis said. “It’s not exclusively for the non-drinker.”

In that way, Getaway touches on a movement that has urban millennials reconsidering the place of alcohol in their lives. Lorelei Bandrovschi , 32, falls into that category. Last year, she began organising alcohol-free pop-up events under the name Listen Bar for people who wanted to cut loose without alcohol playing a part. She used to work as a consultant for brands like YouTube and the Museum of Modern Art in New York, but working on Listen Bar is her full-time occupation now.

“Bars are a space of relaxation, and we’ve been made to believe that alcohol has to be a part of that,” Bandrovschi says. “It’s really liberating to create space for yourself and your life where a rowdy party vibe doesn’t mean a hangover and blurry memories.” The word ‘rowdy’ is a key part of what Bandrovschi is going for with these events. “There’ve been moments at our first Williamsburg pop-ups where people are dancing on tables and karaoke-ing their hearts out,” she says. “Being good to yourself doesn’t mean only being zen and subdued.”

Bandrovschi isn’t sober herself, but after taking a month off drinking she noted a lack of options for people who wanted to go out with their friends without being stuck ordering a soda while everyone else is getting thoughtfully curated mixed drinks. “I think that bar culture, from the menu to the staff to the patrons, tends to make not drinking sort of an outsiders’ hobby,” she says.

I think that bar culture, from the menu to the staff to the patrons, tends to make not drinking sort of an outsiders’ hobby

“I refer to my personal philosophy as drink optional. In order to get to a drink optional culture as opposed to the current drink-by-default culture, we have to celebrate the choice of not drinking. It should have as much space as drinking, spaces that are cool and fun and desirable spaces to go. I wanted to create something that was missing from culture, and I really wanted to change culture.” 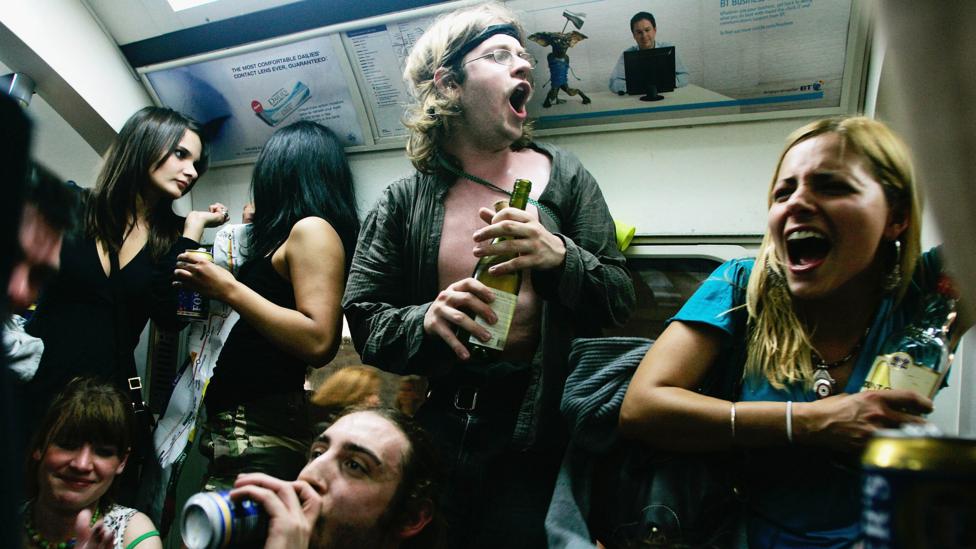 In 2016 just 56.9% of UK over-16s had had a drink in the week before, the lowest percentage on record since the office began asking the question in 2005 (Credit: Getty Images)

This “drink optional” attitude may not yet be the default, but there are indicators that young people aren’t drinking as much as they used to. In 2016, among adults over the age of 16 polled by the British Office of Nationals Statistics, just 56.9% had had a drink in the week before, the lowest percentage on record since the office began asking the question in 2005. In February, the International Wine and Spirits Record claimed that 52% of American adults they surveyed were currently trying to or had previously tried to reduce their alcohol intake.

A series of articles on recent trends indicates that millennials are reconsidering when and how they drink.  Beer sales are in decline in the US and, though that may mean that more health-conscious consumers are just turning towards higher-octane spirits, the alcohol industry has responded to the slump by introducing more low- and no-alcohol options, like Heineken’s 0.0 non-alcoholic beer that launched in 2017 or Gordon’s ultra-low-alcohol canned gin and tonic.

Non-alcoholic drinks are poised to be big business, even in spaces that aren’t alcohol-free. Increasingly, high-end restaurants are including a non-alcoholic pairing for their tasting menus as well as a traditional wine or cocktail pairing. And mixologists and beverage directors are taking the trends as an opportunity to create interesting drinks without the traditional ballast of spirits.

Chelsea Carrier, the beverage director of o ya, Covina and The Roof Top in New York, worked with her team to create a non-alcoholic pairing for the food at o ya, a Japanese restaurant. “So many guests were asking for NA options, and they didn’t want to just drink water,” Carrier says. Now, she estimates NA drinks are about 20% of the drinks ordered at the restaurant and that the thoughtfulness of the non-alcoholic cocktails makes customers who aren’t drinking alcohol feel included. “You can be sitting next to someone drinking a couple-of-thousand-dollar bottle of wine and be drinking a non-alcoholic cocktail and belong just as much,” she says. 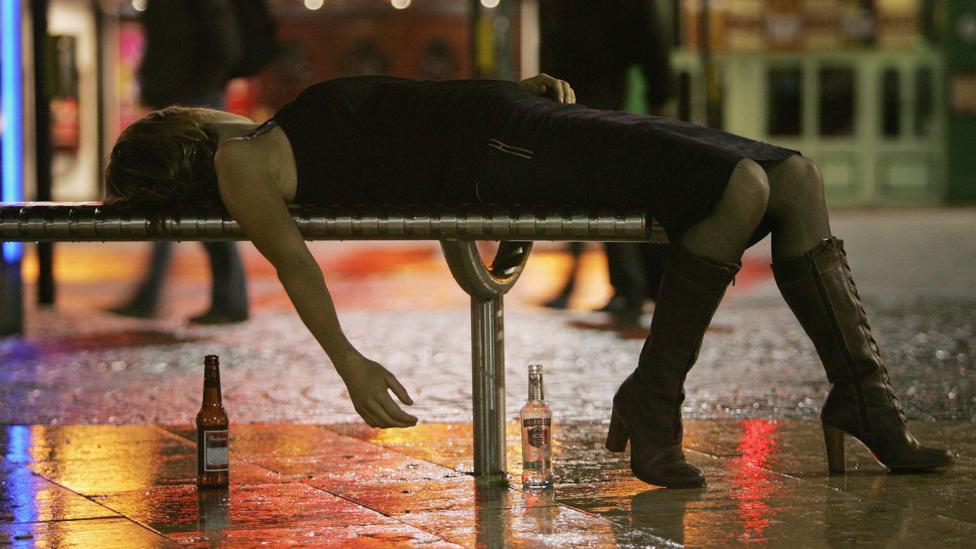 In 2017, among those in Great Britain who had drunk alcohol, 27% were classed as binge drinkers based on their heaviest drinking in the previous seven days (Credit: Getty Images)

At Existing Conditions, a bar in New York’s Greenwich Village which is known for its wildly inventive cocktails, like a take on an Old-Fashioned that includes waffle-infused bourbon and maple syrup, non-alcoholic cocktails are prominent on the menu and, according to beverage director Bobby Murphy, are some of the most expensive items they make, both in terms of ingredients and labour.

One drink, the Stingless, requires Melipona honey, made by tiny bees in Mexico that can cost $100 for a kilo. Another non-alcoholic drink is built around clarified Comice pear juice, an ingredient that meant the Existing Conditions team had to purchase and juice 980 pounds of in-season pears - each drink has about six pears in it.  “Just serving a soda isn’t enough anymore,” Murphy says. “When we make the non-alcoholic drinks, we want them to be something you can’t get anywhere else.” He estimates that 20-30% of the total drinks they sell at Existing Conditions are non-alcoholic.

Many of the wave of sober bars are new, and it remains to be seen whether they will continue to proliferate and thrive. In Auckland in 2015, an alcohol-free bar shut down after just five weeks. But there’s no doubt that interest in non-alcoholic adult beverages is increasing across the beverage industry, and that’s unlikely to stop soon.

As for Getaway, co-owners Sam Thonis and Regina Dellea look at it as an option in a city full of specific venues catering to specific interests. Business has been steady in the last month. “Every day I worry that no one’s going to come in, and 20 minutes later it’s bustling,” Dellea says. Their customers have included curious locals, pregnant women and the studiously sober, but Dellea and Thonis hope that the appeal of the bar is wide. “It can be for everyone, but it doesn’t have to be,” Thonis says. “There are a million options. If people don’t like us that’s fine. They’re allowed. For the people who do want to be here, we’re here.”