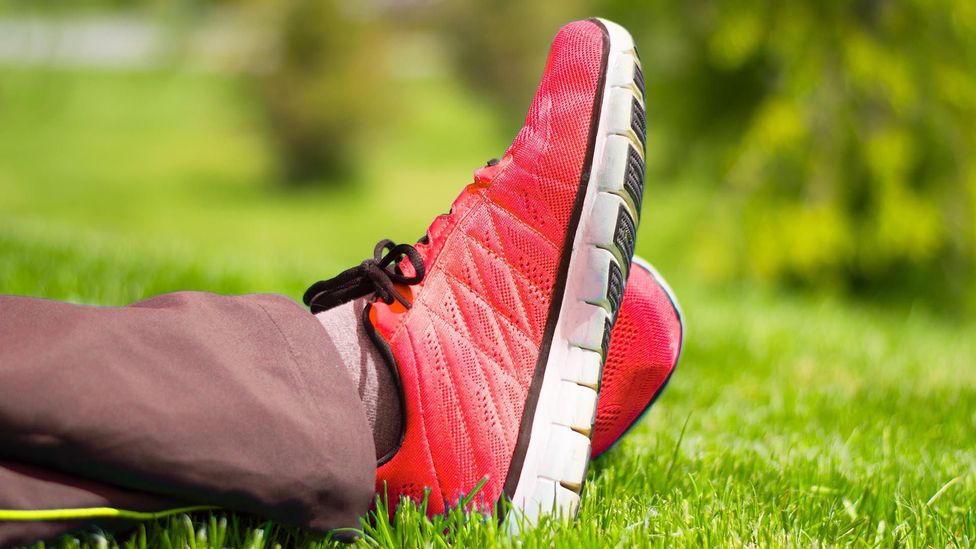 By Seb Murray 16th May 2019
The hidden upsides of “maverick” workwear.
W

We all want to fit in. Never more so than at work which means most of us sink significant time and money into trying to get our heads around all the hidden dress codes and etiquette.

This dutiful compliance with office norms signals we are knowledgeable, resourceful and that we belong, says Rick Harbaugh, an associate professor of business economics at Indiana University’s Kelley School of Business.

But would a more off-the-wall approach be a better investment? 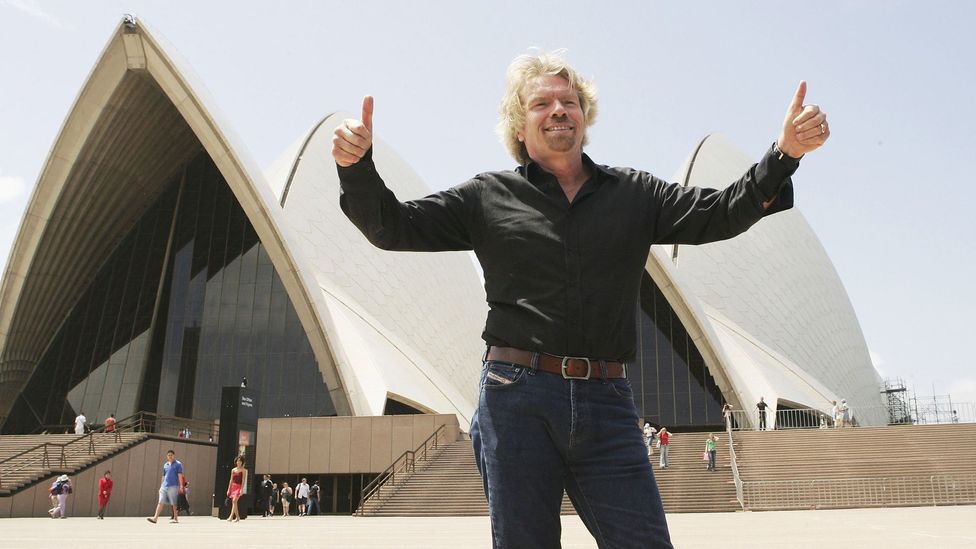 The British billionaire famously ditched a suit and tie in the 1990s for an open-neck shirt and pair of Levi’s jeans (Credit: Getty Images)

The British billionaire famously ditched a suit and tie in the 1990s for an open-neck shirt and pair of Levi’s jeans (Credit: Getty Images) 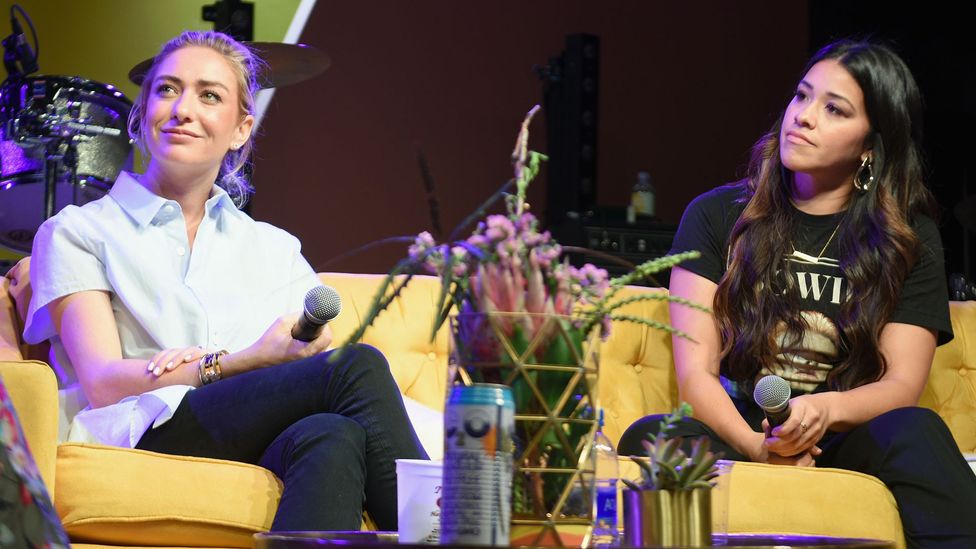 The founder of dating app Bumble is renowned for attending business meetings in jeans and flat shoes (Credit: Getty Images)

The founder of dating app Bumble is renowned for attending business meetings in jeans and flat shoes (Credit: Getty Images) 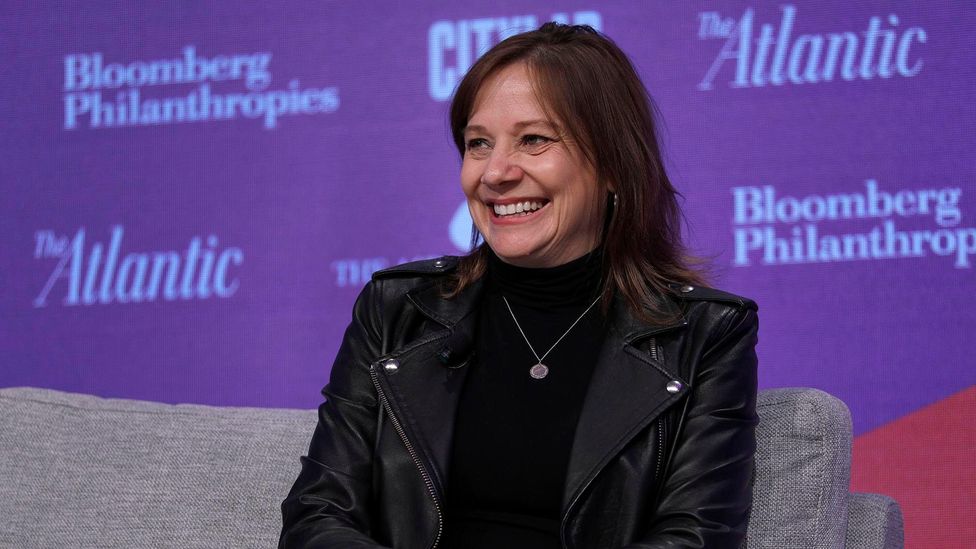 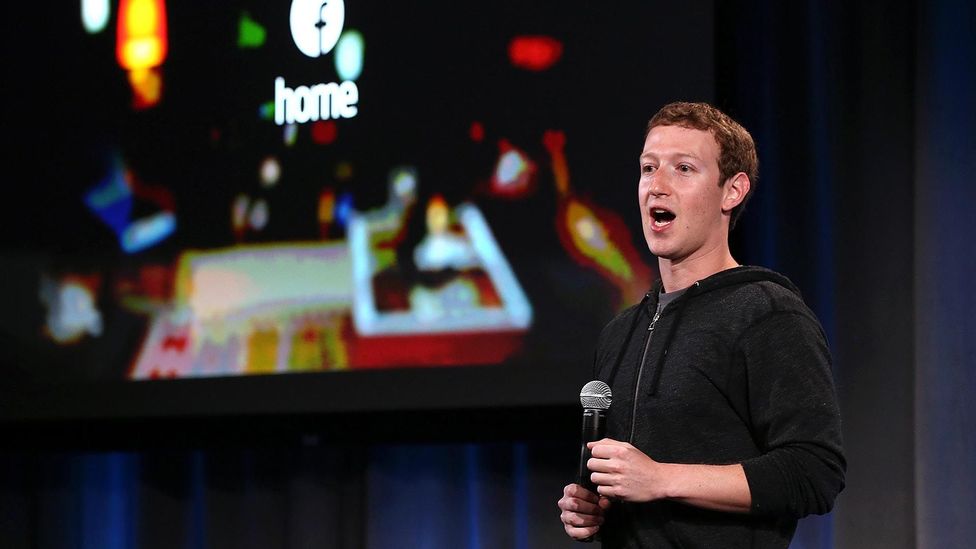 The Facebook CEO is known to dress-down in grey t-shirts and hoodies (Credit: Getty Images)

The Facebook CEO is known to dress-down in grey t-shirts and hoodies (Credit: Getty Images) 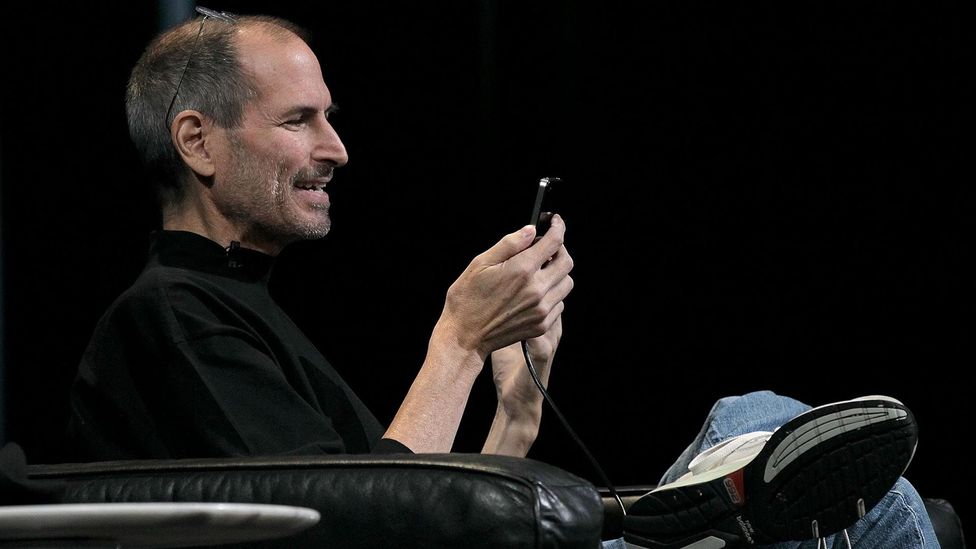 His black turtleneck, jeans, and New Balance sneakers made him one of the most recognisable technology leaders (Credit: Getty Images)

His black turtleneck, jeans, and New Balance sneakers made him one of the most recognisable technology leaders (Credit: Getty Images) 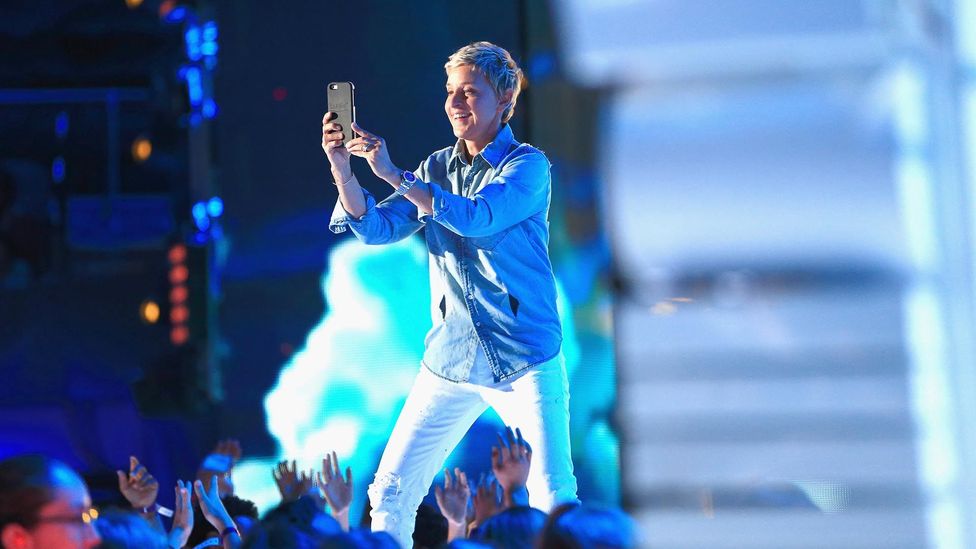 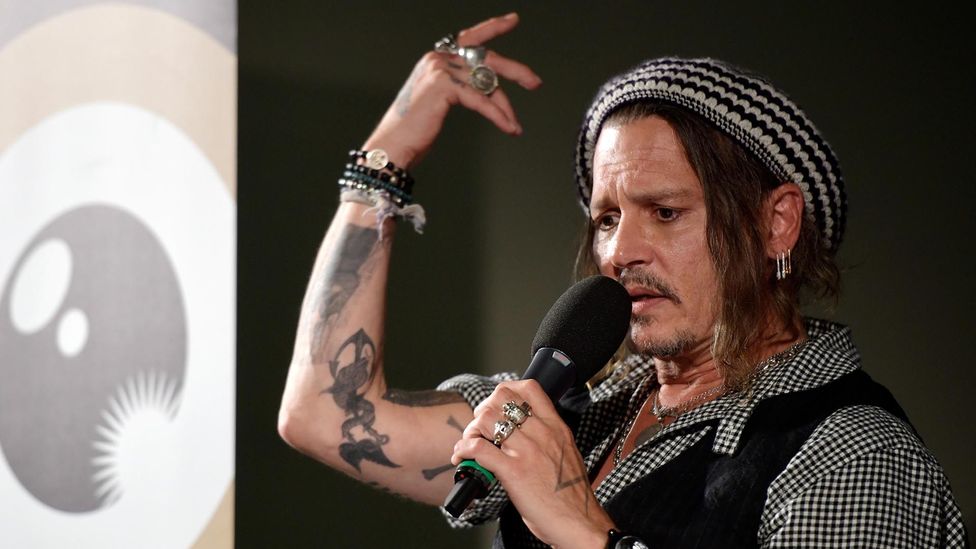 The actor is renowned for an out-of-the-ordinary look, for example unique blazers and trilby hats (Credit: Getty Images)

The actor is renowned for an out-of-the-ordinary look, for example unique blazers and trilby hats (Credit: Getty Images)

Standing out from the crowd

Standing out, rather than fitting in, could in fact be the smarter route to success. A phrase coined in a study published in the Journal of Consumer Research in 2014, the “red sneaker effect”, revealed we confer higher status and competence on mavericks versus conformists.

So we often perceive someone wearing clothing that deviates from the norm in professional settings as having higher ability, rank and respect than colleagues who conform to dress codes.

Nonconformity must appear intentional for people to think more of us

This is because diverging from the norm signals you have autonomy and can bear the cost of nonconformity – even if it costs you your job.

“We often think that divergence from cultural norms has a ‘social cost’, or a negative rather than positive consequence,” says Silvia Bellezza, an associate professor at Columbia Business School in New York and one of the study’s authors, who argues this is sometimes not the case.

But “risk-taking signals that you have enough social capital to maintain your status even if the nonconformity backfires,” she says.

That’s why junior employees often try to blend in, adds Bellezza, since the stakes are higher. “Many successful businesspeople have flouted convention, like Apple’s Steve Jobs” who ditched his suit for a black turtleneck.

Nonconformity must appear intentional for people to think more of us though, she says. “If you wear sneakers [trainers] in a professional setting for example, people may think it’s because you can’t afford shoes.That’s not the hallmark of a successful person!” 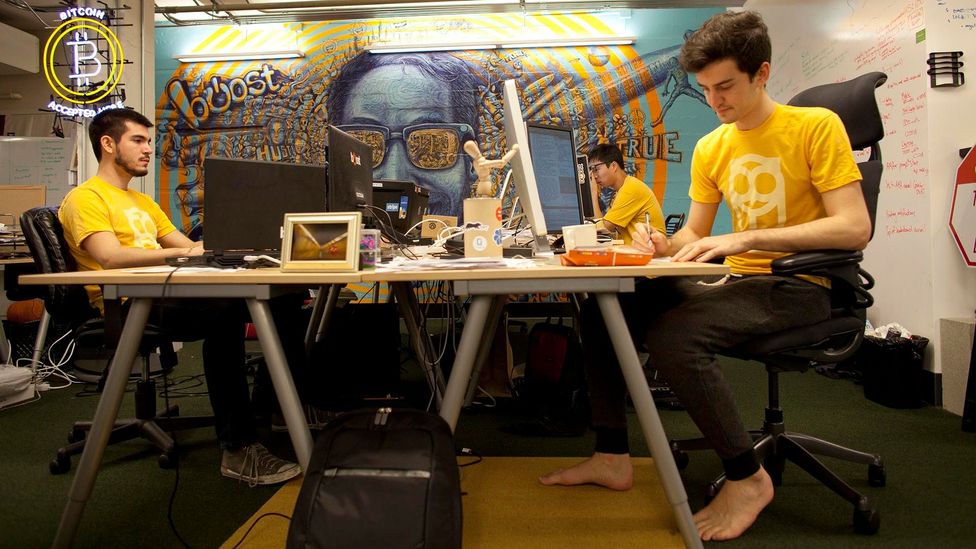 Some of the better-known examples of rebellion, such as Facebook’s Mark Zuckerberg (with his trademark hoodie and grey t-shirt) or TV anchor Jon Snow of the UK’s Channel 4 (with his funky socks and lurid ties), tend to be white men.

Even in industries with relaxed dress codes such as tech, many of the highest profile women like Sheryl Sandberg of Facebook still sport more conventional, formal attire.

This may simply reflect the fact that there are far more white men in senior positions than women and minorities. Therefore, there are also more opportunities for white men to break the established rules, points out Astrid Homan, a professor of organisational psychology at the University of Amsterdam, who has researched the consequences of norm-violating behaviour.

But Katherine Phillips, a professor at Columbia Business School who studies diversity and inclusion, points out that women and ethnic minorities working in fields traditionally dominated by white men can face a lot more pressure to conform because they already don’t fit the standard mould.

She says that you need to be comfortable in a position of privilege to opt for the red sneakers strategy. “Many women and people of colour feel they need to be established, to feel enough security to bring their full self to the table, which is something that they find harder to do because they worry about whether they will be accepted,” says Phillips.

In banking or government, for instance, deviating from the norm could offer the richest rewards

Of course, men are criticised for informality too. Broadcaster Robert Peston, a former BBC economics editor, was slated for slouching and revealing chest hair beneath his tie-less collar in an interview with George Osborne, the former UK chancellor of the exchequer. 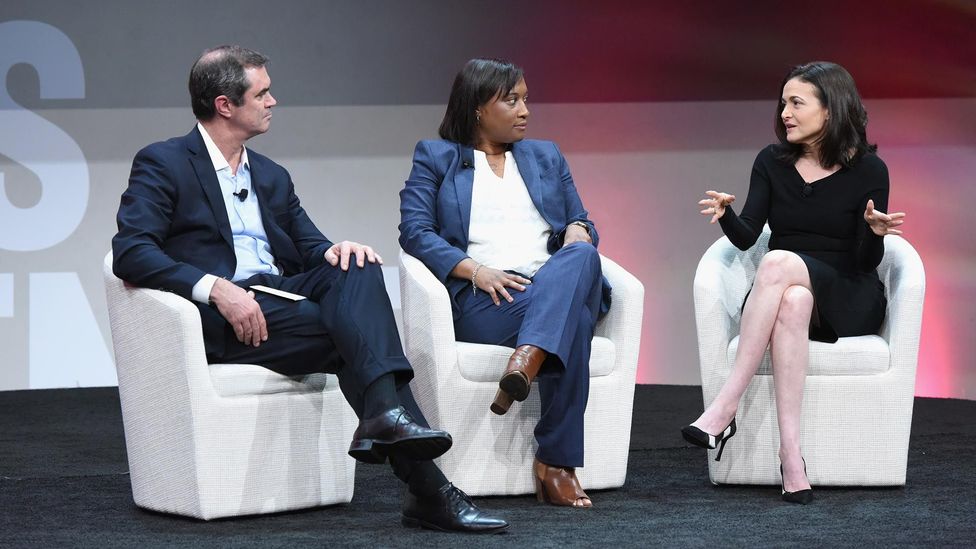 Some experts argue that women don't get as much freedom to dress casually, like Facebook's Sheryl Sandberg (Credit: Getty Images)

The backlash was consistent with research by Namrata Goyal, an associate research scholar at Columbia Business School,who found that nonconforming behaviour backfires when people violate “injunctive” norms, i.e. unwritten rules which are respected: for example, wearing a tie to meet a client, which conveys reverence.

Flouting “sacred” norms can seriously backfire; for instance,  dress codes that are time-honoured or rooted in religion, says Goyal. “Violating injunctive norms will be viewed as anti-social behaviour and violating sacred norms would be to insult your colleagues.”

In Peston’s case, the British political establishment is still snared in formality – until recently, centuries of tradition dictated that male MPs had to wear ties to address parliament.

Does this mean the red sneakers effect is most powerful in more ‘casual’ or ‘new’ industries such as technology?

Bellezza argues that the opposite is true. She says that in banking or government, for instance, deviating from the norm could offer the richest rewards – because the behaviour will still be perceived as nonconforming.

Whereas “the problem with Silicon Valley is precisely that these behaviours have become the uniform,” she says. “Wearing a t-shirt and sneakers in that context is mainstream.”

One important factor to consider is the culture in which we transgress. Homan analysed how nonconformity is viewed by different cultures. The study found norm violators were seen as more powerful than conformists and evoked less outrage in individualistic cultures, such as much of the western world.

But she found that in collective cultures,such as East Asia and Latin America, people prefer norm followers as leaders, because they may prioritise organisational goals over their own.

She believes that research is essential to using it to good effect. “Understanding who observes the non-conforming behaviour and where it’s done is the key to making it work for you.”