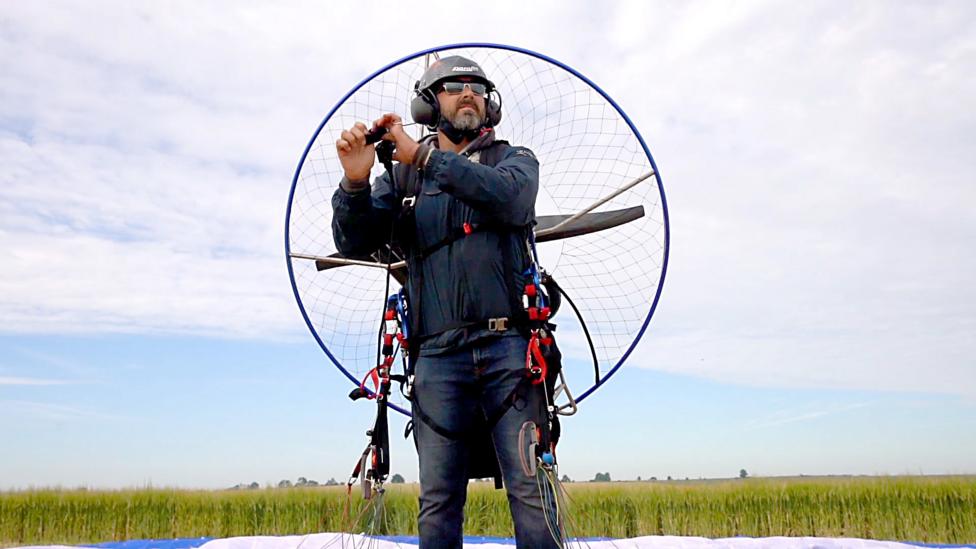 The man who gets to work in a flying machine

Tom Prideaux-Brune uses an engine-powered paraglider to get to work in Wiltshire, England.

“You arrive invigorated, excited, full of energy, full of drive, full of ideas,” says Tom Prideaux-Brune. “It only makes the day better.”

He’s referring to his unusual mode of transport to work. He straps onto his back a harness attached to a netted hoop and a paraglider, which is powered by a motorised propeller. He takes a few steps and ascends into the air, travelling at around 50km an hour, though some paramotors can go faster.

The countryside views are gorgeous, and Prideaux-Brune arrives at his office in Wiltshire in south west England feeling inspired by his commute. Fittingly, he’s the sales and marketing director for Parajet International, which makes and sells the devices.

Though he’s not the only one to fly for his commute, paramotoring is a special thrill that isn’t entirely without risks. A friend of Prideaux-Brune’s died last year when his paramotor hit a power line and he plunged to the ground. Research suggests that accidents mainly occur during takeoff, and paramotor pilots should avoid flying over water.

And regrettably, Prideaux-Brune says, paramotoring isn’t for Londoners or anyone living in an area where this kind of flying is restricted by aviation law. It also depends on good weather, so he makes sure to check the forecast before setting out by paramotor.

Watch this video for some commute envy, see Prideaux-Brune’s paramotoring in action.