Less than 10% of the top-earning dead celebrities are women – it shows how the gender pay gap persists even after life.
T

Death is no excuse for celebrities to stop working. James Dean, despite being dead since 1955, has recently been cast in a new Vietnam war movie, Finding Jack. His co-starring role will be computer generated from old footage and photographs and voiced by another actor. The dead are now rivals with the living for parts in movies.

This controversial casting decision has been met with outrage by many actors on Twitter. Complaints have circulated about puppeteering as well as being disrespectful to the dead movie idol.

Dean is by no means the first dead celebrity to continue to perform after death. Nat King Cole sang with his daughter Natalie on her 1991 Grammy Award-winning album, Unforgettable … With Love, and performed on stage with her via a video screen.

Meanwhile, Tupac Shakur sang on stage with Snoop Dogg and Dr Dre in 2012 and Michael Jackson performed as a hologram at the Billboard Music Awards in 2014.

If, as Dean stated: “Immortality is the only true success,” then success is achievable for a growing number of high-profile dead celebrities who have remained productive and valuable after death.

But some dead celebrities are more valuable than others.

Gender inequality sustains even in death. Of 52 top-earning dead celebrities, only five have been women since 2001, including US actress Marilyn Monroe (Credit: Getty Images)

Both in life and death, celebrities wield significant power as a catalyst for cultural meaning. They possess symbolic and economic value that extends into death through the traces they leave behind. These traces continue the dead star’s celebrity power as a brand and include such things as photographs, films, signatures and recordings of their voice, as well as their celebrity persona (the character or personality they presented to fans).

Death is not the last great equaliser – inequality continues in death

But this posthumous celebrity varies in value. For many high-profile celebrity women, the traces they leave possess sexualised value, much as they had in life – related to their youth, beauty and sensuality. A great deal of their symbolic and economic value is about their bodies, so the way in which their traces are put to work after they die reflects gendered inequality.

The way in which gender inequality reaches beyond the grave is clearly revealed by Forbes magazine’s publication of its Top-Earning Dead Celebrities List every October since 2001. Affectionately referred to as the Dead Rich List, it reveals distinct gender inequality. Of 52 celebrities who have appeared on the list in nearly two decades, only five have been women: actresses Marilyn Monroe and Elizabeth Taylor, 1950s striptease artist and pin-up model Bettie Page, and singer-songwriters Jenni Rivera and Whitney Houston. 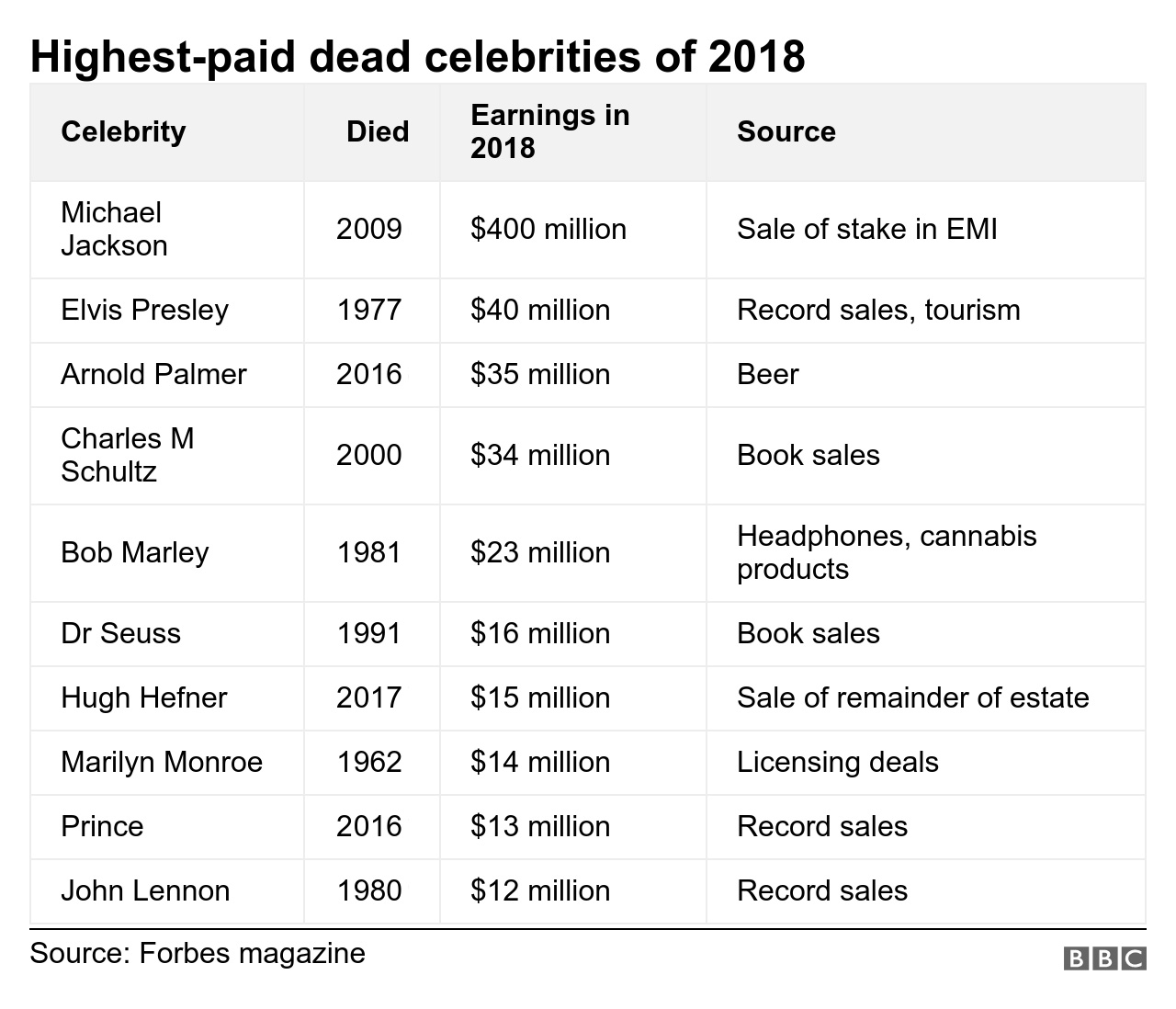 Men – including Michael Jackson, Elvis Presley and Charles Schultz (of Peanuts fame) – consistently dominate the top positions on the Dead Rich List. Their earnings after death are staggeringly high compared to those of the women who appear.

First place has been held by Michael Jackson every year since his death (excepting 2009 and 2012) helping buck the trend of the underrepresentation of black and minority ethnic performers. Jackson’s earnings have been immense, rising to $825 million in 2016 due to the sale of his half of the Sony/ATV Music catalogue which owned much of the Beatles’ music, before dropping to their lowest point in 2019 with $60 million.

In contrast, Monroe was the highest female earner with $13 million in 2019, allowing her to maintain eighth place on the list for a second year.

Forbes suggests that to achieve a financially successful posthumous career it helps to be a white man from either the US or UK, although black and minority ethnic people (BAME) are more likely to make the cut now than in 2001 as illustrated by Michael Jackson, Bob Marley, Prince and Whitney Houston making recent lists.

Of 52 celebrities who have appeared on the list in nearly two decades, only five have been women

Deceased US actor James Dean's computer-generated likeness is slated to be used in an upcoming film about the Vietnam war (Credit: Getty Images)

But even if they make the rich list, the posthumous career earnings of Monroe, Taylor, Page, Rivera and Houston illustrate how women and black and minority ethnic people continue to be underrepresented among those who achieve high incomes after death. They reveal that celebrity value, in terms of symbolism and economics, is heavily gendered after death.

For many high-profile celebrity women, the traces they leave possess sexualised value, much as they had in life

Dead celebrity women’s posthumous careers are limited by being valuable due to their bodily capital. Men have a good track record of making wealth through the books they write or the music and lyrics they compose and own. In contrast, celebrity women are less likely to be a source for the production of wealth but a means for generating wealth for others.

But the 21st Century, in particular, is witnessing the emergence of perceptive and well-informed celebrity women who own the sources of production of wealth and are not restricted to their bodily capital. Women such as Oprah Winfrey, the Kardashian sisters and JK Rowling are in firm control of their economic and symbolic value – which is something they can take forwards into death.

Pretty much all of the possible women candidates for future lists have long lives ahead of them – hopefully, barring illness or accident – meaning it will be many years before this gendered inequality in death is properly challenged. As it stands, gendered inequality of bodily capital means that for celebrity women, death is not the last great equaliser – inequality continues in death.

Ruth Penfold-Mounce is a senior lecturer at the University of York. Read more from her on The Conversation here.