It’s a childhood staple for millions around the world – and we might have a jar of onions to thank.

This story is from Pickled onions inspired me to design the ball pit, an episode of Outlook on BBC World Service. It was presented by Emily Webb and produced by Harry Graham. To listen to more episodes of Outlook, please click here. Adapted by Bryan Lufkin.

It’s a simple concept, but unusually delightful: the ball pit.

A ball pit is nothing but a big empty hole with a bunch of plastic spheres dumped inside. But there’s also something strange and special about it: the half-swimming, half-freefalling sensation of playing neck-deep in a pool-like space that your brain knows should be filled with water, but instead feels like the inside of a giant gumball machine.

For the better part of 50 years, the ball pit has been a mainstay of the childhood experience for millions of kids across the globe. But whether it’s at an amusement park, a fair or inside a McDonald’s, all of the world’s ball pits can be traced back to one man: its inventor, an English man named Eric McMillan.

McMillan rose from a rough upbringing of toil, labour and urban decay to become the world’s leading designer of children’s play centres. His vision blended colours, textiles and physical exercise, converging in spaces that formed millions of childhood memories.

But the ball pit has a particularly unique origin story of its own. McMillan and his team came up with the idea for the ball pit in San Diego more than 40 years ago, when inspiration struck after looking at a container of pickled onions in the kitchen. “There was a jar of onions, and we were sort of saying: ‘wow, how about if you could crawl through those? And then – ding – we decided we’d try it,” he says.

The first ball pit, filled with 40,000 balls, opened soon after their epiphany. “People just went crazy about it. Thank God for those onions.” 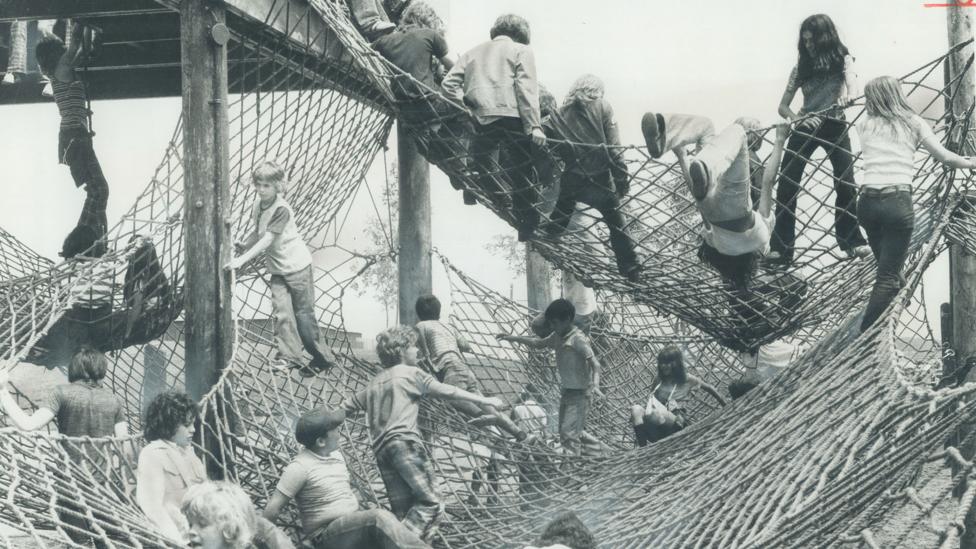 The ‘father of soft play’

Sometimes referred to as the “father of soft play”, McMillan eventually moved to Canada in the 1970s, later inventing things like ball pits for various clients there. One particular job took him to a huge, new urban project called Ontario Place – a futuristic, harbourside collection of arts venues that even had its own theme tune.

His creations had cropped up in scores of countries, across Canada to the US to the UK, and McMillan had become the go-to designer for all things relating to play.

“Play break downs all kinds of barriers,” he says. “Kids, they’re much more open. You can really affect them.”

But a career of traveling the globe making kids’ dreams come true is a stark contrast to McMillan’s own childhood in Manchester. His involved playing in actual rubble of bombed-out buildings in the wake of World War Two, wearing rags and having his father break into the prison next door to try and scavenge enough coal to make it through winter.

He also felt like he wasn’t “a particularly wanted child” and found life at home “quite cruel” despite being somewhat of a miracle baby – he was born during the Luftwaffe bombing campaign and was thought to have been stillborn, until the midwife dunked him and hot and cold water and his heart started beating.

Growing up, getting out of the house became important as he found play to be “kind of a drug”. But most kids didn’t want to play with him. He said he smelled, and came from the working class, so he often found himself surrounded by “the roughest kids”.

After many twists and turns – labouring at age 15, attending nine schools, battling illiteracy – he nabbed a spot in a trade school, after he drew a painting of a tree that ended up in a local gallery. In that same building was an art school: Suddenly, the tough street kid found himself amid “sons of bureaucrats and bankers – all kind of toffee-nosed. Not the kind of people I would associate with”.

But those art kids ended up being his customers when he got a local job as a waiter – he was saving up money for a motorbike. “It turned out they were really nice people.” They mentioned that the art school was introducing a whole new programme based on the Bauhaus movement from Germany. McMillan managed to get a grant, and then a place in the art school. Before he knew it, he was one of the art kids.

Still, it was severe culture shock. “I spoke differently, and apparently I smelled – because I had toilet habits of the working class.” What’s worse, is that his father, stuck in a labouring job of his own that he didn’t like, found himself bitter with his son, who had seemed like he’d been plucked into the upper-crust, rarefied realm of art school. “We got into terrible fights,” he says. 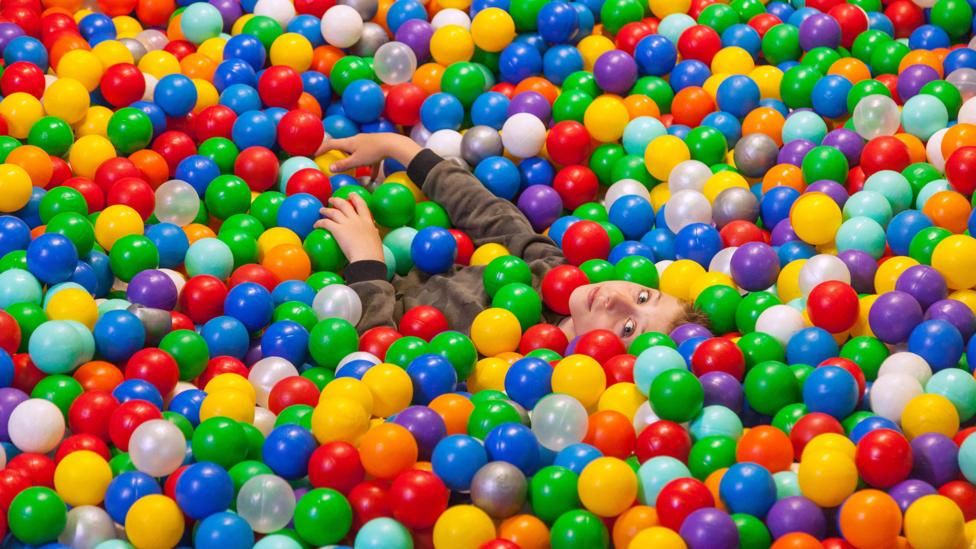 Toward the end of art school, he lived with friends in Moss Side, a neighbourhood in Manchester that was bombed during the war and which had become a disadvantaged area. The area was a literal dumping ground for cars and trucks.

“Kids would slowly – I would watch them – they would slowly ripe them apart. Just take it apart. I once documented, over a period of about six months, them taking down a building. They actually ripped up an abandoned building.” 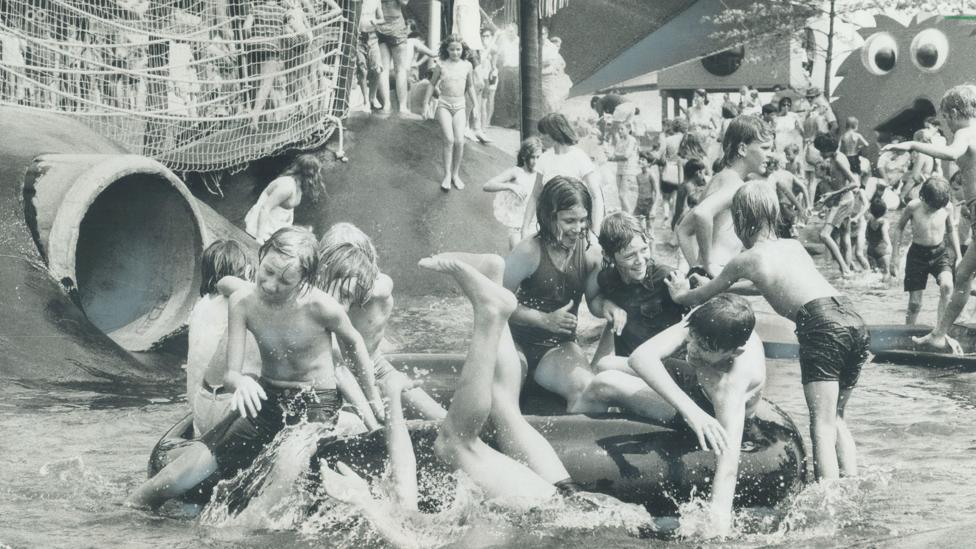 McMillan invented the ball pit, but not before rolling out various attractions at Ontario Place (Credit: Getty Images)

After graduation, McMillan moved to London to design big art exhibition spaces, where his career really took off. Eventually, Canada came calling – it was then that those running Ontario charged McMillan with brewing up attractions for bored kids. A lot was happening in the region at the time, as Montréal had just thrown the 1967 World’s Fair, so McMillan happily relocated.

Two weeks of brainstorming later, he and his assistant, David Lloyd, came back with those “soft play” ideas that became instant crowd favourites. They included a gargantuan air mattress, as well as the foam swamp and punch-bag forest.  Not so unlike the kids in Moss Side, those at Ontario Place’s children’s village, with their limitless energy, threw themselves into the physical play of their environment of cargo nets to inflatable bounce surfaces. So much so that the playgrounds took a bit of beating.

“The village suffered incredible damage. I guess we’d never imagined the ways the kids would employ the various pieces of equipment,” McMillan said in a promotional video at the time, filled with giddily screaming kids and a soundtrack of ‘70s jazz flutes and acoustic guitars. “But the nice thing is, there wasn’t one case of vandalism. All the damage was due to the kids’ enthusiasm for play.”

The children’s village at Ontario Place has since closed. Over the course of the 1970s and ‘80s, many of his projects centred on the art and social behaviour of play, as well as landscapes of industrial, urban areas like the ones in which he grew up and lived.

Now McMillan lives in a log cabin outside Ottawa with his wife, Rose. He’s since reconciled with his father, and has left a lasting mark on the world of play for entire generations of children.

“I was very lucky I survived,” McMillan says of being born during the Blitz and raised among war-torn debris and exploded factories. The creator of the ball pit says his life’s work of helping children play afforded him opportunities he never would’ve had otherwise – opportunities that were deeply rewarding.

“It could be really frivolous – which is the wonderful thing about doing the kind of stuff I did.”