More people are getting tattoos – so workplaces must be keeping up, right? Well, it’s a bit more complicated than that.

“In the last few years, tattooing’s gone absolutely berserk.” That’s George Bone’s take on what he sees as the mainstream take-over of tattoos. Even at the London Tattoo Convention, which claims to be the biggest of its kind in Europe, Bone stands out. Once the UK’s most tattooed man, he is still in charge of his eponymous studio in London at 74 years of age. And he isn’t impressed with the direction things seem to be going.

And while Bone might be underestimating his power to shock – it’s not every day you see a senior citizen with extensive body art – tattooing is becoming widespread in some countries. When Berlin-based market research company Dalia Research surveyed 9,000 people in 18 countries in 2018, they found that 46% of US respondents had a tattoo, rising to 47% in Sweden and 48% in Italy. Research in 2010 by the Pew Research Centre found that 38% of US millennials had a tattoo (though 70% said their tattoos were not usually visible).

In many places, tattoos are no longer the preserve of rebels on society’s fringes. Take Anthony Fawkes, for example. An IT consultant for various investment banks, Fawkes is at the convention to be inked by Nikole Lowe, 47, who owns Good Times Tattoo in Shoreditch, East London. She’s working on an intricate dragon around Fawkes’ left arm which will eventually be a five-part design. 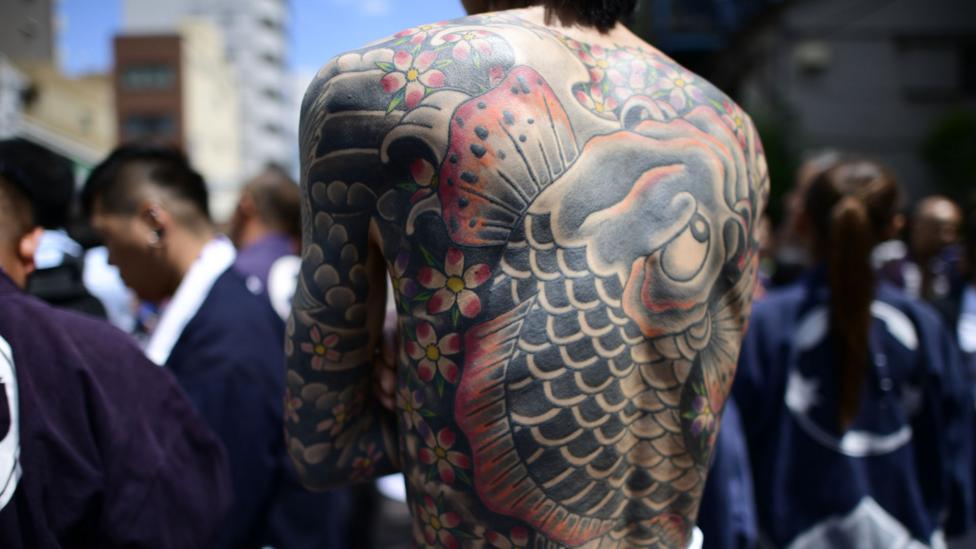 As the 2020 Tokyo Olympics near, Japan is forced to rethink its anti-tattoo tradition (Credit: Getty Images)

“I’m having the Shaolin fighting animals; a snake, tiger, dragon, leopard and crane,” says Fawkes, whose right arm is already inked with the tiger and snake. “Initially I thought I’d have to cover them up at work, but I think it’s so accepted now, the only reactions I get are complimentary.”

Fawkes estimates that the full design will cost around £12,000 ($15,000) altogether, depending on how long it takes. It’s a big chunk of money but then again, it’s not unusual for high earners in established professions to get inked. Senior figures in both business and politics have shelled out on tattoos, including Canadian Prime Minister Justin Trudeau and Lachlan Murdoch, executive co-chairman of News Corp. So it naturally follows that if national leaders and captains of industry do it, getting inked is officially acceptable, right? Well, not quite.

While some may feel comfortable showing off their body art, in the UK, US and many other countries it’s still legal for companies to have a ‘no tattoo’ policy. Some institutions like the US Army have detailed guidelines on what is and isn’t acceptable, while others grant exemptions for cultural reasons; in 2019 Air New Zealand dropped its ‘no visible tattoos’ policy partly because it had meant that traditional Maori markings had to be covered up, creating a backlash.

Specific cultural exceptions aside however, conservative corporate attitudes aren’t necessarily out of step with social attitudes. You might think that in countries where a high percentage of residents had tattoos, there would be a more relaxed view of body art, but that’s not always the case. Research conducted for the University of Northern Iowa by Kristin Broussard and Helen Harton reveals that even in the US, wearing your art as a sleeve can result in social stigma.

In their 2017 study, Broussard and Harton recruited two groups; one of students with an average age of 19 and another from the general US population with an average age of 42. Both groups were shown images of men and women with arm tattoos, then shown the same images but with the tattoos digitally erased. The groups were asked to rate the pictured individuals for 13 character and personality traits including honesty, success, trustworthiness and intelligence.

Apart from the students viewing women with tattoos as being ‘stronger and more independent’, participants in both age groups generally rated individuals with an arm tattoo less favourably than the image of the same individual without the tattoo. Broussard said she was surprised “on the surface” that the two groups held similar views. “A lot of 19-year-olds have tattoos, so you would think that they would be more OK with them,” she says. 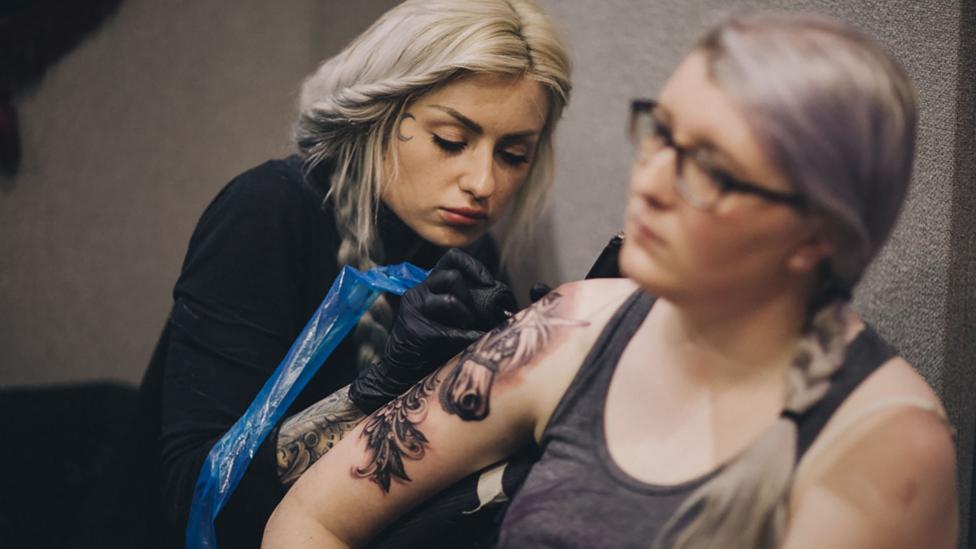 Although 38% of US millennials have a tattoo, only 30% say they keep it visible (Credit: Mykola Romanovksy)

But Broussard says that even when people have tattoos themselves, they can hold negative views on the subject. “People tend to internalise stigma. It doesn’t really matter if you have that identity or you have that characteristic like owning a tattoo. If there’s a very strong societal stigma against it, you will internalise it and still believe it. It’s this attitude that it’s OK for me, but not for them,” she explains.

So even if you’re a CEO with a tattoo you might not hire someone who has one. Johnny C Taylor Jr, president and CEO at the US-based Society for Human Resource Management, which represents around 300,000 HR professionals globally, says there’s a sliding scale of acceptability when it comes to tattoos.

“In terms of most acceptable to least acceptable, if you can hide it, it’s OK. Then there’s the employers who say you can have a tattoo, but it shouldn’t be a distraction; it covers half your face or is something that might offend other people, like a scantily-clad woman on the biceps of a man. Lastly, there’s the category of just not acceptable, and that typically means when tattoos show up on your face and it’s something that no one can avoid looking at, [or] when the nature is truly controversial, a swastika for example.

“More conservative industries, for example financial services, banking and healthcare, are going to be more conservative when it comes to tattoos,” Taylor adds. “We find a lot more liberal policies in entertainment, even in corporate entertainment where people at the most senior levels might have a visible tattoo. Those individuals would never do that if they were senior executives at a bank.” 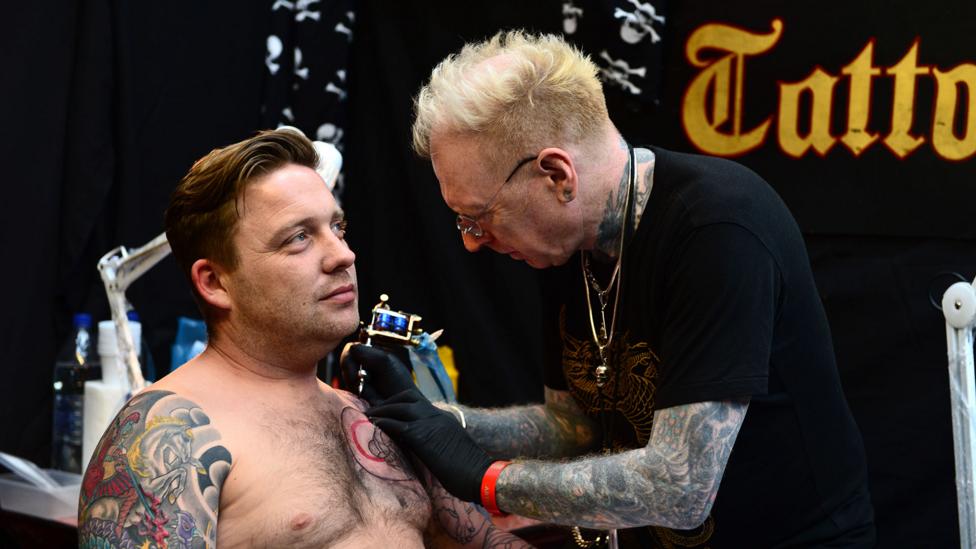 And in some countries, the very idea of a tattooed CEO is beyond the pale: Japan in particular has a fraught relationship with the art form. Tattoos have long been associated with yakuza, the Japanese gang members who were known for having intricate designs as a show of wealth, masculinity and the ability to endure pain. Tattoos were against the law until 1948 and, 70 years later, they’re still not generally seen as socially acceptable. The 2019 Rugby World Cup and the upcoming Olympics in Tokyo this year have highlighted the issue; in a country where displaying tattoos in public is taboo, should athletes and spectators cover up their body art?

This conservatism frustrates Yutaro, who co-owns Red Point studio in London but is originally from Chiba, near Tokyo. Taking a break from inking a customer with Hakutaku, a monstrous creature from Japanese and Chinese mythology, Yutaro – who goes by one name – vents his irritation. “Tattooing is a cultural phenomenon; people decorate their body to feel a certain way, but people in Japan are having a hard time breaking out of their mindset,” he says.

Attitudes about tattoos are often as complex as the designs themselves, but for fans of permanent body art, it’s a trend that’s here to stay.