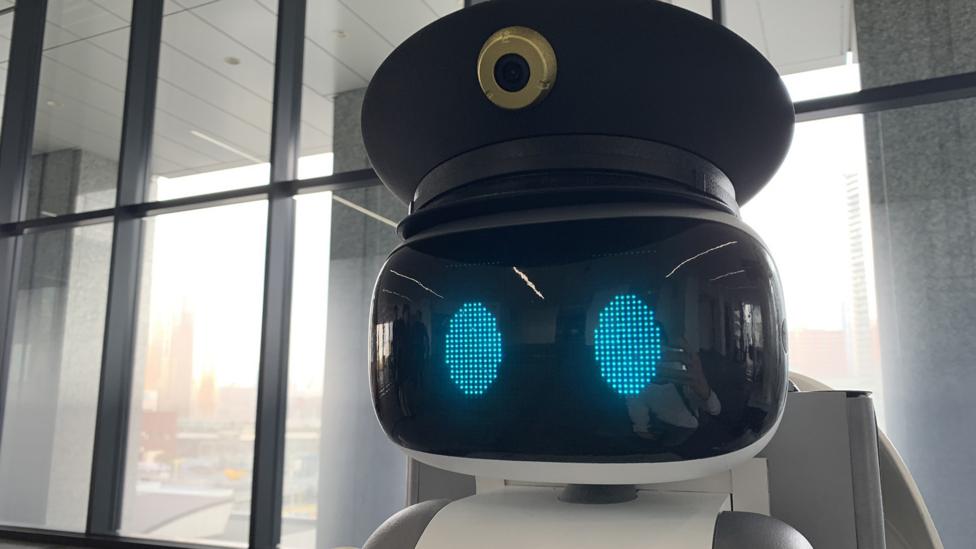 By Bryan Lufkin 6th February 2020
Japan is rolling out robots in nursing homes, offices and schools as its population ages and workforce shrinks. What can it teach other countries facing the same problems?
J

At a sleek office building in Shinagawa, Tokyo, workers are strolling in and out for lunch. As they walk through the glass doors, they pass two security guards, each dutifully flanking the passage in stern silence. It all seems pretty unremarkable, until you realise one of those security guards is a robot.

Standing up to five feet tall with wheels and a blue police cap, “his” name is Ugo. His battery lasts up to half a work day, and every two hours he’ll do a routine patrol around the building – even summoning lifts by pushing the call button himself. His digital “face” – which usually displays two big blue cartoony eyes – is replaced with the Japanese text for “on duty”.

“It’s important for the robot to feel cute, so you’re not intimidated,” says Ken Matsui, CEO of Mira Robotics, the start-up behind Ugo. Right now, the police bot – whose built-in camera allows guards downstairs to see things from the robot’s point of view – is one of only two prototypes in the country. But Matsui says companies in China and South Korea are interested in his company's work, which also includes cleaning robots for use in houses and schools. 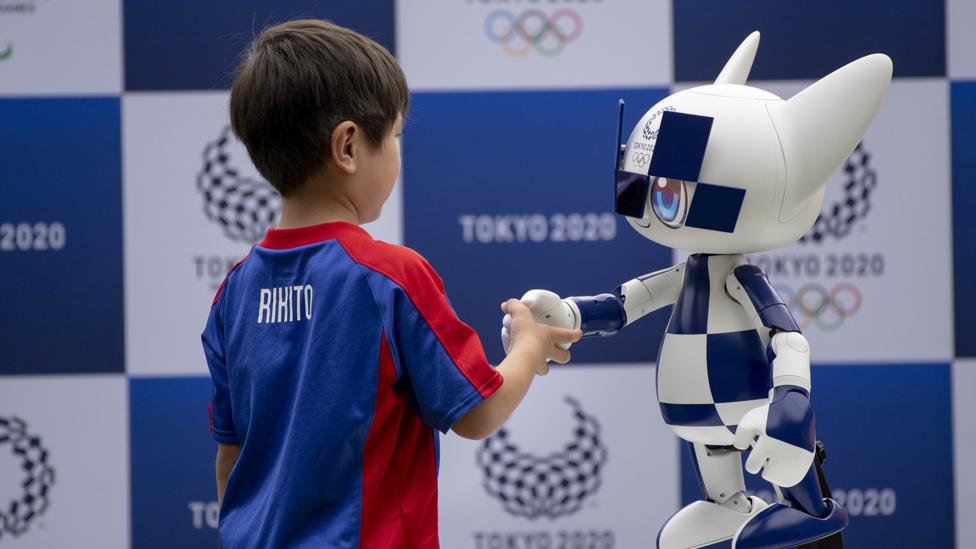 In recent years, headlines, pundits and politicians have often warned that we’re in the midst of a job-stealing robot revolution; but roboticists argue that their creations will complement, rather than replace, us. In Japan, the robots are already here – what’s more, many are actively embracing the robot age, from suburban nursing homes to the highest levels of government, which announced an investment of 100bn yen ($100m) in robot development a few years ago. Some entities are even highlighting robotic colleagues as a selling point to young, new recruits.

As the Tokyo 2020 Olympics approach – an arena for companies like Toyota to show off new humanoid robots that will interact with guests and help athletes on the field – the world’s attention is turned to Japan. And for good reason: amid fast global ageing and increased automation, it could be that Japan’s robot-friendly present is everyone else’s future. 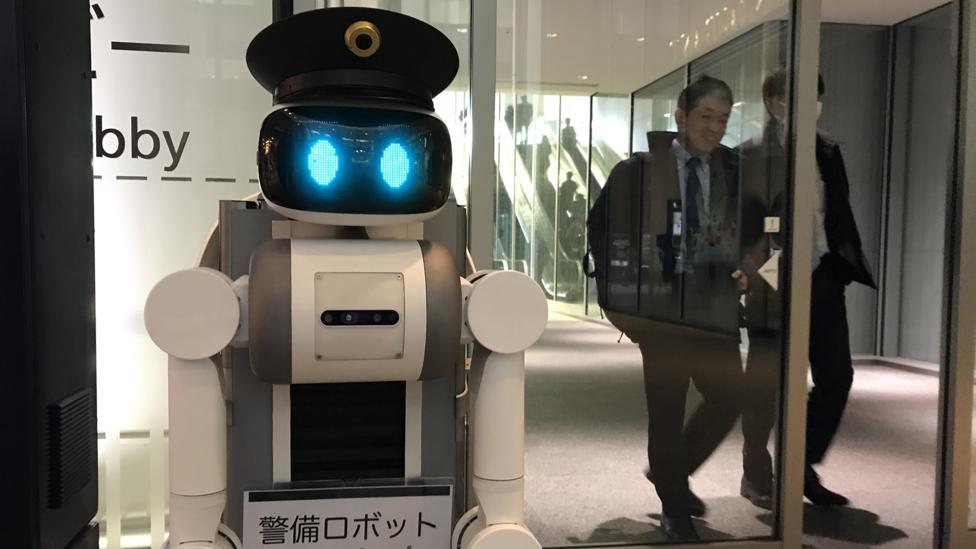 This police robot acts as eyes and ears for human officers in a different room. Countries like China and South Korea have expressed interest in such tech (Credit: Bryan Lufkin)

In Tokyo’s Silver Wing nursing home, about two dozen seniors are sitting in the common area as pudding cups are distributed. In the middle of the room is a staff member and a humanoid robot named Pepper, who is leading the room in group games and exercises.

Pepper's hosting a game of "guess the kanji", as a big screen shows super-magnified parts of Chinese characters that the crowd have to identify aloud. Many of the residents are dementia patients.

“We ask residents with dementia where they are and who they are in natural conversation with communication robots and human staff,” says Kimiya Ishikawa, director of Silver Wing. “It’s hard [for humans compared to robots] to remember each resident’s personal information, so robots are utilised [to help] in that area.”

Japan is facing major demographic challenges due to the elderly wave, low fertility rates and a shrinking population – Roger A Søraa

But it’s not only in the common room that robotics is being employed. Upstairs, staff have access to robotic exoskeletons that fit around the waist and lower back: these apparatuses ease the severe body strain as they help their elderly clients get in and out of bed. (Some studies have shown that over 80% of nurses in Japan experience lower back problems.)

“Japan is facing major demographic challenges due to the elderly wave, low fertility rates and a shrinking population. This leads to a number of issues facing Japanese society which the West can learn from,” says Roger A Søraa, robotics researcher at Centre for Technology and Society in Norway. “Elderly care facilities and hospitals see a severe lack of healthcare workers; there are not enough humans to do the tasks the way they used to be done.”

Kayoko Fujimoto, chairperson of trustees for the Ryusei Fukushikai Social Welfare Foundation, runs a nursing home in Hyogo prefecture, about 100km southwest of Kyoto. Last year she wrote a bestselling book seeking to reinvent the image of nursing home work, and she thinks robots can help.

At the Hyogo nursing home, staff have rolled out several robots that have been big hits with residents, like Paro the talking, fuzzy baby seal bot, which was developed a decade ago. Residents love to play with him because he’s cute, and the staff love him because he’s clean, doesn’t require food and no one’s allergic to him. 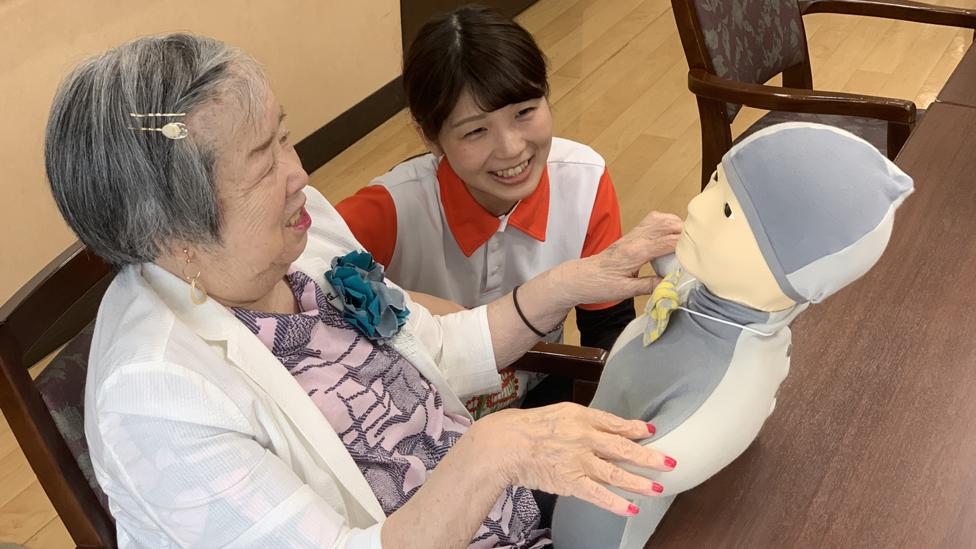 Critics call the Telenoid robot creepy, but government officials from around the world have visited this nursing home to see how it helps dementia patients (Credit: Bryan Lufkin)

One of the most popular additions is Telenoid: a baby-like robot with no legs and tiny arms. A staff member in a different room talks through the robot, and the voice comes out of its mouth. Some publications have criticised Telenoid as being creepy, but Fujimoto and her staff say it’s beloved by the residents.

One resident, a woman with dementia, holds a Telenoid as 27-year-old staff member Minami Okabe, down the hall, sings a Japanese folk song into a headset. The smiling resident holds Telenoid like a baby and says, “Let’s sing a song again”. The staff say that this particular patient is usually very quiet, but not with the robot. “It’s fun, seeing them react like that,” says Okabe, who’s worked at the nursing home for five years. “They react differently to the robots than they do to us.”

Telenoid was developed by Osaka University’s Hiroshi Ishiguro, the roboticist who made international headlines when he created his own android doppelgänger. He’s a celebrity in Japan, and he’s not the only high-profile tech entity Fujimoto’s worked with: there’s also Panasonic, NTT Docomo (Japan’s main mobile phone operator) and Daiwa House, Japan’s largest homebuilder. “In Japan, the speed of an ageing society is faster than in other countries, [so] the government is promoting developing robots,” says Fuijimoto. “We want to help as an experimental facility.”

Working in nursing homes, she says, has not traditionally been seen as an attractive job. Her hope is that talented young people will see how she is using new technology – from big, recognisable tech companies – and be enticed into this line of work. That was the case for Okabe, who read about how the home was using Telenoid in a leaflet. “There are many people, including students, who come here to see this,” she says. 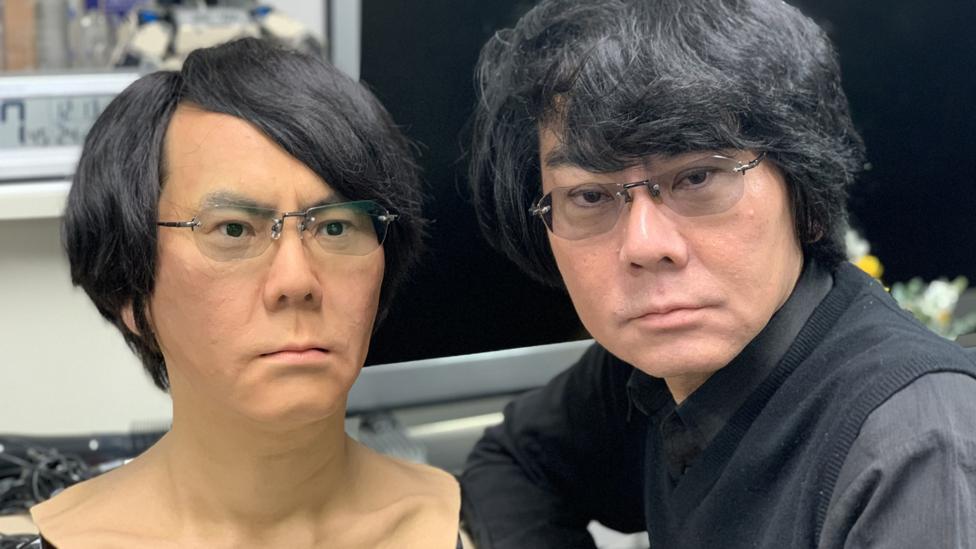 Hiroshi Ishiguro, famous for creating a robot doppelganger of himself, is one of many that say the robotic solutions in Japan will soon apply everywhere (Credit: Bryan Lufkin)

Japan is quite domestic-oriented, and we don’t accept many immigrants, so robots are more suitable – Ken Matsui

He also points out that China and the US, for example, are quickly catching up to Japan in areas like homecare robotics. “Ultimately, Japan is going to go from the top vendor for robotics globally, as it used to be, to being a relatively strong player alongside Germany, South Korea, Singapore and Taiwan,” he says. “[Japan] will lose influence relative to the Chinese and American robotics ecosystems.”

In fact, in one report released by the International Federation of Robotics last year, South Korea, not Japan, had the most industrial robots – manufacturing robots that assemble electronics and vehicles, for example – already in the workforce, with Germany not far behind. Plus, South Korea, like Japan, is also rapidly ageing, meaning local robotics companies are gearing products towards the demographic changes.

Yet in Japan’s favour is its very long history of embracing robots, not fearing them. In the West, pop culture and media often frame robots as job-stealing Terminators itching to start a revolution. In Japan, they’re often cute and cuddly; anime and manga have depicted robots as things to love. Others point to a respect for inanimate objects that’s rooted in Shintosim.

Another factor is ingrained resistance to immigration, despite the recent moves to allow more foreign workers in. As Japan’s workforce ages and shrinks, employers will struggle to fill low-wage jobs in retail or food service, for example. That’s prompted domestic calls to embrace robotics, with headlines like “Graying Japan wants automation, not immigration.” 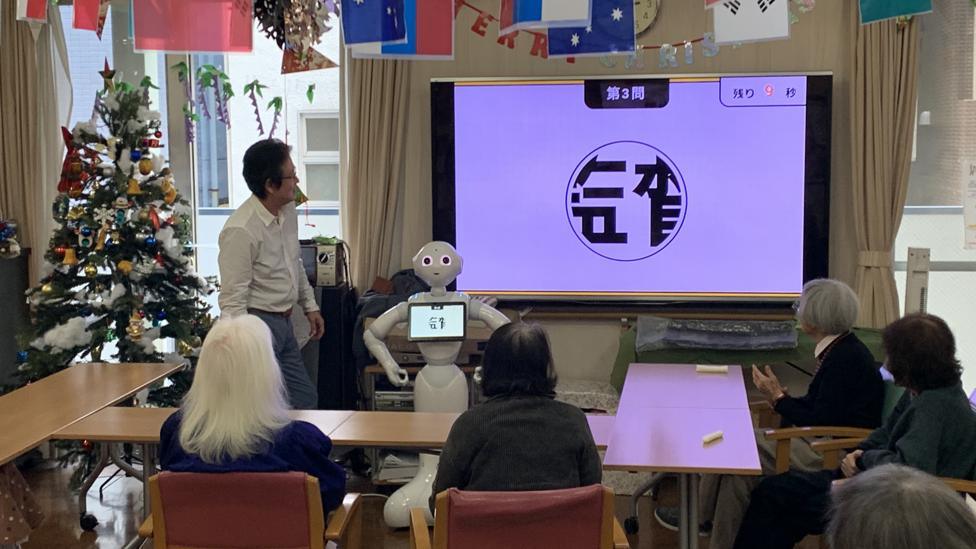 One area that needs workers is housekeeping services. With more pensioners and fewer workers, demand for in-house caregivers and cleaners is on the rise. That’s why Mira Robotics has also created a butler robot that can do simple tasks like wash dishes, fold clothes and vacuum, which are actually quite complex tasks for a robot.

"In other countries, like Hong Kong, the solution is to have more immigrants, but it’s not a perfect solution,” says Mira’s Matsui. “Japan is quite domestic-oriented, and we don’t accept many immigrants, so robots are more suitable."

Many of these robots – Ugo, Telenoid and others – can be used or monitored by humans from a remote location. That makes it possible for elderly or disabled individuals – people who might otherwise be excluded from the workforce – to command such robots, or even someone in a different city.

Not just Japan will have more robots, but the whole world – Hiroshi Ishiguro

Looking forward, Silver Wing’s Ishikawa says that major research is going into making social robots that can detect – and predict – healthcare changes in people. For example, the robots that record conversations to help human caregivers track a dementia patient’s progress could soon also monitor vital signs and, using AI, compare that data to a symptoms database, extract correlations and calculate the risk of a condition worsening.

Hiroshi Ishiguro, the Osaka University roboticist, says we’ll see other cute, communicative robots in places like hotel rooms or restaurants (where touch-screen menus are already commonplace in Japan) to assist guests in other languages. Meanwhile, government initiatives continue: last year, robots began to be rolled out in 500 classrooms across Japan to help teach English after a 250m yen ($2.3m) investment from the Education Ministry.

That could, in turn, help Japan’s younger generation grow up at ease with robots in a variety of environments. Ishiguro believes that they will integrate into our lives the same way smartphones did a decade ago. “Not just Japan will have more robots, but the whole world,” he predicts.

Whitton agrees, though he says the timescale is not yet clear. “I see all major economies adopting industrial policies related to robotics and other technologies in line with what China and Japan have been doing for decades,” he says.