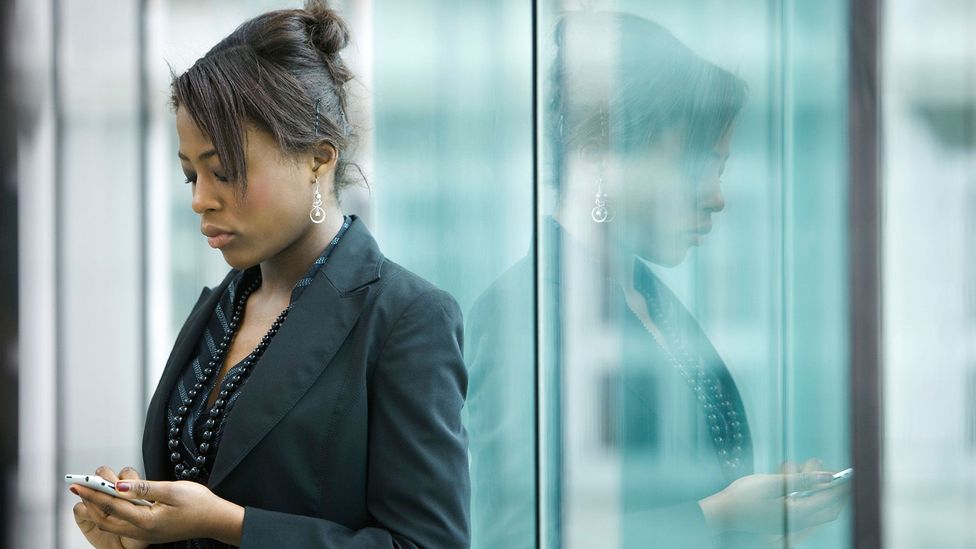 By Sheryl Nance-Nash 28th July 2020
Self-doubt and imposter syndrome permeate the workplace, but women, especially women of colour, are particularly likely to experience it. Why is this – and how can it be changed?
A

Although I haven’t worked in an office in more than 20 years, I still remember the feeling I used to have at my nine-to-five magazine job. No matter how well I did, I always felt that I wasn’t good enough for the rarefied publishing world. I didn’t come from a pedigree; I just was a hard-working black woman. I felt (and sometimes literally was) unacknowledged in the hallways, and my voice was hardly heard. It wasn’t unusual that ideas I presented at meetings got a lukewarm reception, but two meetings later someone else suggested a similar thought, which was instantly deemed a must-write story.

Even though I knew I was capable of doing the work, I was riddled with doubt. It was years later that I learned there was a term for what I felt: imposter syndrome.

You may not be able to see it around you, but imposter syndrome permeates the workplace. It’s a feeling that many people can identify with: why do I feel like a fraud even though I’m eminently qualified for this job? Despite having education and training, many have never been able to break free of doubting their worthiness and step into any a higher level of success.

But although anyone can ask this question, imposter syndrome has an outsize effect on certain groups.

“Women, women of colour, especially black women, as well as the LGBTQ community are most at risk,” says Brian Daniel Norton, a psychotherapist and executive coach in New York. “When you experience systemic oppression or are directly or indirectly told your whole life that you are less-than or underserving of success and you begin to achieve things in a way that goes against a long-standing narrative in the mind, imposter syndrome will occur.”

If you doubt yourself even when you’re doing all the right things, are you doomed to feel like an imposter, no matter what? And why, exactly, do we feel imposter syndrome – and what can we do when that feeling starts to boil up?

According to Lean In, a US organisation that focuses on women in the workplace, women are less likely to be hired and promoted to manager. Its 2019 research shows that for every 100 men brought onto teams and elevated to management, only 72 women experience the same thing. Men hold 62% of manager-level positions, while women hold just 38%. And although one-third of the companies Lean In surveyed set gender representation targets for first-level manager roles, 41% of them didn’t for senior levels of management. 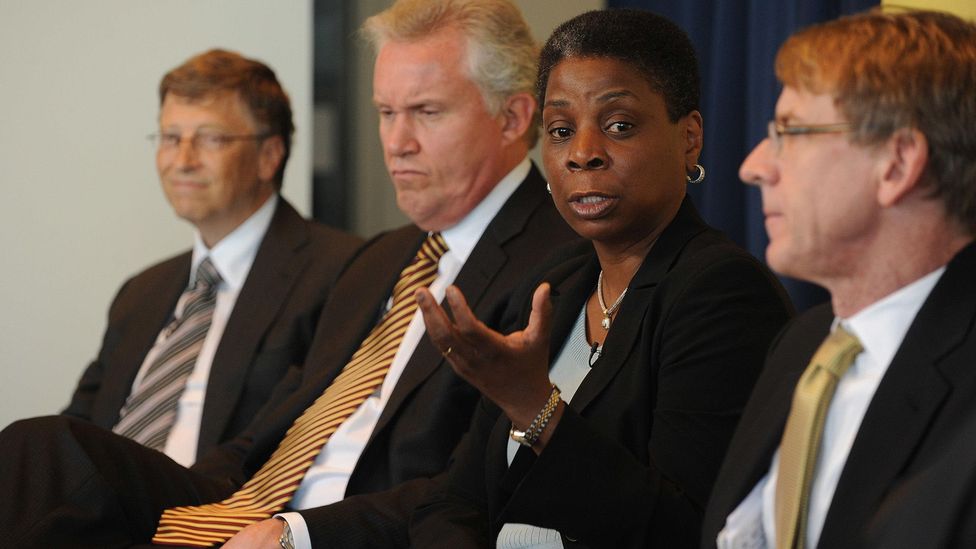 CEOs who are women of colour are still rare. Xerox's Ursula Burns was the only black, female CEO of a Fortune 500 firm, who left the company in 2016 (Credit: Alamy)

And despite progress in the boardroom, where diverse voices have been historically absent, women still don’t have near-equal representation. According to Catalyst data for 2019, women in the US held 26.1% of directorships, up from 20.3% in 2016. Women in the UK fared slightly better, holding 31.7% of directorships, up from 25.3%. But even in the top-rated country, France, women only hold 44.3% of directorships, up from 37.6% in 2016. Additionally, women of colour are all but non-existent on corporate boards: Catalyst reports that fewer than 5% of US corporate board seats are held by women of colour, despite being 18% of the US population. The only black woman to ever head up a Fortune 500 company as CEO was Xerox's Ursula Burns, who left the company in 2016.

The lack of role models for marginalised communities has a major impact on making people feel like they do – or don’t – belong in these corporate environments. Without this representation, there’s no “signal of the possibility of advancement… [or] how they managed the realities of stereotype, stigma and oppression in order to advance”, says Thema Bryant-Davis, a black psychologist and professor of psychology at Pepperdine University in California.

“We’re more likely to experience imposter syndrome if we don't see many examples of people who look like us or share our background who are clearly succeeding in our field,” adds Emily Hu, a clinical psychologist in Los Angeles. “This is especially true for black and indigenous people, for whom overall representation across almost all white-collar fields is alarmingly low.”

But lack of physical representation is just one of the factors that feeds into imposter syndrome. For instance, pervasive racist and sexist stereotypes can cause marginalised people to doubt themselves, says Bryant-Davis. She points to common messaging such as that women are not good leaders because they're too emotional; women are not good at maths or science; black, indigenous and other people of colour are lazy, unintelligent or lack integrity.

Even the traditional focus on female beauty can make an impact on self-doubt. “If you've grown up with messages that you're only valued for your looks and your body, not your skills or intelligence, you may end up getting a certain job or position and wondering whether you truly deserve it or if the hiring manager just thought you were a pretty face,” says Hu.

‘Underqualified and in over my head’

Maureen Zappala is a former propulsion engineer – a literal rocket scientist. But despite working at the US’s renowned National Aeronautics and Space Administration (Nasa) for 13 years in the 80s and 90s, and reaching a mid-level management position, Zappala was still beset with self-doubt.

“For years I thought Nasa only hired me because they needed women. I felt under-qualified and in over my head. I worked long hours to try to prove myself. I was too afraid to ask for help because I thought if I'm really as smart as they think I am, I shouldn't need the help, and I should be able to figure this out on my own," she says.

Even after being promoted, she constantly second-guessed her decisions. “Even though people raved about my people skills, and how I knew the facility inside out, and how I was really good at project management, I refused to objectively look at that data that said I was qualified,” says Zappala, who is now a professional speaker and author of Pushing Your Envelope: How Smart People Defeat Self-Doubt and Live with Bold Enthusiasm.

That never-ending doubt can do damage both professionally and personally. 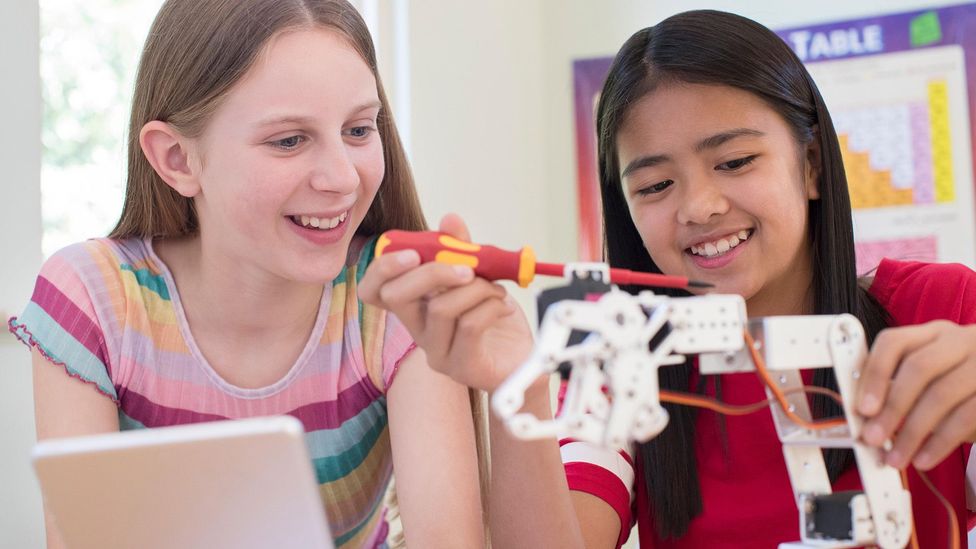 Though society is changing, girls are often conditioned to think that they shouldn't go into maths or science, which can manifest as imposter syndrome in adulthood (Credit: Alamy)

Jaime-Alexis Fowler is founder and executive director of Empower Work, a San Francisco-based non-profit that provides a crisis text line for workers, and says that imposter syndrome is one of the top issues that people reach out about. “They're overwhelmed, stressed, in many ways paralysed by this sense that no matter what they are doing, it's not enough, or that someone is going to find out that they don't know what they think they know. They feel like a 'fraud', or that they're never going to be qualified enough,” says Fowler. The professional anxiety spills over into their day-to-day mental health, she adds. “They have anxiety, stress, lack of sleep, an inability to focus and more.”

Doubt and stress from imposter syndrome can thwart your career trajectory, too. “You may not seek better opportunities due to fear of being exposed as a fraud, or it could cause your management style to not be as effective due to micro-management, perfectionism and lack of confidence,” says Richard Orbé-Austin, psychologist and co-author of Own Your Greatness: Overcome Impostor Syndrome, Beat Self-Doubt, and Succeed in Life.

From fear to faith

Even if you know the sources of your imposter syndrome, the feeling can still be hard to shake.

“Talking about your imposter syndrome is the first step to dealing with it, rather than suffering in silence,” says Orbé-Austin. “Identify allies and advocates in the workplace who believe in you and are supportive of you professionally.”

Check in with your colleagues and peers in the field, especially other women and people of colour. “Don't be afraid to admit you're struggling. Ninety-nine percent of the time, you're not the only one doubting yourself,” says Hu. This goes a long way toward validating the way you're feeling, which can be helpful for convincing yourself that the imposter syndrome actually isn't real the next time you experience it, she says.

I was a woman in a foreign country with no business experience, working in a field that is to this day overwhelmingly white and male. How could I be an executive? - Rana el Kaliouby

Hu adds that it’s also important to silence your inner critic, and look toward your strengths. “We tend to over-focus on the negatives when we feel imposter syndrome, only paying attention to supposed failures or deficiencies,” she says. “Give yourself credit for your accomplishments. It may be hard at first because your mind will try to keep minimising the good stuff that you do, but keep trying.”

And know that it is possible to get past your sticking points.

Several years ago, Rana el Kaliouby left Egypt to move to the US to pursue a career in artificial intelligence. She worked at MIT and did well, which led her to co-found Affectiva, an emotion-measurement technology company in Boston.

“I had no faith in my ability to lead,” says el Kaliouby. “I was a woman in a foreign country with no business experience, working in a field that is to this day overwhelmingly white and male. How could I be an executive? I told myself I couldn't, and we opted to hire a seasoned business executive to serve as CEO.”

After a few years with the company, their first CEO moved on. Some board members recommended Kaliouby step into the role, but she had a lot of doubts. “I’d never been a CEO before, so how could I take this on? The voice in my head told me I can’t, I shouldn’t and that I’d fail.”

But after Affectiva’s head of sales raised his hand to take the job, despite never having been a CEO either, el Kaliouby says that she “realised that women often don’t raise their hand unless they check all of the boxes. But when I sat down and thought about what a CEO does – and what I was doing – I realised I was not only ready for the job, but I was already doing it. I summoned my courage, approached the executive team and the board, and ultimately stepped into the role.”

Four years later, el Kaliouby isn’t totally free of self-doubt – but she’s in a much better place with her imposter syndrome. “Sometimes I still hear the ‘Debbie Downer’ voice in my head. But I have learned to reframe the message. It is now my advocate, not my adversary, challenging me to move forward out of my comfort zone.”