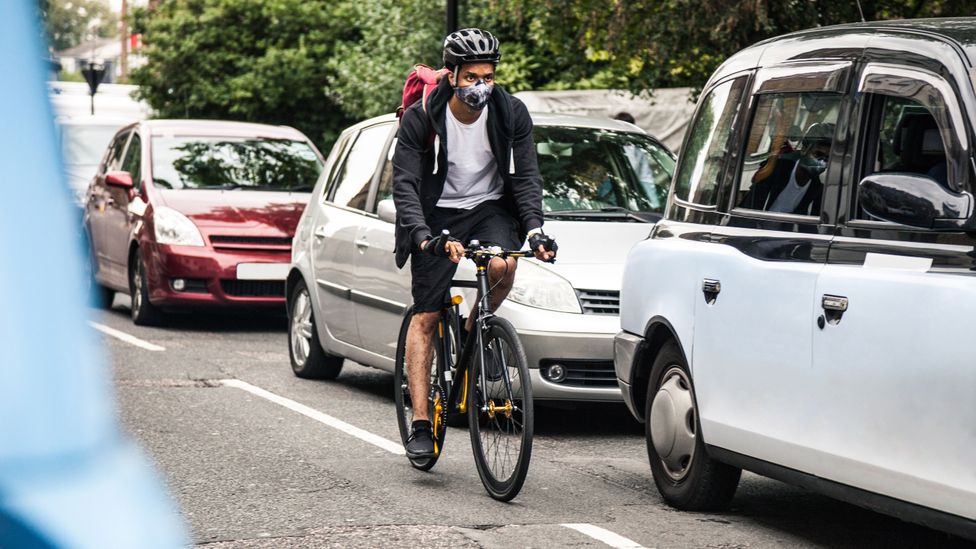 Cycling has flourished during Covid-19. Many people nervous about public transport or making greater use of their local areas have been getting around on two (or three) wheels. In the UK, some cycle shops have found it hard to keep up with the demand. In China, Beijing’s bike-share system was used 150% more in March, while cycling traffic in Dundee, Scotland grew by 94% in April.

Local governments have responded to the interest by carving out pop-up bike lanes in many cities including Bogotá. Brussels has lowered speed limits for drivers. Paris has subsidised e-bike purchases and reimbursed bike repairs as well as created more bike parking spaces. And in many places, reduced traffic has encouraged inexperienced cyclists who might shun busier roads.

The pandemic has shown that with will and resources, change can happen fast. Yet fast typically doesn’t mean thoughtful. Even before Covid-19, the voices involved in discussions about cycling infrastructure often lacked diversity of race, gender, class, physical ability and even cycling style. Without widening consultation to include a broader range of perspectives, it’s not clear whether any post-pandemic shift to urban cycling will lead to greater inclusivity.

The pandemic has shown that with will and resources, change can happen fast. Yet fast typically doesn’t mean thoughtful

In general, cities don’t cater to cyclists equally. From New York to Bogotá, bike lanes and bike-share docking stations, if they exist, tend to be located in whiter, wealthier neighbourhoods.

Cycling infrastructure is often a component of gentrification, as cities attempt to woo the kinds of upwardly mobile professionals who are attracted to areas with such amenities. “The dominant approach has been a gentrification model of associating bicycle development with urban renewal projects,” says Adonia Lugo, a cultural anthropologist who researches urban cycling at Antioch University in Los Angeles.

Yet this favours the kinds of cyclists officials want to see, rather than the kinds of cyclists already depending on bikes. White-collar workers with helmets, high-vis vests and bright lights might be especially conspicuous in city centres, but they’re not the majority. In the US, low-income people are more likely than well-off hipsters to cycle to work. As of 2015, about half of US cyclists earned less than $25,000 per year. 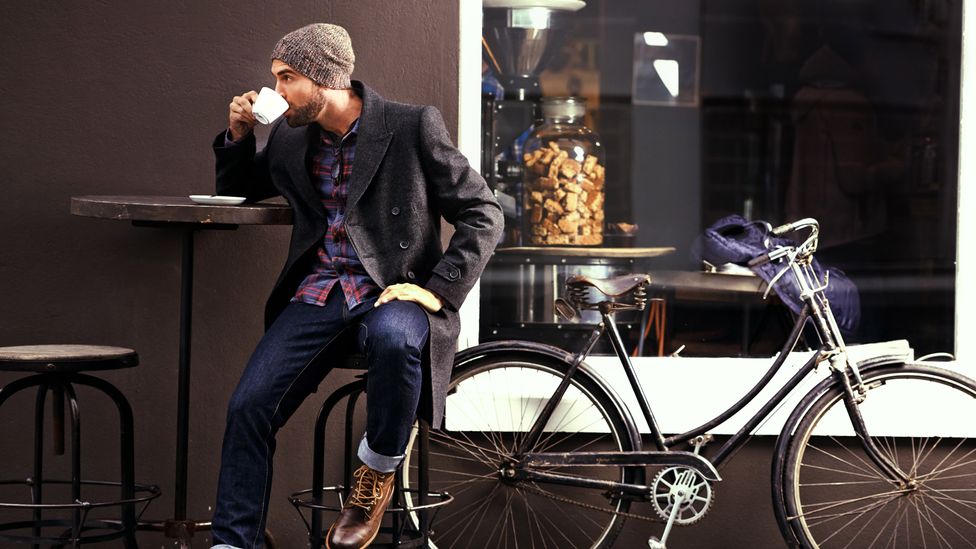 Historically, a small elite of cyclists has influenced cycling policies. Traditionally members of recreational cycle clubs, these impassioned, well-meaning cyclists have the clout to cultivate relationships with local officials. They’ve tended to advocate for policies that benefit them, but don’t necessarily work for people with different backgrounds, needs and neighbourhood realities. And because urban and transport planning have been mostly niche, homogeneous professions, planners have traditionally had more in common with these privileged cyclists than with other kinds of bike riders.

In London, the common perception that cycling is dominated by a particular demographic – well-off male professionals who can afford specialist bikes and performance clothing – can lead to stereotyping based on income, race and gender. There may be some grounds for this – in 2017, only 27% of current cycle trips in London were made by women and 15% by BAME individuals, according to a Transport for London report. A 2011 report by public health researchers showed a circular effect of the belief that cycling is only for affluent white men. For instance, “the very invisibility of Black and Asian cyclists reduces their opportunities to see cycling as a candidate mode of transport”.

Behavioural and institutional patterns, as well as infrastructure, can make new cyclists feel welcome. In the US, aggressive policing disproportionately targets immigrant, black, low-income cyclists. For example, a study in Oakland, where 28% of the population is black, showed that 60% of cyclists pulled over by the police were black. Similar patterns have been reported for other US cities.

In the US, low-income people are more likely than well-off hipsters to cycle to work

This may not deter people cycling out of necessity, but skewed policing contributes to skewed perceptions about the kinds of cycling that are ideal. It also leads to stigmatisation and reduced safety of certain groups. This neglects the reasons for racial disparities in helmet wearing, for instance. And in one example of environmental injustice, highways in the US have been disproportionately sited in ethnic-minority areas. This has limited the space for cycling and made one vilified behaviour – cycling on the pavement – more common in some areas. Overall, putting the onus on individual cyclists to make themselves safe by outfitting themselves with accessories shifts responsibility away from city authorities for designing safer streets.

The picture is very different in The Netherlands, which famously has more bikes than people. 27% of trips made by Dutch residents are by bike (compared to under 1% of daily trips in the US). It’s a nation in which cycling is more inclusive than other countries – though as pointed out by Isabelle Clement, the director of NGO Wheels for Wellbeing, that inclusiveness has sometimes been more accidental than deliberate.

Unlike in cities like Los Angeles, in Amsterdam “no one associates going by bike with poverty”, according to Lia Karsten, an urban geographer at the University of Amsterdam. Nor is cycling necessarily a marker of affluence. This is the result of decades of sustained policy, including devoting a great deal of space to cycling on the roads, in the laws, in parking spaces and even in school curricula. And it’s eased by Amsterdam’s relatively flat and compact geography.

In part because of the large number of parents who use cargo bikes, for instance, easy turning circles, step-free lifts and larger bike shelters are common. These kinds of design features benefit not just parents toting kids, but also people with bigger adaptive cycles and delivery cyclists – showing the complementarities of inclusive design. Nor is it standard to associate cycling with a certain kind of physical prowess. Fewer than 1% of Dutch cyclists wear helmets, in a country where casual, everyday cycling has been called “a form of walking-with-wheels”. 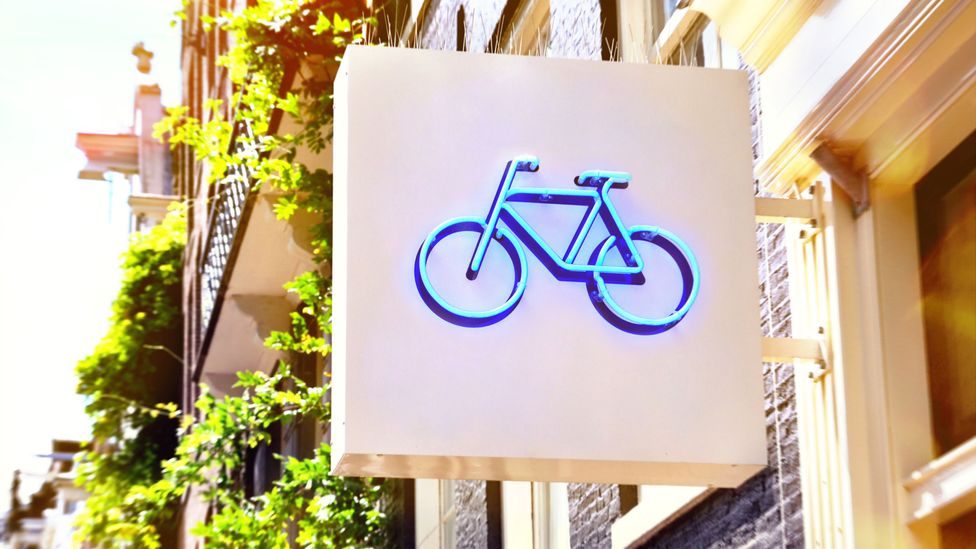 Karsten says that cycling in the Netherlands spans income classes, although there are differences across ethnicity and cultural backgrounds. Immigrants (particularly immigrant women) tend to cycle less than people born in the Netherlands, in part because the foreign-born have less exposure to cycling from a young age.

And according to Karsten, one effect of the pandemic has been to exacerbate an existing issue in Amsterdam: overcrowding in bike lanes. This has made middle-class parents, and increasingly working-class parents, nervous about children (and elderly people) using bike lanes independently. Karsten hopes that increased attention to packed bike lanes will encourage policymakers to devote less space to cars.

Overall, however, there are numerous benefits from the normalisation of cycling. One study estimates that cycling has contributed a half-year to Dutch life expectancy, with health benefits that represent over 3% of Dutch GDP, and that residents cycle most in their late 60s. Though imperfect, the Dutch model suggests that more inclusive cycling can be developed by making cycling appealing and accessible to people of all income groups, and by taking the long view.

Turning a boom into a cultural shift

Partly inspired by the Dutch model, the UK government announced on 28 July a £2bn ($2.58bn) plan to make the UK more cyclist- and pedestrian-friendly. The plan includes bike repair vouchers, enhanced lorry safety standards, and the creation of additional “mini Hollands”. However, the opposition Labour Party has criticised this plan for being too slow to come into effect.

But being able to take long view can feel like a luxury during these uncertain days. Some urban planners are frank about inclusion being a casualty of the rapidly implemented bike measures. During a recent online discussion on how UK cities are being adapted for active travel, Mel Cazzato, a cycling planner for Transport for London, acknowledged, “We don’t always have the time to consult that we did before in the normal way. Your average cycle route previously used to take several years to plan and deliver. But you’ve had to find innovative ways to compress these timescales into months and in some cases weeks.”

Yet as lockdowns ease, more lasting changes will be needed to ensure that people continue riding (and thus that cities continue to benefit from cleaner air, fewer road deaths and healthier residents). This could include physically separating cycles from cars – rather than simply marking streets to temporarily designate bike paths/mobility lanes. More secure barriers will be especially important to keep women riding as motorists return to the road. Milan and Seattle are among the cities making bike-friendly changes permanent. 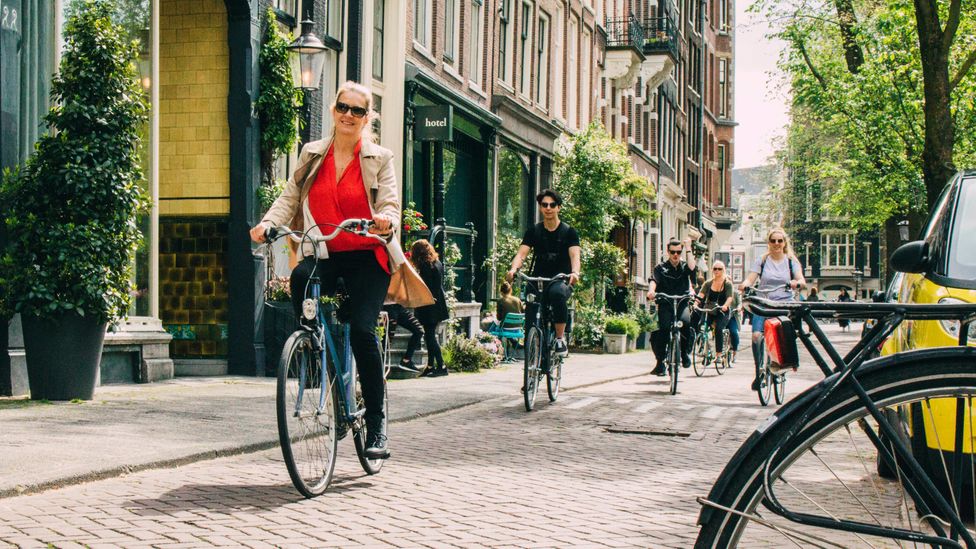 27% of trips made by Dutch residents are by bike, compared to under 1% of daily trips in the US. (Credit: Getty Images)

Clement, of Wheels for Wellbeing, is advocating for some more thoughtful planning at this stage of the pandemic. A handcyclist, she’s one of the 66% of disabled people in London who are able to ride a bike (although adaptive cycles tend to be expensive). She’s frustrated that transport planners and engineers don’t seem to consider that “cyclists are not all cycling on two wheels and are not all young 20 to 40-year-old males”. A lack of ramps and dropped kerbs are examples.

She argues that in mobility planning during Covid-19, “disabled people seem to have been forgotten pretty much, because it’s all been done in a rush”. Wheels for Wellbeing are calling for local authorities to consult and be responsive to people with disabilities in the post-lockdown recovery, “because otherwise you’re just piling on inequality and inequality, and excluding people from their own environment” – that is, keeping people from being able to use the streets and public spaces in their own neighbourhoods.

So post-lockdown cycling planning has to grapple with complex legacies. Recent history offers some lessons. Lugo says that after the Great Recession that began in 2007, urban cycling boomed. Yet as the economy improved, many people shifted transport modes away from cycling; “a boom movement doesn’t necessarily translate into a cultural shift”.

Yet she does believe that as countries begin easing out of lockdown, there’s an opportunity for cycling advocates to model more inclusive forms of cycling development. It’s long overdue to actually listen to residents – all groups of residents – when redesigning city mobility. This would help to overcome the blind spots that Clement, Lugo and others have witnessed in transport planners. Lugo says of bike development planning, “I’m hoping that now there can be some more reflection about whether that’s a strategy that changes, that breaks with our past in terms of planning practices that leave out marginalised communities, or whether that’s kind of a continuation.”